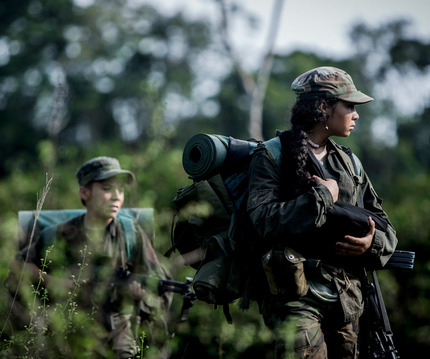 The sophomore feature of Colombian director José Luis Rugeles, Alias Maria world-premiered in the Cannes Un Certain Regard sidebar before being programmed in the Warsaw Film Festival's Discoveries section which rounds up cherry-picked worthy-to-see films from around the festival circuit. The drama tackles the infamous subject of child soldiers and child exploitation in a broader sense. Rugeles tackles the theme through the even more inconvenient and human-rights-startling angle of motherhood of an underage guerrilla fighter bearing a child and a loaded gun as a child herself amidst the gunfire.
Alias Maria pursues - closely and incessantly - the titular heroine Maria (Karen Torres), a 13-year old female child soldier in guerrilla squadrons buried deep in lush jungle. Maria witnesses a fellow fighter giving birth, a privilege reserved for just a few under given conditions. All women are expected to come forward and declare the pregnancy for an early termination, a clear order to be rigorously obeyed. Maria herself is hiding the ticking bomb inside her womb, concealing the fact she is four months pregnant from colleagues and the father to be: her commanding officer. A twist of fate finds her entrusted with guarding and transporting a newborn, generously granted to enter the violent and unforgiving world, into safety and out of the combat zone while contemplating her next move.
The ongoing Colombian conflict between leftist guerrillas and right-wing militia forms the backdrop for the story with the director refusing to waste time elaborating the indubitable "war is bad" jeremiad, as the presence of pregnant teenager and a boy too young to be fending for himself, let alone be armed, delivers the blunt message with no further ado.
While a fictional narrative the film's theme brushes shoulders with recent similarly tuned and alarming docu-pieces on child exploitation, as both film´s ill-fitted combatants are treated as physical equals to their adult counterparts in highly demanding conditions. They are expected to follow the same orders, with no special regards taken considering their tender age and fragile bodies. However, a double standard pervadess the demeanour of their colleagues who treat them as lower species. The weakest member of the party, the little boy (Erik Ruiz), doesn´t enjoy much respect from his co-combatants that bully him during a dangerous mission as in silly expectation that the tough handling would miraculously man him up while remaining oblivious to the obvious.
The director inserts at several occasion close-ups of hardworking ants carrying leafs of much bigger weight than themselves serving as a constant remainder of the kids' triumph and continual grasping beyond their limits, both physically and mentally. Screenwriter Diego Vivanco doesn´t provide any background or clearer motives on how two kids ended up in such company nor why they continue to put up with the coarse treatment though the penalty for desertion is likely to be the sure answer for the latter. The anonymity of the protagonist thrusts viewers into the position of keen observers trying to fathom the circumstances and possible reasons these children have been pulled from a safe family environment. No further allusions are given toward their parents. For a brief moment, Maria encounters a group of peers upon which her tired gaze lingers bit too long in a mute indication of lost innocence. A way too early and too violently.
Both central figures, Maria and the little boy, bifurcate the film´s theme into two planes. The prevailing one underlines the unethical and alarming status of child-soldiers in an indictment of the amoral exploitation. Underage pregnant Maria points towards another aspect- female-child mishandling - despite the hazy assumption whether the act was really consensual.
On the other hand, the awakening of her will power driving her to protect the unborn child at highest costs stands in as a strong memento. The dedication at the end of film suggests that Alias Maria conveys an expression of admiration to all women toughened in the fire of ruthless circumstances yet resolute to not surrender by such discouraging development. A testament to female power etched by male hand in strong gesture of admiration.
Alias Maria carries also a social message that should dissuade not necessarily only Colombian youth and youngsters putting their hands on arms and jumping into a conflict. The average age of recruits was estimated at only 13 years in Colombia two years ago, a disturbing revelation. Rugeles employs a didactical approach scarcely to not compromise the film´s overall style though the few examples underline resolutely the perils of being a child soldier, if somebody should though otherwise in a twisted notion originating in videogame-induced fantasies.
The director and his cinematographer Sergio Iván Castaño capitalized on the environment not only in the depiction of harsh conditions. Force to navigate a milieu of ever-present threat reflects Maria´s life situation when her careless childhood is violently replaced by daily survivalistic struggle with bleak prospects for what is usually considered a normal life. Especially in such extreme situations where she must rely on anybody but herself and even the tiniest misstep might be the last one.
Tweet Post Submit

Do you feel this content is inappropriate or infringes upon your rights? Click here to report it, or see our DMCA policy.
Alias MariaColombiadramaJosé Luis RugelesWarsaw