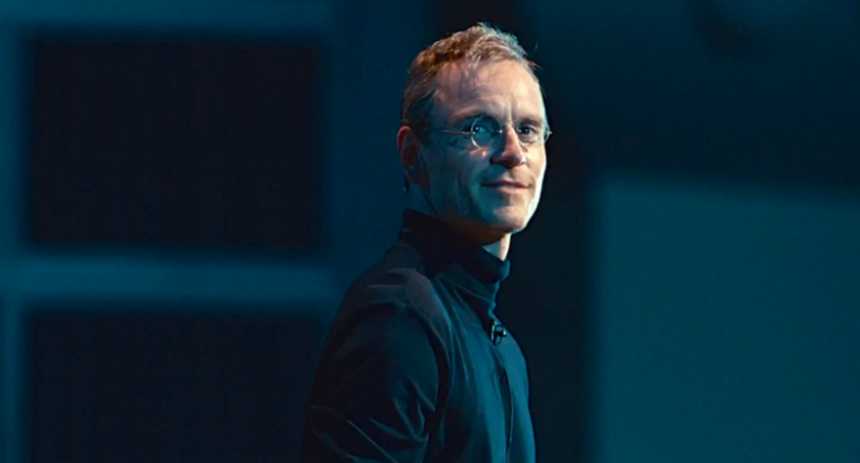 The first question is: do we really need another Steve Jobs movie? Then, what merits does the life of the billionaire co-founder of Apple have, to prompt three movies (Jobs, Steve Jobs: the Man in the Machine, and now Steve Jobs) about him within two years? Yes, Apple product is cool, but what else is there to talk about?

I have to admit that I've been an Apple user all my adult life. It's not because of brand loyalty, but because I inherited a Mac Classic II from my ex-girlfriend in college. Since then I rarely used PC other than some odd office jobs I've briefly held. I was too young to have seen the famous 1984 Apple commercial, and have never been a good consumer who would grow feelings of attachment with inanimate objects, to be honest.

The new Steve Jobs movie, called Steve Jobs, based on Walter Isaacson's biography, scripted by Aaron Sorkin and directed by Danny Boyle, is as exciting as a production of a high school play. This ill conceived film stars Michael Fassbender as Jobs, an innovator of Apple products, Kate Winslet (in her annoying Polish accent) as his trusty, long-time marketing director Joanna Hoffman, and Seth Rogen as Steve Wozniak, the disgruntled engineer and co-founder of Apple. For the next breezy two hours, we go from one launching event (the launch of the original Macintosh computer in 1984) to another (NeXT in 1988) to another (iMac in 1998), signifying three phases in Jobs's career.

It is Seth Rogen who steals the show as Wozniak, though. Forever not credited by the ungrateful Jobs for creating Apple II, which was the bread and butter for the company for a long time, he is the only one who shows some real emotions in the film, demanding Jobs to mention him and his team in all three launching events. His cuddly presence also balances out the dead-eyed, angular Fassbender and their antiseptic surroundings. Jeff Daniels cakewalks through the screen as John Sculley, a Pepsi executive turned CEO of Apple who fired Jobs from Apple but was apparently a father figure for Jobs.

No one disputes Sorkin's penchant for snappy dialog and just like in The Social Network, Steve Jobs is full of it. So much so, you wonder, if casting these esteemed actors were really necessary, when they are just mouthing the great Sorkin dialog when there is so little drama. In The Social Network, however artificial Fincher's filmmaking generally is, there was movement, fluidity, breath and scope. But with Steve Jobs, boxed in convention halls and other indoor spaces, one can't escape the feeling of watching a play.

So the meat of the story is this: whatever chips he has on his shoulders, Jobs wouldn't recognize Lisa (played by Makenzie Moss and Perla Haney-Jardine, respectively) as his daughter. There are 28 percent of all men in the country who can be her father, according to his algorithm. Her no-good mom Chrisann Brennan (Katherine Waterston) keeps asking him for money. He is also a ruthless and egotistical leader who is never wrong. Would he find his way to admit that he is not perfect?

This trend of 'giving a billionaire dick a pass in life because they are only human and have flaws' storyline is getting on my nerves. Sorkin hit it big with the young, hip demographic (under 25, white, college educated) with The Social Network but his HBO series The Newsroom was only viewed and appreciated by my mother-in-law. His street cred is gone. Steve Jobs is a massive waste of talent and money and Danny Boyle is not the director who is up to the challenge of making gold out of nothing, which Steve Jobs is.

Do you feel this content is inappropriate or infringes upon your rights? Click here to report it, or see our DMCA policy.
biopicdanny boylenew york film festivalreviewsteve jobs