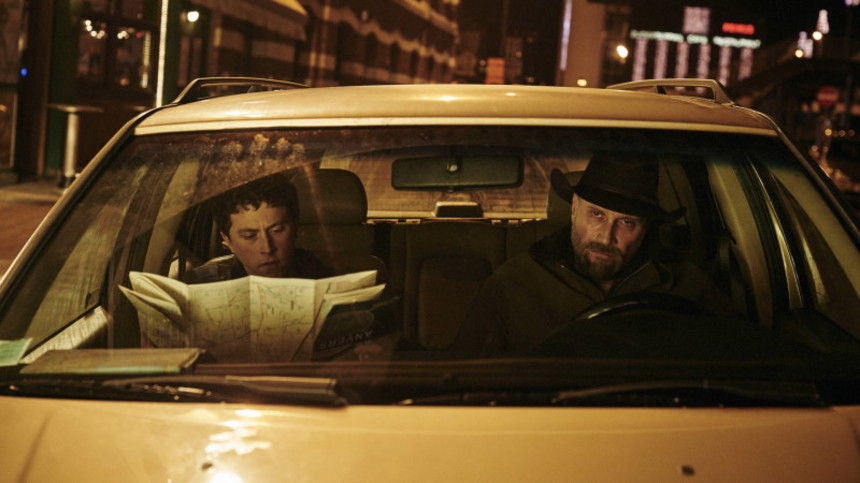 Thomas Bidegain's film, Les Cowboys, begins in a strange key, with a nuclear French family spending the day at an American Western-themed rodeo (not that there's any other real kind). It's clearly no casual affair for them, but a practiced tradition--papa sings the "Tennessee Waltz," and they all seem well-trained in the art of square dancing. Somehow though, between hearty laughs and loving, knowing glances, the teenaged daughter of the family has intentionally disappeared.

The family's patriarch, Alain (played by Francois Damiens), immediately launches headlong into an obsessive search for the girl, fueled by thinly-veiled hatred as he discovers that she's eloped with her Muslim boyfriend. Alain follows through on false lead after false lead, until a time jump eventually reveals that his son is now a young adult, his wife has left him, and he has become a desperate specter stripped of his power as a father and husband; yet still he searches.

Not shockingly, John Ford's 1956 classic The Searchers served as a chief source of inspiration for the film. Unlike John Wayne's charismatic aging cowboy, though, Alain is never cool nor valiant in spite of his racism and chauvinism. He's ugly and pitiful for it. He isn't the hero, and director Bidegain makes this bitterly clear--allowing for Alain's now-grown son Georges to give the search a new sense of compassion, empathy, and morality. Things become less about finding a so-called 'kidnapped' white girl, and more about understanding why people choose (or end up on, regardless of choice) the paths they do. Georges accepts that his sister may not want to speak to him once found, and he harbors no intention to denounce her newfound religion, nor metaphorically drag her back by the hair.

Les Cowboys strikes a respectable balance between condemning Islamaphobia and portraying a social climate that could conceivably foster it. News clips and radio reports of non-fictional terrorist acts are used to discreetly build a tension that continues to mount as the film's timespan progresses, without ever devolving into sensationalism. Needless to say, the film is all the more relevant in light of the fallout after the Charlie Hebdo attacks, but this connection remains implicit, not explicit.

Bidegain is a prolific screenwriter, here directing for the first time, and the film is not especially innovative in the visual department. There are stretches when the pacing feels uneven, and the focus of the movie is unclear--but more often than not, it uses these aspects to its credit. The performances are generally impressive, including John C. Reilly's turn as a mysterious man who turns up along the way and spouts a couple of ambivalent truisms.

Les Cowboys is not groundbreaking cinema, yet unlike many other films that may be equally 'good,' it demonstrates a willingness to wrestle with complex issues and ideas, tossing them around and leaving it up to the audience to settle them. For a debut feature, that's exceedingly rare, and should be valued accordingly.

Do you feel this content is inappropriate or infringes upon your rights? Click here to report it, or see our DMCA policy.
2015franceles cowboysnew yorknyffthomas bidegain