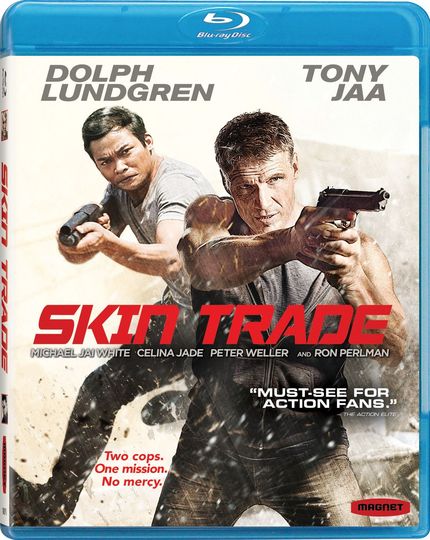 Thanks to our friends at Magnet Releasing, ScreenAnarchy readers now have an opportunity to win Skin Trade on Blu-ray!

Skin Trade is an all out martial arts action film starring Tony Jaa, Dolph Lundgren (who also wrote the film's story), Michael Jai White, Ron Perlman, and Peter Weller, and it definitely delivers in the kicks-to-the-face department.
Our Jim Tudor reviewed the film on it's initial release, and while he was dubious of the overall quality, he did have this to say about the action:

There's jaw-cracking roundhouse action and as many explosions as the film's modest budget could afford. Lundgren, as the driving force in and behind this film, gladly utilizes the violent-justice protocol that Stallone locked down in First Blood, Part II, and later was nudged coldly by Steven Seagal and others, post-Charles Bronson.

While Skin Trade won't be winning any awards, and the acting is a bit clunkier from the bit players than it should be, I have to say I enjoyed it more than Jim. Tony Jaa is starting to hit his stride a bit, and as a person who's always found his acting to be pretty wooden, I'm glad to see him showing a bit of charisma as he finds his footing internationally. Lundgren is also very solid, but then again, he's one of the most underrated action performers of the last 35 years, so that should be no surprise.
If you are interested in winning one of the two Skin Trade Blu-rays we're giving away, simply send an e-mail to josh [at] ScreenAnarchy [dot] net and tell me your name, U.S. address, and favorite Lundgren or Jaa film. Get your response to me by November 2nd and you're good to go!
Good luck!
Tweet Post Submit

Do you feel this content is inappropriate or infringes upon your rights? Click here to report it, or see our DMCA policy.
dolph lundgrengiveawaymagnet releasingskin tradetony jaa