Fantastic Fest 2015 Review: DEMON, When Ghosts Refuse To Be Silenced 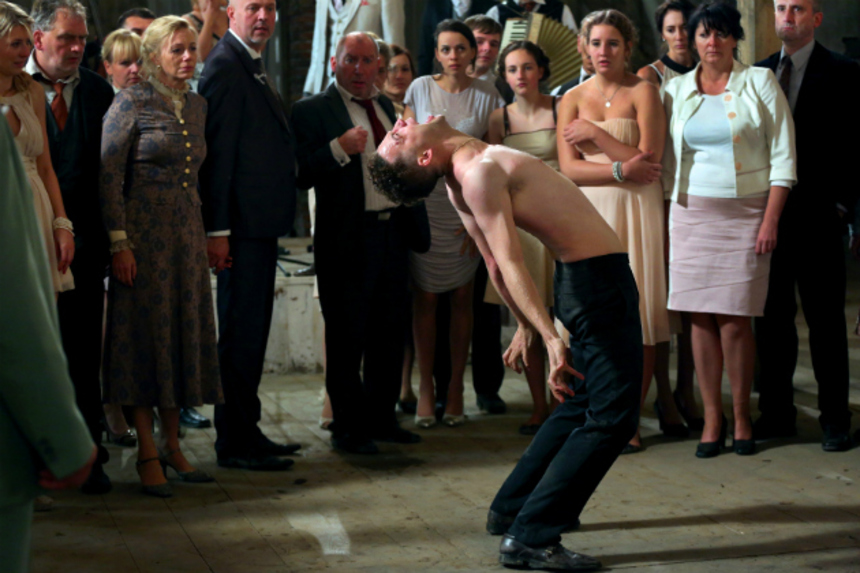 Anything you try to bury will come back to haunt you. And as many times as you bury it, it will come back, and no doubt hurt those you least want to see hurt. The past can never be escaped, and its denial will only force you to deal with it over and over.
Such seems to be the moral of Marcin Wrona's haunting and surreal Demon, a strange ghost story set at an even stranger wedding. Mixing absurdist family comedy with the most terrifying of imagery, this is a family gathering that shakes the viewer to the core.

Peter (Itay Tiran) has arrived from the UK to marry his Polish fiance Zaneta (Agnieska Zulewska). Zaneta's father has given them the old family homestead as a wedding gift. When Peter is clearing some trees, he discovers buried bones. Instead of asking anyone about it, he covers them up again. At the wedding the following day, Peter becomes progressively stranger; at first nervous, then ill, then slowly he seems to be taken over by a dybbuk, a ghost from Jewish lore, and as the family try to figure out what to do, it seems some know more about the bones than they're willing to divulge.

Certainly, Wrona takes no time in establishing that this area of Poland already has issues with haunting, or at least with strange and deadly happenings. Peter arrives on the scene to the recovery of a body, and visits his future father-in-law at his quarry, arguably indicative of a mass grave. The homestead and its surroundings are in a not particularly attractive wooded area, and the house and other buildings far less than glamorous.
There is little colour here, especially as would be expected at a wedding, and Wrona and cinematographer Pawel Flis filter a sepia tone over the canvas, giving the look of an old, faded photograph. Are we in a different time? Are we looking at this from the future? Is everyone here dead, and it's all just a farcical, meaningless ritual to, once again, try to keep the past buried?

As the guests get progressively drunker, Peter is progressively overtaken by the dybbuk. Tiran is mesmerizing as he shows Peter at first distracted, then happy, then nervous, then fighting the losing battle against the creature inside him. His body moves like a strange liquid, adapting to the ghost's feminine presence with pain and precision, and Tiran never lets his character fall into cliché in its portrayal of the ghost in a new shell.
While Zaneta tries to save Peter, she is out-manned by her unrepentant father, who refuses Peter's claims that there is a skeleton on the property, and her brothers, who try to turn her against Peter. Meanwhile, no one is allowed to leave, and expositional scenes are intercut with strange montages of absurd dancing and eating, creepy children's games, and the continuing nightmare of the ghost who refuses to leave.

All of this is offset by a discord between the music score and the film's visual identity. It might seem at first that the score overwhelms, being far heavier than the images would require. But that score is the voice of the ghost, or perhaps it is many ghosts, struggling to be heard as they are ignored by the wedding guests. Peter's Judaism is shown briefly at the Polish Catholic wedding ceremony, but is never overtly mentioned; the ghost being of Jewish mythological origin suggests the film as a metaphor for Poland's attempt at burial of its role in the Holocaust. The father-in-law will not believe Peter's assertions about the bones, but will go to extremes to hide Peter's transformation; as long as the past is unseen, it can be ignored.

The ambiguous ending leaves more questions than it answers, as if the entire wedding was a rain-soaked nightmare that none will remember, and might leave some of the audience frustrated. But it is precisely this ambiguity that is at the heart of the film: if no one is willing to confront the difficult and possibly murderous past, it will rise to the surface of the earth with regularity, waiting for its turn to be heard.
Wrona sadly passed away a week after the film's world premiere, cutting short what would have been an interesting and likely successful career. Demon is a ghost story of a different colour, eschewing most conventional approaches to the manifestations of and reasons behind hauntings to confront a past that is too often neglected.