Crowdfund This: Keep Brooklyn's Spectacle Theater In The Picture 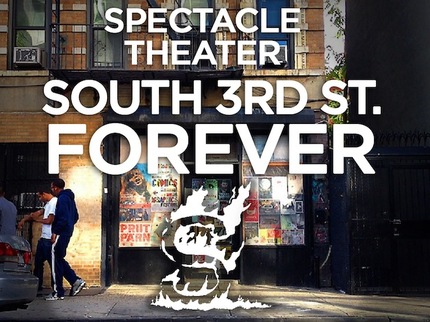 Please note, the author of this article is Christopher Bell, former contributor to The Playlist and director of feature film The Winds That Scatter -- BU

Walking around Brooklyn's biggest punchline of a neighborhood ain't what it used to be. In just a few years, the once trendy art community (or whatever you decided Williamsburg was) has gone full yuppie, adding immense condos and hush-hush J. Crews where once resided rickety music venues. There is, however, one locale that seems to refuse to vacate, something like a remnant of those not-too-distant days: the Spectacle theater.

An intimate, volunteer-run movie house, Spectacle is known for its eclectic programming -- from East German Spaghetti Westerns to Indonesian horror films, any hungry cinephile is bound to stumble upon at least a dozen discoveries in a single week's slate, all for the low-low price of five buckaroos.

Spectacle is a much needed anomaly in the environment of $20 ticket prices and brunch flicks,  so of course earlier this year there was danger of the space losing its lease, likely to house a TCBY under the moniker Wedgies. Thankfully a deal was made, all rejoiced, and the theater will soon be equipped with a Non-Profit status to go with their new ten year lease. At this very moment, the team is running a crowd-funding campaign to help cover certain immediate costs while they put into motion their long-term plan.

To help put the theater in the context of New York movie houses and cinema culture, I asked filmmaker and board member Vanessa McDonnell to help explain why Spectacle is so vital. "In the context of New York theaters, Spectacle is certainly a niche venue for people who want to see rare, thought-provoking films in an intimate space, and the diversity of programming is enormous," she stated. Certainly, these are films that won't be playing elsewhere and absolutely won't be on any of the fifty two streaming websites. Highlights have included They Have Changed Their Faces, a 1970s Italian thriller that Spectacle created an English translation for and gave it its US Premiere -- four and a half decades later. They also held a retrospective of Estonian animator Priit Parn, an artist that has refused to come to New York since 1989. Upon seeing photos of the theater and coordinating with the team, though, he was so impressed that he broke his NY-rule and attended the retrospective in person.

Despite all these great things, it's not just for New York. The team has also branched out to other avenues, spreading their passion throughout the country. "Spectacle also collaborates with others who are doing similar work outside of New York," McDonnell explained. "Over the years Spectacle has collaborated with other microcinemas like The Nightingale in Chicago and Cinefamily in LA, traveling festivals like Eyeworks Festival of Experimental Animation and Basement Media Fest and makers like Everything Is Terrible, several Czechoslovakian animators and many contemporary filmmakers and artists."

Spectacle is a unique little abode -- very different from your normal art house theater. A former bodega, the theater has a ramshackle, DIY charm within it. That said, some of its less-cool elements -- hot in summer/cold in winter, non-soundproof theater -- are going to be taken care of thanks to the Kickstarter funds. "Spectacle has a rough-around-the edges quality that is charming and great except when it's not," said McDonnell. "We want Spectacle to continue in its current model and keep doing what it's been doing but in a sustainable way. We will not be turning the theater into a watered-down simulacrum of its former self though, we promise." Also to be done is an upgrade to both the projector and the sound system. All of these necessary upgrades won't tarnish the theater's m.o. though -- tickets will still be a mere $5.

Spectacle will continue to press on, starting 2016 off with a "Best of Spectacle 2010-2015," a collection of their favorite programming within their five years of existence, and soldiering on with brand new programs in February. You can watch their pitch video below, and find out even more about the theater (and contribute to their campaign!) right here.

Do you feel this content is inappropriate or infringes upon your rights? Click here to report it, or see our DMCA policy.
brooklyn arthousecrowdfund thiscrowdfundingkickstaternyc cinemasspectacle theater