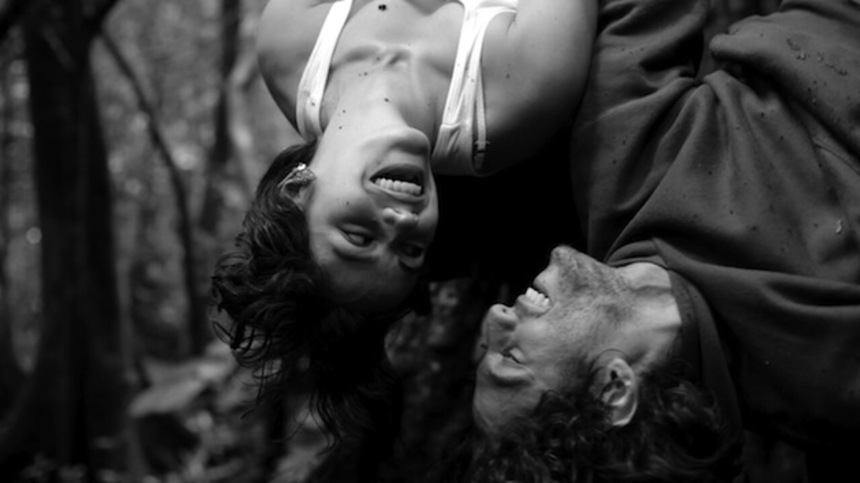 Effortlessly witty and sensual with an easy charm that slowly evolves into a deep reflective wonder of true selves, or perhaps shadow selves,  Viaje charts one of those romantic chance encounters that could either be fleeting or else life-changing. But unlike many of their modern siblings at the cinema Fabrega and her leads Kattia Gonzalez and Fernando Bolaños go beyond that mere notion, and instead offer up the more confounding, perhaps less romantic, and definitely more human notion of "why can't it be both?"

Luciana and Pedro drunkenly meet in the hazy fade-out moments of a costume party where all the guests are either packing up and going home or making one last ditch effort at getting laid. Their first encounter is awkward, sloppy, one that most people would be embarrassed by and surely let alone. But Luciana doesn't, and soon the pair are out into the early morning light, Pedro in his ruffled bear suit, Luciana in her coveralls and rainboots. They hail a cab and proceed to discuss the merits of having a child, but either with two gay men or women, because you could be in a parental partnership but also go out and see people. To their utter astonishment they get a conservative lecture from the cabbie on parenthood and family, which ends in Luciana throwing up. It's a wonderfully funny scene, the actors finding their rhythm with an abandon that marks all the millennial anxieties of growing up and becoming "responsible."

After a morning of fumbling in and around bed, Pedro informs Luciana that he has to head out to work at a research station in one of the national parks, but she should come with him for the weekend: They'll pitch a tent, explore the forest, and she can catch a bus back on Sunday. She agrees and the further journey our simple title hints at begins in earnest.

Like many millennial romances on screen Viaje takes broad cues from Richard Linklater's Before Sunrise. While indubitably smart on its feet, it is less intellectually driven than that film, sculpting a more abstract heart and a philosophy that is not led by the gaze of a young and eager man. This is feminist filmmaking in the truest sense, forming a couple that figure out their needs as best they can together.

Gonzalez and Bolaños in their respective roles as Luciana and Pedro shine with abandon, charting in just a mere 70 minutes what feels like a lifetime of feelings. Their performances are considerate and tender, tousled by a beauty and a sex that is pure and without ego, brimming over with a playful wit that only just masks their fears.

As our pair go deeper into the forest, the film takes on a more abstract and mesmerizing mood. Fabrega and Esteban Chinchilla's black and white cinematography begins in the city static, with most scenes playing out in a single long take. If this all feels like Andrew Bujalski's Funny Ha Ha, it is by the time Luciana and Pedro are caught between vines and swimming in milky mineral springs, anything but; the camera now gently yet exuberantly lets loose, bobbing on the mossy head of a dream-tinted naturalism, reminiscent of works as far flung as Peter Weir's Picnic At Hanging Rock and Hiroshi Teshigahara's Woman In The Dunes. This isn't so much a tonal shift as it is an opening, an unfolding into the vast intimate spaces of the absolute self that can be revealed when enveloped by nature.

In preparing for my trip to Aruba, going over all the festival's programming, I had a feeling about Fabrega's film when I saw a still that showed the lover's two hands from above, touching small plants in the jungle. This one image easily picked up on a thousand and one emotions and like a projector in the dark of a theater my mind lit up at the possibilities. What I did not expect was to fall so boundlessly in love with the film.

Ambitious in its artistry, but of a humble heart, Viaje is exactly the kind of film one wants to find and celebrate on the film festival circuit. With some of the most hypnotic and tender images I've seen at the cinema in 2015, and a coupling that yields raw but not rough emotions, it is the perfect vehicle to deliver its young stars and director clearly and brightly onto the international filmmaking stage. It is there that we then all wait and say in one essential gasp "what's next?" Do you feel this content is inappropriate or infringes upon your rights? Click here to report it, or see our DMCA policy.
aiff2015aruba international film festival 2015costa ricacosta rican filmEsteban ChinchillaFernando BolañosKattia GonzalezPaz Fabregaviaje