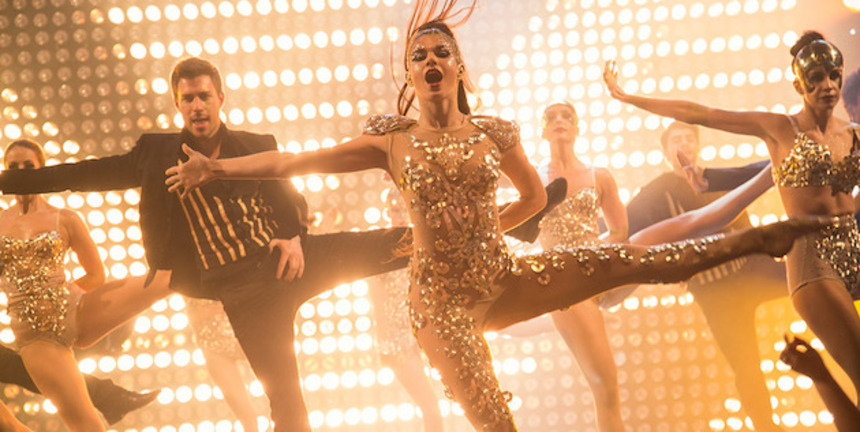 Alex de la Iglesia is a filmmaker who delights at putting mayhem up on the screen, be it clowns with machetes fighting in the Spanish Civil War or the painted living-statues on La Puerta Del Sol knocking off a bank with shotguns. With his latest film, My Big Night, he gets to dissect his penchant for high-energy artifice and at the same time indulge in screwball farce.
Opening with a pop-funk musical number that is as toe-tapping as it is glossy and fake, we are dropped into the midst of a large TV network, furiously shooting its live New Year's spectacular. Only, it is actually October, the audience members are paid extras, and everything is staged. The food and drink are as plastic as the smiles and the laughs. The studio is embroiled in a massive labour protest after recently laying off hundreds of employees, and the street outside threatens to erupt into war. Meanwhile, on the main sound-stage, the show must go on. The special is weeks behind and the non-union staff and players are forbidden to leave the lot until this over-budgeted clusterfuck is complete.
Making fine use of his large stable of regular players, in addition to Spanish musical icon Raphael, who had kind of a spiritual cameo in the climax of Alex de la Iglesia's The Last Circus but here is more central to the story playing a grotesque hybrid of himself and Tom Jones. Several overlapping stories are quickly established and developed over the course of 24 hours.
The two 'power-couple' hosts (Hugo Silva, Carolina Bang) are fighting over their exposure in the script as well as their marriage. The son of the headlining act Alphonso (Raphael), played by Carlos Areces in a blonde buzz cut and moustache, has hired an assassin (Jaime Ordóñez) to speed along his inheritance, but the killer has designs on being a songwriter and is a massive fan. Two conniving women steal the sperm of a Fabio-esque pop-star (Mario Casas) in the hopes of blackmail. (I will not spoil how they, ahem, pull this off.) The camera operators nearly kill an extra during a tricky crane shot, and his schlubby replacement (Pepón Nieto) is forced to bring his senile, cross-bearing mom onto the set, and, oddly, is flirted with by a woman way out of his league (Blanca Suárez). The owner of the network (Santiago Segura) is still working his way through a downsizing list and the two lesbian producer-editors (Carmen Machi and Carmen Ruiz) feel they may get the axe.
With these elements, and unbelievably, several more, in play, de la Iglesia throws all the balls in the air and juggles characters and scenarios with with rat-a-tat dialogue and brash pacing, commensurate to the environment of under the gun television. It is as if the director loved the opening Club Obiwan sequence of Steven Spielberg's Indiana Jones and the Temple of Doom, and decided to reframe it as a feature length satire of Spanish pop entertainment. My Big Night is not particularly deep, but it boogies to the rhythm and has more big laughs than I care to count.
If, after 90 minutes of skillfully sustained chaos in a contained space, the film kind of peters out into the sunlight, unsure of what just happened or where to go, well, that is the kind of artificial TV experience it is trying to mimic. Don't hate the player, hate the game.
Sign-In to Vote
Tweet 0 Submit

Do you feel this content is inappropriate or infringes upon your rights? Click here to report it, or see our DMCA policy.
Alex de la IglesiaRaphaelSpaintiff 2015Toronto 2015

More about My Great Night

Please, please, It's the Spanish civil War not World War II, and it's not "Las Ramblas" in Barcelona but "La Puerta del Sol" in Madrid. I'm dying to see "My Big Night".

Thanks for the corrections!

Our readers are the best! Much appreciated on both catches. Festival blur in is full force...

So I'll go ahead and throw another one: the Spanish singer is Raphael, not Rapheal ;)

I love that they bring Raphael back around after his cameo in The Last Circus.

In many ways, I think MY BIG NIGHT can be seen as de la Iglesia's tribute to '60s Blake Edwards pics. By the time the bubbles come out in the last act, the film is practically channelling THE PARTY (in a great way).