Toronto 2015 Review: EYE IN THE SKY, A Complex And Darkly Funny Look At The War On Terror 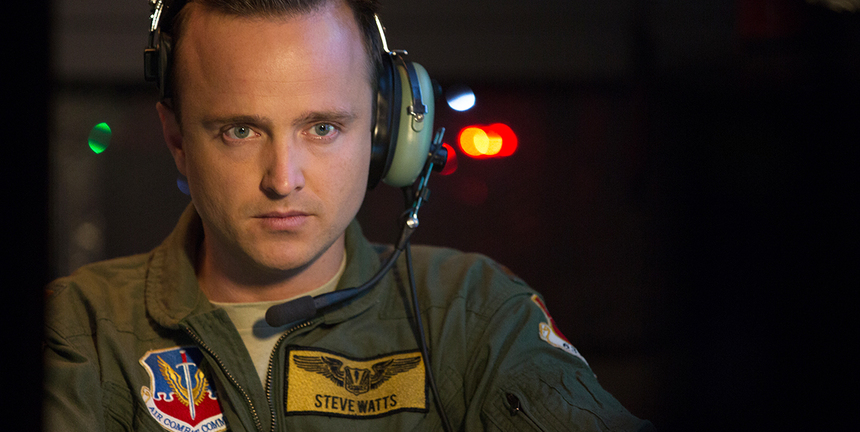 Tsotsi and Rendition director Gavin Hood has set himself a difficult task on multiple levels with his latest effort, Eye In The Sky. He is, first of all, tackling fabulously thorny and morally complex material as he weighs the question of how much collateral damage is acceptable in the war on terror, and who gets to decide?
And with his story aiming to present the full range of players involved in an operation - everyone from heads of state to on the ground local operatives, to generals, to the remote drone flight operator actually tasked with pulling the trigger - Hood is not only taking on an enormous moral challenge but also a fantastically difficult narrative challenge. How, after all, do you build a visually interesting and engaging piece of cinema that basically consists of different people sitting down in different rooms in different parts of the world, talking to one another while staring at computer screens?

That Hood nearly succeeds in the tasks he's set himself is a testament to both his skills and those of writer Guy Hibbert, though the film is significantly hampered by a seeming failure amongst all involved to decide on what exactly it was meant to be at the outset. Is Eye In The Sky meant to play as a thriller? Is it a blackly comic satire? Is it a morality play? It could be any of these things individually, but by trying to be all of them, it ultimately fully satisfies the demands of none.

Helen Mirren plays Katherine Powell, a British colonel who has spent six years tracking a British national who converted to radical Islam years previously and has since been orchestrating a series of bombings for terrorist group Al Shabab.  After years of failure, Powell's target is in her grasp and a joint military operation is under way to secure the target's capture. Above Powell is her commanding general, played by Alan Rickman, secured away in Parliament with a live feed of proceedings so that key figures in government can observe the operation. Beneath her are the local military operatives on the ground in Kenya, while beside her are supporting American forces, notably drone pilot Steve Watts (Aaron Paul) operating remotely from an air base in Nevada.

What starts as a capture mission rapidly transforms, however, when the target leaves the planed arrest zone before intelligence officers are able to confirm her ID conclusively, heading deep into an Al Shabab controlled district where a direct military strike would lead to an utter bloodbath and where the Allied forces quickly realize they have three of the region's most wanted under one roof as they prep a pair of new recruits with suicide vests. The choice is obvious: Act now with a remote drone strike or do nothing but observe as a pair of preventable suicide bombings are carried out. The problem? Civilian collateral damage, most prominently in the shape of a young girl seated just outside the terrorist compound selling bread to the locals.

The great strength of Eye In The Sky is that it does not shy away from difficult questions. This is a complex issue with many opinions at odds with one another, all of which appear to be of value. If Hood has a criticism, it's for the mass refusal to take responsibility for making a decision - the film is shot through with ultra black humor as layer upon layer of government refuses to make a decision, everyone passing the buck to whomever they can think of as next in line - rather than for the decision itself, and the mid section of the film, with tension steadily rising as the ticking clock winds down, is by far the film's strongest.

But though the strength is clear, so too are the weaknesses. The opening is clumsy, the film struggling to gain momentum as it jumps continuously from person to person, location to location, none of the players ever having any direct interaction with one another beyond a voice on a phone line or a piece of text on a screen. That distance is part of the point, of course, but it makes for lousy cinema until the tension does, finally, reach a critical mass. Also problematic is a nearly naive sentimentality that pervades both the opening act in the saccharine sweet establishment of the little girl and her family, and the closing moments with its montage of powerful people looking sad. Which seems a minor point to gripe about, admittedly, but with a film whose strength is its moral ambiguity, the failure to trust the audience to wrestle through that ambiguity on their own makes one wonder why they even bothered to set about the exercise in the first place, the strongest elements of the film undercut by this curious need to present some sort of emotional resolution to a conflict that remains enormously unresolved.

Anchored by strong performances, Eye In The Sky is a film that almost reaches its goals without ever quite getting there. Between Mirren, Rickman and Paul, there's virtually always someone interesting to watch on screen, and there's certainly plenty to talk about, but it also frequently seems at odds with itself and its own genre, and doesn't trust the audience to reach their own conclusions.
Tweet Post Submit

Do you feel this content is inappropriate or infringes upon your rights? Click here to report it, or see our DMCA policy.
aaron paulalan rickmaneye in the skygavin hoodhelen mirrenreviewtiff 2015