Toronto 2015 Review: COLLECTIVE INVENTION Asks The Right Questions, But Has None Of The Answers 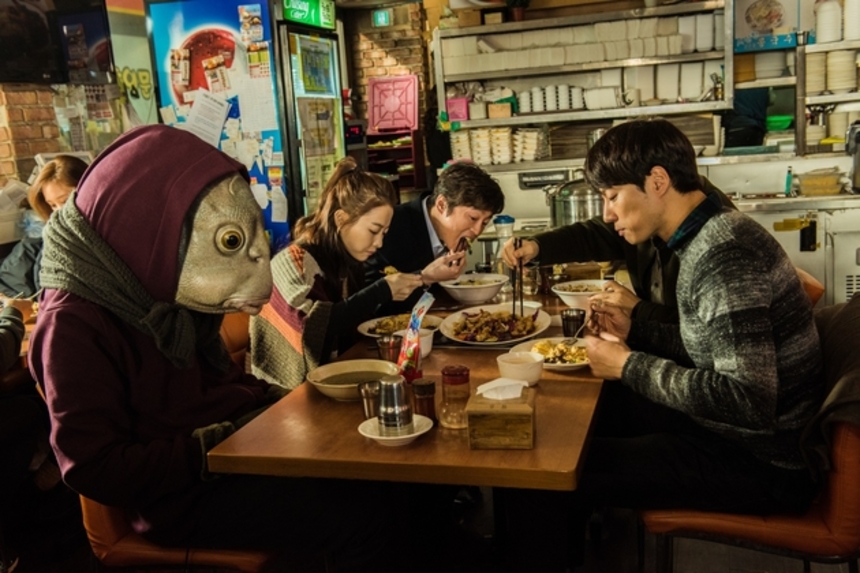 Wrapping a raft of social issues plaguing modern Korean society into a simple allegory, Collective Invention, a quirky new comedy-drama with dashes of the same humor found in Bong Joon-ho's work, is a succinct but relatively straightforward affair. The setting is ripe for social commentary, but none of the observations rise above the superficial and ultimately the film is let down by a storyline that feels underdeveloped and ends on a wishy-washy note of false hope.

Lee Kwang-soo, one of the players in last year's excellent drama-thriller Confession, plays a young man with a strange condition. After signing up for clinical pharmaceutical trials, things go wrong, and he begins to turn into a fish. Mind you, it's less a slow transformation than the image of a tall actor wearing an oversized fish-head mask, from under which we almost never see Lee. He becomes a media sensation for his condition but when public interest wanes and people start to turn against him, only a young reporter and a former one-night lover are still trying to help, though their intentions are also not entirely benevolent.

Following a stint as an assistant director on indie sports comedy The King of Jogku and writing duties on Safe, the Palme d'or for Short Film winner at Cannes in 2013, Kwon Oh-kwang steps up for his first feature directorial outing. He acquits himself well at the helm, delivering a film that is confidently paced, easy to follow and well designed, but what might have done with more prep work is his script, which starts with all the right questions but never threatens to go anywhere particularly interesting.

The main problem with Collective Invention is that it feels like something we've seen too many times before. Akin to a small-scale version of Bong Joon-ho's The Host (2006), without any of that film's technical pizazz or knockout performances, Kwon's film is well-meaning but more than a little derivative. In many ways a youth film, Collective Invention foregrounds the reticence of its characters, a reflection of a society where young people are generally encouraged to toe the line, but when this shyness percolates up the filmmaking as well, the resulting tale feels thinly constructed, a taste of something better than may be lying in wait, but unsatisfying as a starter.

A Werewolf Boy (2012) star Park Bo-young once again plays a girl trying to help a mutated young boy, only this time she is afforded more definition as a girl with plenty of her own problems and a gigantic chip on her shoulder. For his part, Lee doesn't get to do much more than mope around under his costume (which is at least partly computer generated), leaving much of the heavy lifting to the older veterans in the cast, particularly Jang Gwang as the man's surly father and Lee Byoung-joon as the conflicted scientist whose research led to this situation in the first place.