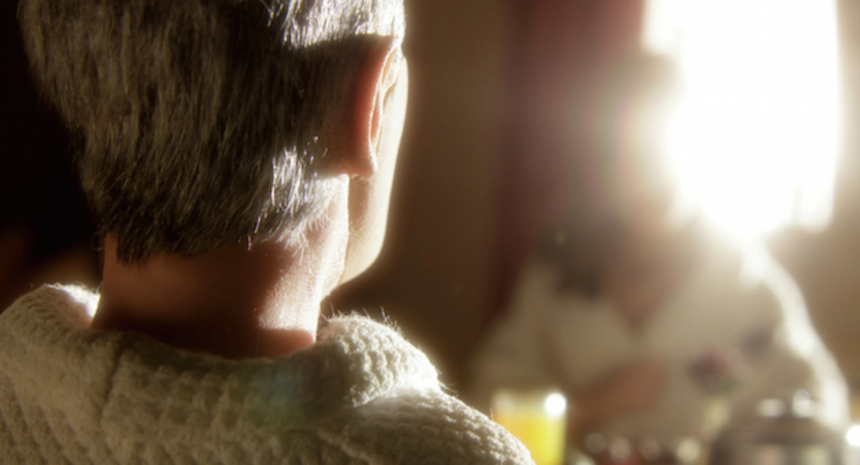 When the philosopher says, "Hell is other people," he perhaps means that in trying to figure ourselves out, we are beholden to our reflections and interactions with other people. Or maybe he is talking about the modern customer service experience.
In what is undoubtedly a high-water mark in animated cinema, Anomalisa is an utterly adult portrait of middle-age loneliness. Anonymous hotel rooms and the myriad awkward social contracts we perform daily with strangers become the grist for intimate, whisper-quiet apocalyptic storytelling. Charlie Kaufman is one of the few 'auteur screenwriters' working in the United States today, and much like his previous work, the idea of 'the self' is intelligently deconstructed by way of bittersweet cinematic creativity.
Absent are the science fiction notions (Being John Malkovich,  Eternal Sunshine of the Spotless Mind) and the weird scale (Synecdoche, NY) of his previous work, Anomalisa's most unconventional aspect that it is stop-motion animated instead of live action.
The team of animators working for co-director Duke Johnson deliver, on a Kickstarter budget, a film that looks as wonderful as anything from Laika Studios (Coraline, The Box Trolls) while, literally, leaving in the seams on the faces of the puppets untouched. Usually, these are digitally erased in post, but here they are thematically relevant, and left in. The miracle of artifice is miracle enough, and in one of those artistic contradictions, probably enhances the honestly of it.
The story is a beguilingly delicate, often savagely funny man-meets-lady tale that takes place mainly in the most impersonal hotel of the most boring city in North America. Cincinnati: Try the local chili, visit the zoo, slit your wrists. Perhaps the town is not truly that bad, but we get it from the weary perspective of Michael Stone, a married, middle aged man visiting for a couple of days to give a lecture based on his how-to book on customer service.
Stone is wearily voiced by the sublimely versatile actor David Thewlis, perhaps best known to cinema lovers as the young, angry street philosopher Johnnie in Mike Leigh's Naked. The lonely man he plays here here is the straight laced, sold-out, compromised 180 degree inversion Johnnie. Both are still lost souls, though. Thewlis can convey 'drowning in his own murk' better than pretty much ever actor working today, and here he does it only with his voice.
After a pleasant flight, and the cab ride from hell, Stone checks into a hotel with the dilemma to either call his wife (and son) or attempt to hook up with an ex girlfriend, whose break-up letter he still has on his person. Before any phone calls are made, we are left to bask in the detailed blank slate of the modern hotel room. The movie is set in 2005, when the story was written and mounted as a stage play for Carter Burwell's "Theatre For The New Ear" series. The music director, most known for his work with the Coen Brothers, kindly reciprocates by doing the music for the film. It is also a time when one can easily get a smoking room in an expensive hotel.
Stone lights a cigarette to summon bravery to make either call. We realize at about this time that everyone in Stone's head has the voice of Tom Noonan. The cabbie, the bellhop, his wife, his son, his ex-girlfriend. The romance, as it were, kicks off when Stone meets a couple of ladies in the hotel bar. Coincidentally they are attending his seminar, and a little hero worship is good for his ego. The more wallflower and self-conscious of the two, Lisa, does not sound like Tom Noonan, the first unique (and feminine) voice Stone has heard, presumably in some time.
The interaction, seduction, and lets face it, rather authentic sex -- for a puppet show -- forms the heart of the film. Lisa is sweetly voiced by Jennifer Jason Leigh, and her uncomfortable, but eager desire to break down her own fears and inhibitions, in parallel with her lover, brings the rarest of warm smiles to this reviewer. Her singing, of all things, a Cyndi Lauper song, is marvelous stuff, equal parts warm and engaging, yet with the complex network of adult issues, melancholy as well. Stone remains in his own existential nightmare -- at one point his puppet-face is nearly torn off, never to be addressed or mentioned again -- as much from having this new connection and the fear of losing it, which for him is almost as bad as having nothing at all. If you want to see someone digging up, displaying and re-burying their raw anxieties, Kaufman is your man.
There are lessons to be learned in Anomalisa, even if sometimes the lesson is that there is no lesson. Customer service is not giving the patron the ego-trip they think they want, but rather a piece of something real, honest and meaningful, that they had no idea even existed. This film is a gift.
Sign-In to Vote
Tweet 0 Submit

Any word on a distribution for this? I'm afraid I won't be able to see it until DVD release sometime next year.

I think Paramount paid a lot of money for this. They are giving it a NYC/LA awards release December 30th, But I wouldn't expect it in most film markets until Jan-Feb 2016. It will be worth the wait though.

I've been wondering the same thing. They paid $5 million for the distribution rights, so I would assume a wide release is planned somewhere down the pipe. But I can't find any proof of that.