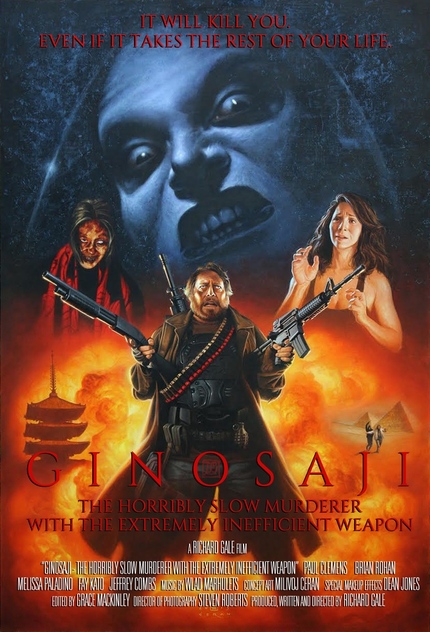 It was a few years back now that writer-director Richard Gale created a legitimate online phenomenon with his short film The Horribly Slow Murderer With The Extremely Inefficient Weapon. The tale of an ordinary man pursued around the world for years by a curse embodied in the form of a white-faced apparition who beats him (over and over and over again) with a spoon, the short film played pretty much every genre film festival around the world before racking up a massive 28 million views on YouTube.

the conceit of the piece, for those unfamiliar, is that the short was presented as a very long trailer for a non-existent movie. And now Gale is actually making that movie.

Titled Ginosaji: The Horribly Slow Murderer With The Extremely Inefficient Weapon, Gale has taken his time developing the feature script and shooting test footage and they're now ready to go. All except for the money bit. And so they're hoping to mobilize some of those 28 million viewers with a Kickstarter campaign to raise the $200k they need to round out their financing.

Want to know what you're in for? Check out the Kickstarter pitch video - which includes a trailer cut from the new test footage Gale has gathered - and the original short below and then visit the campaign page here.

Do you feel this content is inappropriate or infringes upon your rights? Click here to report it, or see our DMCA policy.
crowd fundingginosajihorribly slow murderer with the extremely inefficient weaponkickstarter