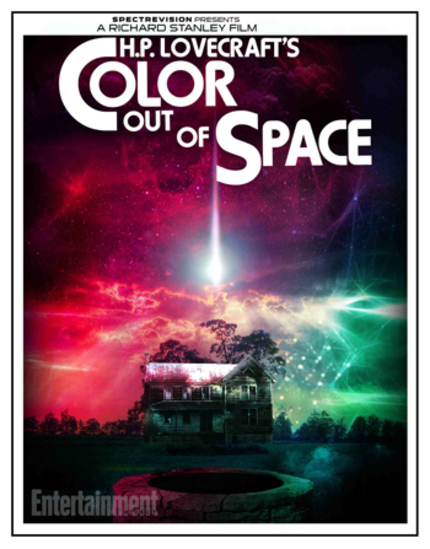 It was a couple Summers ago that we sat in the pitch sessions for the Frontières International Co-Production Market at Fantasia and Richard Stanley (Hardware and The Dust Devil) described his vision for adapting H.P. Lovecraft's Colour Out Of Space to film.
After he played his mood reel we were all the more curious about this proposed project of his but perhaps at the back of our minds we all thought no one would go for it. Fast forward to today and EW is reporting that SpectreVision (Cooties and The Boy) have come on board as producers.

The film is an adaptation of famed "weird" author H.P. Lovecraft's short story, "The Colour Out of Space," about a meteorite that drives people insane. Stanley will direct and pen the screenplay for the project, which he has been working on for several years. "There needs to be a scary Lovecraft movie," Stanley said last year. "I want to make a bad trip film and 'The Colour...' definitely has what it takes to be a very, very bad trip indeed."

"H.P. Lovecraft is the undisputed father of literary horror, and yet, bafflingly, there has yet to be a cinematic treatment that captures the dark beauty of the man's oeuvre," said SpectreVision cofounder Daniel Noah, in a statement. "Richard Stanley's note perfect adaptation of Color Out of Space represents an epiphany for me -- as it no doubt will be for legions of Lovecraft devotees around the world."

Stanley has been working on this script for a while now and will direct the film when it goes into production in early 2016. Casting is underway
1
Sign-In to Vote
Tweet 0 Submit

Do you feel this content is inappropriate or infringes upon your rights? Click here to report it, or see our DMCA policy.
H.P. Lovecraft. SpectrevisionRichard StanleyThe Colour Out of Space

So happy to hear this!

Richard was gracious enough to let me read it when I had worked in development and I was hoping to pass onto my bosses. But like you guys at the pitch, I felt it'd be a hard sell... and I felt really upset with myself for that because the script was so damn engrossing. Excited to see who they get to bring this beautiful, brutal, bizarre story to life!

This is VERY exciting news! Stanley is just the kind of left-field director that Lovecraft needs. I'm gonna have to reread the story this weekend to celebrate.

I hope Stanley gets his semi-regular collaborator Karim Hussain to shoot this film.

Very cool news! 'Colour' is definitely one of my favourite short stories and I think it would translate well to screen in the right hands.

Hussain would undoubtedly be the perfect cinematographer for this project!

Well, I'll be interested to see which approach it takes compared to the excellent "Die Farbe" that was featured here a few years back. The German BR of that one was excellent - and the setting change did work very well.

Obviously the real question will be - for a concept like this - how will the "color" actually be presented?