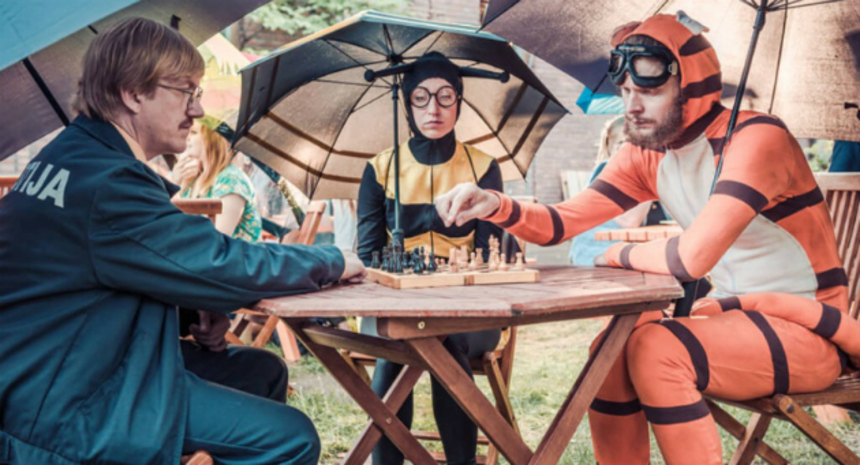 Unfolding in a (slightly) alternate universe where people can turn into zombies after a single drink of alcohol, babies can be possessed by the Devil, and people can fly, Teemu Nikki's feature adaptation of a television series he created with Rikka Takila is a lovable yet odd beast indeed, a romantic comedy that offers neither explanation nor coherence for the bizarre creatures who inhabit its world.

That is the movie's strength and also, to some extent, its limitation. At its core, Lovemilla explores a loving relationship between diner owner Aimo and his girlfriend Milla that has reached a turning point. They live with her alcoholic zombie-parents, who are not bad people at all, except for their poor housekeeping skills and low ambition. Like any young person in her situation, however, Milla thinks she and Aimo should have a place of their own.

Aimo, a gentle, loving soul, goes along with her strongly-expressed idea and finds a rat-hole of an apartment. But he harbors nagging insecurities about his portly appearance and reticent personality, worrying that Milla will throw him over in favor of some handsome hunk. Wanting to prove his love, he foolishly takes the money they'd saved up for their new apartment and acquires robotic body parts for himself. He proudly shows off to Milla, who, being a reasonable and intelligent woman, now believes he's some kind of idiot. A rift opens up between them, growing steadily wider as Aimo takes increasingly desperate measures to heal the fracture.

The story is certainly a common one, familiar especially to inexperienced young men who are often baffled by the conduct of their significant other. Lovemilla is enlivened considerably by its tone and its cast. The former remains wry and observational, while the latter provides consistent, amusing, and distracting light-comic behavior. Sure, the characters are off-beat and unusual, the friends who can fly and the ones who wear costumes and so forth and so on. But, really, they're like the eccentric inhabitants of any small town, who seem perfectly normal until you get to know them.

Depending on the viewer's sense of humor and capacity for enjoying/tolerating oddball behavior, the comedy may grow thin as the plot moves along, but there's no denying the low-budget charms of the Lovemilla universe, even if the jokes sometimes falls flat.

Joel Hirvonen and Milka Suonpää reprise their roles as Aimo and Milla from the series, and their comfortable chemistry makes it easy to sympathize with the troubles they face. Indeed, their everyday appearance stands in good contrast to the kooky people who surround them. It looks like many, if not all, of the supporting actors in the series also made the transition to the film, and the sheer variety of their unique capabilities allows the story to steer away from narrative dead-ends.

Director Teemu Nikki makes the most of every situation, without milking things dry. Neither blazingly original nor amazingly hilarious, Lovemilla is nonetheless a very amusing confection from Finland that wrings plenty of laughs out of its cleverly-constructed scenarios.

Do you feel this content is inappropriate or infringes upon your rights? Click here to report it, or see our DMCA policy.
fantastic fest 2015FinlandJoel HirvonenMilka SuonpääTeemu Nikki