ARMY OF DARKNESS: Shout Factory's Release Will Top All Before It 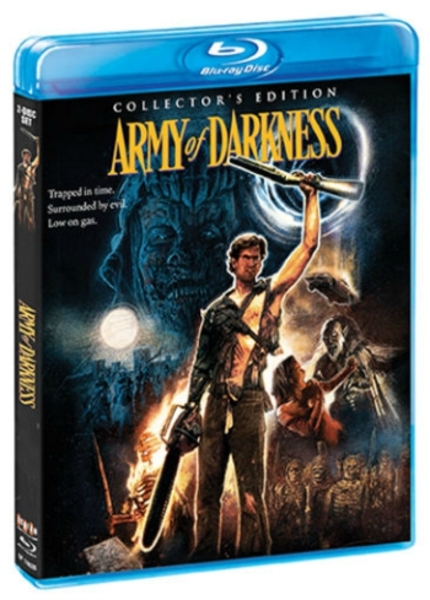 If you, like me, are an avid Evil Dead franchise fan (The Sam Raimi Years) then the number of versions and formats of Army of Darkness you must have in your collection have raised some eyebrows from friends in the past. We understand that you will never, ever, get rid of those tin cases or Book of the Dead, VHSs, DVDs or Blu-rays, Collectors, Special, or Boomstick editions. But Shout Factory may have done the rest of the World a solid and combined every version of the film there ever was and slapped on a tonne of new extras in their upcoming Collector's Edition.

On October 27, 2015, SCREAM FACTORY™ is proud to present ARMY OF DARKNESS Collector's Edition, featuring the Theatrical Cut of the film, the Director's Cut (with 15 minutes of extra footage), the International Cut and the TV version (in standard definition). This definitive collector's edition of ARMY OF DARKNESS is jam-packed with a wealth of bonus content, including new interviews with star and co-producer Bruce Campbell and the cast, special make-up effect artists Howard Berger, Tony Gardner, Robert Kurtzman, and Greg Nicotero, audio commentary, alternate and deleted scenes and much more - all collected in a special 3-Disc Blu-ray set!

Four different version of the same cult classic that we all love? Forget calling it the Collector's Edition. I dub thee the Holy Shit Edition!
Here is everything that you will find on the three discs!

You can pre-order your copy directly from Shout Factory here!
Sign-In to Vote
Tweet 0 Submit

More about Army of Darkness

On my list to buy, I have the DVD version but this looks good to me..
Now some company needs to release Innocent Blood on Blu-ray and also Dead Presidents demands a Blu-ray 4K release, please make it happen..

I already have 9 discs (Blu and DVD) of Army of Darkness in my collection, but what's a few more?

Fantastic, a fellow INNOCENT BLOOD fan! I'd totally accept any decent widescreen DVD. Far as I know, the only version out there is an OOP pan-n-scan keepcase from the early aughts.

I really like INNOCENT BLOOD, and it would definitely be an insta-buy for me if it were released on Blu..