The Army of Darkness has been recently released by Via Vision Entertainment in a deluxe Necronomicon book-styled set. This is my review of the main elements of this set, the presentation, the Blu-ray disc, the DVD and the Director Cut DVD. Not that I need to convince you if you are a die-hard Evil Dead / Ash fan, but read on anyway!

"Shop smart, shop S-Mart!" Ash announces as he serves customers in home wares before his voiceover narration cuts in, recapping the story so far (Evil Dead and Evil Dead II).

What follows is some very cool special effects as Ash finds himself trapped in time, the medieval period to be precise, and it is not long before he delivers a one-liner smorgasbord and it is clear the tongue is firmly in-cheek here. Amidst the sword and sorcery affair there is some over-the-top gore and really crazy situations. The Army of Darkness must surely be in my top 10 punching hags in pits movies.

Other great moments include Ash introducing his 'boomstick' to the peasants, evil manifesting itself inside of Ash... who am I kidding, the whole film is a string of great moments, for a completely foolish but highly entertaining time, look no further!

The Blu-ray disc - hail to the king baby

The disc comes courtesy of Universal Pictures and as a stand-alone Blu-ray release it actually came out some years ago, as evidenced by the advertisement heralding Blu-ray as a new format, which gave me a chuckle, but it is neither here nor there! The disc takes a short time to load but once in the menu it is immediately evident that the upscale was definitely worth it. The colours are lush and bright, the special effects sharp and overly cheesy, enhanced by the clarity of high definition and working in the films favour, and the backgrounds and foregrounds are completely clear.

The presentation - who wants some?

A standard cardboard box houses the rubbery awesomeness that is the Necronomicon, one pissed off looking book and within its pages are awesome key art depicting scenes from the film. Then we come to the discs, three on three pages followed by a page of web links and lastly a personal message from the creator of the Necronomicon prop book - Tom Sullivan.

In term of what is on the discs, other than the feature, on the Blu-ray you also get, U-Control (a Universal proprietary software tool designed to make viewing easier and customised but it is pretty useless), BD-Live (is worse, auto-downloading new trailers and commercials) and a nifty feature.

Creating the Deadites is a brief but extremely passionate look-back with Howard Berger and Greg Nicotero of KNB Efx Group, discussing pre-CGI tricks and much preferring practicality. This is a belief Raimi still preaches today and quite evident even in his modern stuff ala Drag me to Hell. The feature gets quite in-depth and it is great to see the earlier footage, particularly a young Sam Raimi yelling at people. A lot of it was improv, a lot of hard work but the consensus is that it was also rewarding and worthwhile.

The alternate ending is another interesting treat. As learned from the commentary on disc three, this is the intended original ending, but it just did not adhere to the studio cut. Reverting to DVD quality, the scene depicts Ash caving himself in, taking the right amount of a potion to sleep to get back to his time, what happens? Well, you'll have to watch and find out.

Lastly, the theatrical trailer is a lot of fun and basically pitch-perfect as to what the film was about and its tone.

The DVD of the theatrical release - Say hello to the twenty-first century!

Disc 2, is a DVD and although handy to have another medium, the DVD actually contains the exact same content (feature film and extras) as the Blu-ray

Disc 3 however is the Directors Cut DVD. Firstly we have the same theatrical trailer as on disc 1, but the director's cut feature film contains 15 minutes of extra scenes and the intended ending.

However, I say stick with the Blu-ray; the truncated version is breezier and cuts out some unnecessary exposition and dragged-on parts of the big battle.

This disc is fully redeemed and highly recommended however thanks to the commentary track featuring Sam Raimi, Bruce Campbell and Ivan Raimi.

They have a great chemistry, poking fun at one another, stating blunt facts about the filming and telling really dead pan jokes. They also question Universal's decisions, preferring this longer cut to the studio one. They explain the origins of S-Mart, mention that most projectiles and damage done to Bruce on-set was caused directly by Sam throwing them and when Ivan joins them they go in-depth about each scene together, it really is quite fascinating and frequently hilarious.

Finally, the deleted scenes are also worth a watch, preferably with commentary as they discuss the scene, ultimately confirming why it did not work in the film.

So that is pretty much it. Long story short, fans of Evil Dead will and should buy this. The Blu-ray is gorgeous, the box/book is grotesque and it's the most fun horror/fantasy film of all time! 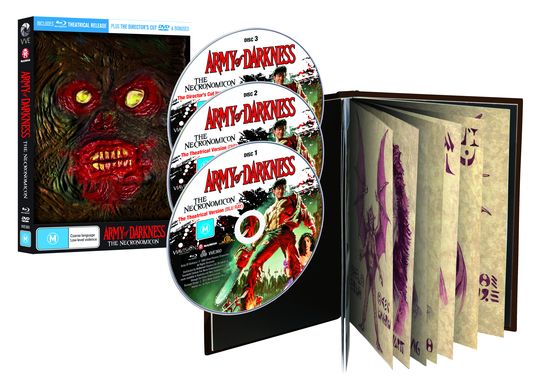 More about Army of Darkness