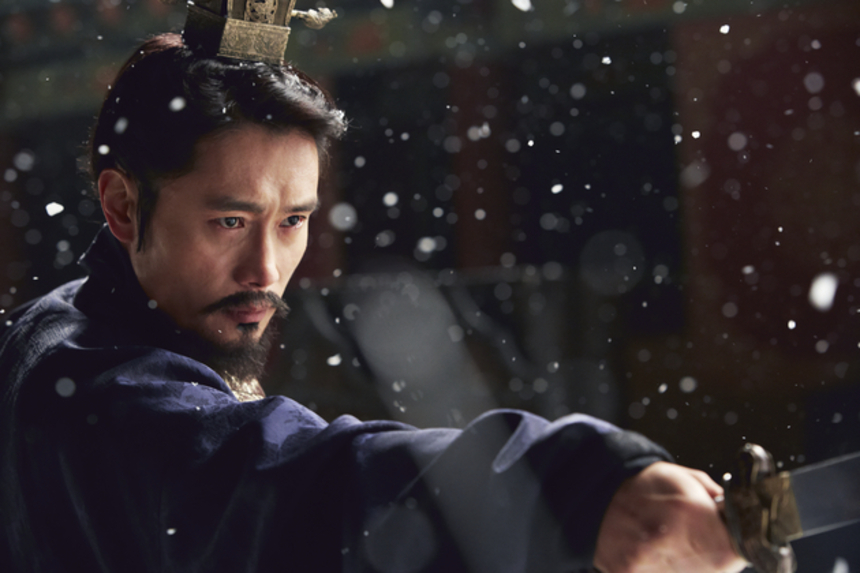 The wild card in the quartet of major Korean releases scheduled for this year's high summer season (alongside Assassination, Veteran and The Beauty Inside), the star-driven period spectacle Memories Of The Sword proves to be a perplexing experience with jarring tone shifts and unclear aims. Not even Lee Byung-hun and Jeon Do-yeon, two of Korea's most dependable stars, can rise above the material, while newcomer Kim Go-eun is an awkward anchor to the film's emotional heft.

Rebels Seol-rang and Yu-baek used to fight side by side, until Yu-baek kills their leader Poong-chun and sides with the throne. Seol-rang escapes with Poong-chun's infant child and, after losing her sight, rears her to become a warrior. 18 years later, the young Hong-hee, who seeks to avenge the death of her parents, accidentally crosses paths with the now all-powerful Yu-baek.

Rather than the grounded and epic action film that was sold in its trailers, the film actually features extensive wirework and a twee sense of humor. This all becomes clear in the opening scene that features a tittering Kim Go-eun gleefully hopping over a 20-foot sunflower. Memories Of The Sword apes a number of swordplay films, paying particular heed to the wuxia classics of its neighbouring China/Hong Kong. Warriors glide up bamboo stalks, albeit far less gracefully than in Ang Lee's Crouching Tiger, Hidden Dragon (2000) and wear (symbolically) monochromatic garments while engaged in the dramatic stand-offs reminiscent of Zhang Yimou's epics Hero (2002) and House Of Flying Daggers (2004). Sadly, the mysticism that complements the fanciful physics of those films is replaced here by trite melodrama.

For a film that aspires for to be grand and heroic, Memories Of The Sword, lacking in broad geography and rarely straying from the relational dynamics of its central trio, feels oddly small and inert. As far as we can tell, during their 18-year absence, Seol-rang and Hong-hee have been near the King's palace the whole time and we spend no time with characters who aren't warriors or within the King's inner circle.

Thus, perhaps a little predictably, the film is overly reliant on the emotional cross sections of its three protagonists, but even their stories aren't given enough definition to stand out. Compounding this issue are the performances, with cast members who feel as though they're acting in completely different films. Given the usually steady hand of Park Heung-sik on the director's reins, a filmmaker known for efficient dramas such as those he previously made with Jeon (I Wish I Had A Wife [2001], My Mother, The Mermaid [2004]), the vapidness on display here is particularly disconcerting.

Of the main cast, it is actually superstar Lee who acquits himself the best, even though he isn't really given much to work with. He's played similar roles, not to mention a king in 2012's Masquerade, and affords an appropriate steeliness to his antagonist. Jeon infuses her trademark tough vulnerability to the film's dramatic points but alas is completely unconvincing as a warrior, though the blame here should be levelled at direction and choreography. Meanwhile, starlet Kim, who impressed many in her debut Eungyo (2012), proves erratic in the central role. Her performance is similar to her previous dud Monster, but thankfully she has shown a vast improvement in this year's Coin Locker Girl, which was shot after Memories Of The Sword.

Beyond wuxia films, Park's epic owes much to Lee Myung-se's Duelist (2005) and Quentin Tarantino's Kill Bill (2003). Though rather than inspiration, Memories Of The Sword almost draws entire set pieces from them, down to production and shot design. Alas, the action on display is poorly choreographed and very busily edited, either cutting incessantly to mask a lack of dynamism or using longer shots that are filled with 300-style speed ramping, in addition to some horizontal panning and very quick and jarring crash zooms.

Memories Of The Sword never really knows what it wants to be and as presented, viewers will have a tough time acclimating to its disjointed style. Given the strong pedigree behind and in front of the camera, it's sad to be left with such a disappointment, as it feels the project was rushed to production (though not to theaters following Lee Byung-hun's very public scandals in Korea), perhaps in order to capitalize on the enormous popularity of period fare that kicked off a few years ago in the country.

Memories of the Sword

More about Memories of the Sword