THE VIRGIN PSYCHICS: Trailer For Yet Another Sono Sion Film 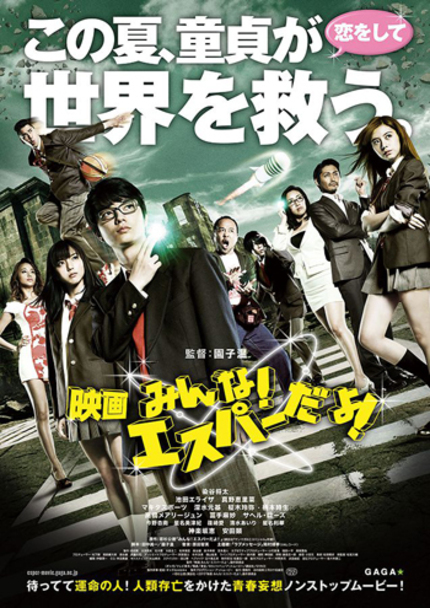 Here is the full trailer for the upcoming film The Virgin Psychics (Eiga Minna! Esper Dayo!), by Sono Sion. The film opens on Japan on September 4th.
Here is what I have been able to find out about the film from the internet in a brief glimpse...

The psychic comedy follows an ordinary (virgin) high school boy named Yoshirō "Yocchan" Kamogawa (Sometani). His life changes overnight when he wakes up with the ability to read other people's minds. Yoshirō is not the only one to gain powers in his town. Terumitsu Nagano (played by Mikata Sports), an (apparently virgin) worker at a café near Yoshirō's school, gains telekinesis -- but he uses it for sex toys. Yōsuke Enomoto (played by Motoki Fukami), a (probably virgin) senior and former basketball player at Yoshirō's high school, gains teleportation -- but only while naked. AnimeNewsNetwork

The film version follows a series of 12 episodes (2013) and a special episode directed by Sion as well, which aired in Japan this past Spring. All of this was of course (because you know, Japan!) adapted from the manga Minna! Esupa Dayo! by Wakasugi Kiminori who also created Detroit Metal City.
Here is what I know from watching the trailer. I am in trouble. There are so many attractive Japanese women in just this 96 seconds alone, how will I survive the full run time? Like the great prophet Mr. Furious once said, "My pants feel like they're shrinking too". I'm looking at poor Yoshirō test the limits of his school uniform in the trailer and all I can think is, man, Japanese garment makers have their work cut out for them.
But all silliness aside this still looks very silly, and funny, and obviously a wee bit perverted. Between now and the release date I have a television series to track down.
Sion simply scoffs at the word "prolific". He just does not quit, does he? He is a filmmaker whose vocabulary must not include the words that will make up the sentence, "Have you considered taking some time off and resting?"
Sign-In to Vote
Tweet 0 Submit

More about All Esper Dayo!

I see gravure idols Anna Konno and Mizuki Hoshina (who looks eerily like my girlfriend) in the trailer (0:39).

Love the sound of this so much.

All I can say is that the people who were offended by Tag are going to have a seizure. A bad one! The trailer won't prepare you for the amount of panty shots and cleavage on offer here because they didn't dare to put 99% of it into the trailer. There are more panties than in Love Exposure and Tag combined.