Review: MISSION IMPOSSIBLE: ROGUE NATION, Back To Basics And All The Better For It 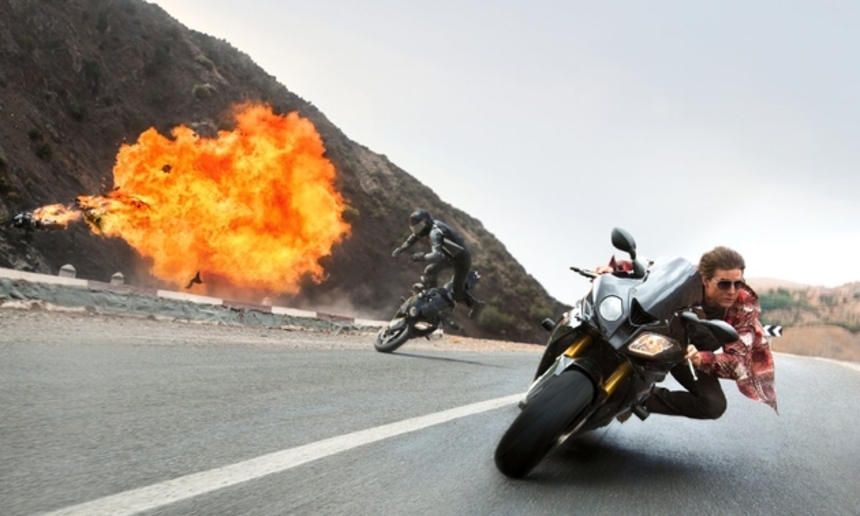 Ethan Hunt and co. are back in a familiar yet thrilling new instalment to the Mission Impossible franchise, which sees IMF's top agent face his most formidable foe yet. Following right on cue from Mad Max: Fury Road, Rogue Nation breathes a modern tempo and some technical pizzazz into old school, tangible thrills, setting itself apart from this summer's wearisome CG-heavy tentpoles.

After going against protocol one too many times, Congress shuts down IMF (again) and Agent Hunt is called in from his current assignment, chasing down an elusive organization known only as the Syndicate. He goes rogue and resurfaces six months later when he summons his sidekick Benji to Vienna. Soon they find themselves chasing former MI6 agent Ilsa to Morocco, as she might be able to lead them to the Syndicate, all the while escaping the CIA chief hellbent on bringing them down.

Jumping straight into the action with a major set piece that most filmmakers wouldn't dare spend until the final act, M:I-5 wastes no time setting up its agent gone rogue narrative and spares us any unnecessary detours. Dispensing with romantic entanglements of the second and third films in the series and the cartoonish fun of the fourth, Christopher McQuarrie stays true to the espionage intrigue that launched the franchise while also keeping the proceedings from feeling old-fashioned.

Iron Man had to wrestle for the spotlight and Max Rockatansky played second fiddle to Imperator Furiosa earlier this season, but this is absolutely the Tom Cruise show through and through. At 53, Cruise still makes for a convincing action lead, indeed, add in last year's Edge of Tomorrow and this middle-aged star is putting a generation of green screen action stars to shame. Over the years, the star has lost his lustre for many but for anyone who still has a soft spot for the grimacing star, that charm that made him in the first place is still there in spades.

Simon Pegg once again provides solid comic relief and Jeremy Renner has grown into his character, though he is no longer an effective 'by-the-book' foil. The gormless Paula Patton is replaced by the radiant euro-chic of Rebecca Ferguson and Alec Baldwin brings his trademark bluster along as the CIA chief. Most importantly, whereas Ghost Protocol lacked a real antagonist, Sean Harris, as the head of the Syndicate, proves a worthy successor to M:I-3's Philip Seymour Hoffman, injecting some tension into the narrative with a calculating madman who is always one step ahead of Hunt.

The Usual Suspects scribe and The Way of the Gun director McQuarrie has become something of a Cruise expert, having already written two of his films (Valkyrie and Edge of Tomorrow) and previously directed him in Jack Reacher. With their fourth collaboration, McQuarrie writes exactly the kind of material that he knows the star will shine in, crafting a modern incarnation of Agent Hunt who is still an alpha male fuelled by quips and winks but not one above getting a helping hand from a woman or being outwitted by an enemy.

It is precisely because Hunt no longer appears infallible that Rogue Nation works so well. Not since the first film have we been guided through events that felt as though they were beyond the character's control, not merely the result of bad luck or hidden antagonists. Placing Hunt out of his element raises the stakes to a level they haven't been for 19 years.

If the film invites so many comparisons to the original it's probably because it's trying very hard to remind us of it. The tuxedos, car bombs and aristocratic European hotspots should be enough of a giveaway but then the 'impossible' heist that occurs midway offer a clear indication of McQuarrie's intention to go back to basics. It's the same game, only bigger, and no clearer is this demonstrated than in a scene that sees Hunt not hold on for dear life on top of a high speed train, but rather on the side of a jet taking off.

Rogue Nation doesn't try to give us anything new but in an era of more is more, its laser-sharp focus, gripping set pieces and its relative lack of objectification (though this is still most definitely a man's world) add up to a refreshing alternative. It would be nice not to have to rely on sequels for our summer thrills, but until then, Rogue Nation, the best Mission Impossible film we could hope for, will do nicely.