Review: IRRATIONAL MAN, Not A Masterpiece; More Like A Blip 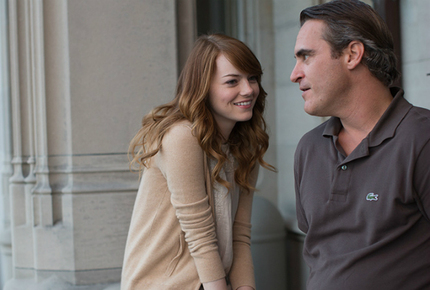 Let's make this perfectly clear : Woody Allen, director, is one of the most unique and prolific talents in the history of cinema.

Every year we get a film on schedule, often a chatty and intellectually rich ensemble piece dealing with one moral quagmire or another, set against an intriguing backdrop. Just who shows up in the latest film is part of the fun, as generations of performers have queued up to work with him.

It's easy, then, to become complacent about his work. Unlike those who toil for years, making the release of their latest film an event, Allen's consistency breeds complacency. We know we're getting another one, we'll suspect it's more of the same, and so there's often a lack of surprise or anticipation at play. What's clear, however, is that some of his efforts are fine, some a bit less than fine, and an astonishing number are masterpieces.

Let's be frank: Irrational Man is no masterpiece.

The film is perhaps more playful than the subject matter would belie. Joaquin Phoenix plays a philosophy professor frustrated with the "bullshit" he flings at his students, concerned about the dialectic between thoughts and actions when it comes to moral imperatives. He has an affair with a married colleague (Parker Posey) and a student (Emma Stone), and in the midst of all this manages to concoct a murder plot under the guise of righting a moral wrong.

As a recovering philosophy major myself, and lifelong fan of Allen's work, this should definitely be in my wheelhouse. However, unlike 2013's Blue Jasmine that got things so very right, this one's more Scoop or Magic in the Moonlight, a trifle of a film, a bit too maudlin and too middling to be taken as anything other than a blip on this remarkable cinematic journey Allen has engaged in.

Casting Joaquin as an erudite prof is a compelling one, and there's a sense of his displacement and ennui that works well, but unlike his Doc character in Inherent Vice that you could almost believe in the '60s would have made it through medical school, it's hard to see how this hapless individual could dance school-to-school and still manage to snag a (relatively lucrative) gig. Sure, it's churlish to judge the film on the preposterous shitshow that is the life of a humanities academic, but one has to at least buy briefly that the man spouting Heidegger and Kant on screen has actually read these works, and I wasn't entirely convinced.

Nor was I convinced, unfortunately, by the other two leads. Parker Posey is usually a thrill, but here I felt her constrained by her character, never really injecting the electricity or charm that she often brings to the screen. Emma Stone too felt both out of step as an undergrad, too fickle with her emotions, creating little chemistry with Phoenix.

It ends up feeling a bit contrived and stagey, which is a shame because there's some decent stuff at play here. It's a film that plays to a (relatively) startling conclusion, and the final moments of the film are perhaps its most memorable. Still, along the way we never really get the sense that this is anything other than a protracted thought experiment, and an incomplete one at that. You can see the wheels turning in the performances, feel the lines of dialogue that are meant to noodge the viewer into getting the point. It's heavy handed stuff, and that's a rarity for Allen.

I found myself drifting mid-film, wondering about how the professor would be grading these papers in the midst of the crisis, seeing how this student would handle a poor grade on a paper from a man she's sleeping with. The film goes out of its way to make her convince a reluctant him ("no means no" be damned), but even then it feels like there's little benefit, even carnal, from the relationship between teacher and protégé.

So while there's not much to applaud the film for, it's still very much in keeping with a long line of works, and one can delight in picking out references and allusions to other films in the Allen oeuvre. I'm happy to have a protagonist who's a philosopher, and pleased to be treated with a modicum of intelligence as the characters work out the vagaries of their decision making. It's not irrational to have hoped for more from Irrational Man, perhaps, but it's still disappointing to see that this is what we get from this fine group of talent.

Review originally published during the Cannes Film Festival in May 2015. The film opens in select theaters in the U.S. on Friday, July 17.