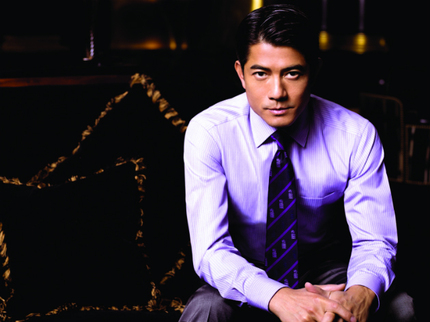 Arguably the most versatile of Hong Kong entertainment's legendary Four Heavenly Kings, for more than 30 years Aaron Kwok has dominated the world of music and dance, and along the way became an award-winning actor.  Kwok chatted with me before receiving the Star Asia award from the New York Asian Film Festival, which screened his newest crime drama, Port of Call, and his 2012 hit, Cold War.


The Lady Miz Diva:  Congratulations on receiving the Star Asia award.  Does it surprise you how many international or non-Asian fans you have?

Aaron Kwok:  Actually, I don't know, I just concentrate on trying to do a good movie.  It's my job, it's my work.  It's very important to me.  I like art, especially films.  I like acting, I love acting.  I'm deeply passionate about wanting to be a good actor. {Laughs}

LMD:  Please describe your character in PORT OF CALL. How did you see his motivation? Why is he was so friendly to the young man in the story despite the terrible things he did?

AK:  I think the character, he is a traditional kind of good guy, a very, very good policeman.  But on the other hand, maybe he is a little bit selfish; the selfishness is he wants to clarify not only why someone killed a woman, but why, what made him kill the woman?  It's not only the motivation, it's also why he became a murderer?  He wants to know his background; when he grew up, if something happened to make his mind change to make him kill the woman?

So I think a good cop is that kind of person, my character is like that kind of person; he has the same questions when he investigates different types of people. So, I think this is a very interesting character for me, and also the different aspects of the character, the outfit, the look was very important for this character because I play someone who is in his 50s. He's an older cop, so physically and mentally it's not like a young man. So I had to use a lot of imagination about how to play him.

It was very important that we had a full script before we shot. Sometimes in movies, they change the style or the script while they're shooting, and on this film, I did want that, because when you do it like that, you can spoil the flow of the original script. If you change, I think it's very difficult to go back because some scenes were already done and if you change it, you can mess it up.

LMD:  In PORT OF CALL, I would think having the set script would be very important as the timeline jumps back and forth throughout the movie.  When you're playing a character we see in the present day, then we see him 10 or more years ago, do you keep in mind the differences in the years as you are inhabiting this person?

AK:  Yeah, yeah, yeah.  You have to be very detailed about what you're shooting, very focused.  No matter what part you're shooting, whether it jumps to another scene or another 10 years, I have to be very clear about what I did before no matter where it jumps, because the emotions follow the story. The whole story is through my eyes, seeing the whole thing.  I investigate so many different witnesses; different witnesses give me different information that makes me change my mind, so with every different step, I have to change a little bit of the details.  It develops and develops and develops. It is the challenge of this character, but I love the challenge.
LMD:  Well, another challenge of the PORT OF CALL character is his look, and you mentioned playing this cop who is well into his 50s.  You also have another film coming out soon where you have a lot of makeup...

AK:  Ah, yes, the Monkey King {2}. Yeah, this is hard. It is the hardest in my life. I've never done a movie like that, it was crazy.
LMD:  But did you enjoy it?  A lot of actors I speak with actually enjoy getting under a lot of makeup or having a lot of physical transformation because it's easier to create the character.
AK:  Of course, of course.  For me, it's very important because I'm a singer before, for quite a long time, even right now, I'm a singer. So, if you are singer, your exposure is very strong. Like if there is a video, you can go to the karaoke, or see the music video on TV showing and showing you. You want to make your style memorable: When I'm a dancer, I create a very strong character to put in their {the audience's} minds.
I have to break their minds of that when I'm acting - I'm the character, I'm acting. When you're playing a role in a movie, you need to be very serious to not let that persona jump up. So I need to take more effort for different characters, to change my face, to change my hairstyle, to make myself more skinny, or to make my skin tone darker. Because singing is very close to my real life; I am the real Aaron Kwok, it's very close to me, but in the film, I'm not. I just put down my own Aaron Kwok character and go to the character in the film and put on that face.

LMD:  In 2009, I spoke with screenwriter Ivy Ho (AND I HATE YOU SO, DIVERGENCE) about the future of Cantonese film and she predicted the Canto film would not exist after 20 years.

AK:  {Laughs}
LMD:  As someone so synonymous with Hong Kong entertainment, what do you think of the future of Hong Kong film?

AK:  In my case, I feel there will be more Hong Kong film. In China, they are growing very fast, and most people in China, they want to see movies as their hobby. Before it was only maybe once in a while, but now I feel most of the Chinese people like to watch movies when they go out with friends. I think times have changed and I think lifestyles have changed, it's very important in China.
The Hong Kong market is so small. The population is just over 7 million, but just only in Shanghai, it's like 30 million, and how big is China? So, you can imagine that in Hong Kong, a successful box office brings in maybe 40 million, but in China, 40 million is one day. You cannot compare with the China market.

LMD:  COLD WAR is also featured at the Festival this year and it is very like the classic crime films of the Hong Kong heyday in its style and in Cantonese language.

AK:  I think the directors are very talented {Longman Leung and Sunny Luk}.  One {Leung} is a new up-and-coming director, and one {Luk} has been directing films for 20 years.  They are able to bring a new vision to the audience.  They know how to challenge the audience.  They know the mindset of the audience, that it's very quick.  When you're speaking dialogue, you need to make it new, so that the audience remembers, and they made it very simple, but powerful.
LMD:  You've been in every aspect of entertainment and it's clear you know so much about creativity and vision and the industry, why have you never made a film of your own?

AK:  Yeah, maybe in the future. I read a story two years ago, but I really want a very good script writer, because the story has to be suitable for my movie style.  But I found one right now, because I just finished a movie in Thailand called One Night Only, and I met a very talented, young script writer from Taiwan. That movie is very romantic, and not only a normal story, he was very clever to create a new story. I think in the future, more people will follow this story structure; it looks very simple structurally, but it's not that simple. The movie will be released on the 4th of December.  Before, they wanted to show it on the next Valentine's Day, because it's a love story.
But this Taiwanese script writer, and I think his mind is changed {his thinking is different}; I think he knows how to not only write romance, but they will also put in some action.  In a 1½ hour movie, they will put in different action scenes at very important times, so when the audience goes to the cinema, it is not just only dialogue, they'll see action, which makes the movie great. So the experience of the film goes up and up, it's like a roller coaster. But I will be a director maybe in the future; I still am learning, learning and learning.

LMD:  Since we are here to celebrate your career in film, is there one movie that you feel represents you best?

AK:  {After very long thought} Divergence. That is the first movie that I won the Golden Horse.  I think it was just a very important thing, because for that movie, I absolutely needed to put down my own character, Aaron Kwok, at home. The character in this movie was not my own self.
This interview is cross-posted on my own site, The Diva Review. Please enjoy additional content, including exclusive photos there.
Tweet Post Submit

Do you feel this content is inappropriate or infringes upon your rights? Click here to report it, or see our DMCA policy.
Aaron KwokHong Kong CinemaNYAFF 2015