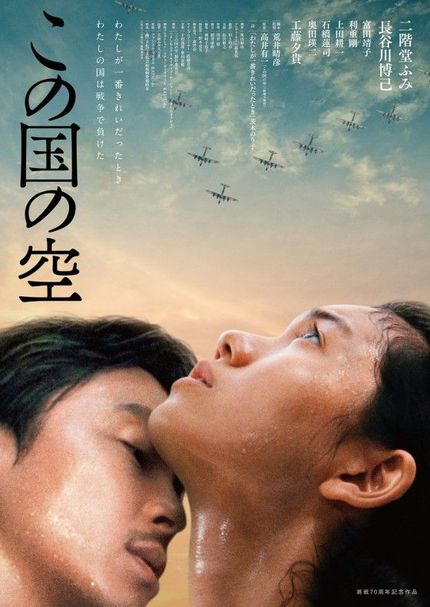 Screenwriter turned director Arai Haruhiko visits Japan Cuts with his life-during-wartime drama, This Country's Sky. Starring Kudoh Youki and festival favorite Nikaido Fumi as a mother and daughter surviving in the last days of World War II, Director Arai, along with producer Morishige Akira spoke with The Lady Miz Diva about this project he'd been hatching for over 30 years.


The Lady Miz Diva:  The film is based on a novel by Takai Yuichi.  What made you want to adapt it to film?

Arai Haruhiko:  It was about 32 years ago, I can't remember if it was published in the magazine, or I encountered it as a paperback, but I really liked the original novel when I read it.  I went to meet the author and I had no plans to adapt into a movie then, but I asked her for the rights and she agreed.

LMD:  In America, we rarely get to see this type of perspective from the civilians who were trying to live normal lives in the middle of the war.  Was that part of the interest in bringing it to the screen?

AH:  Yes, that is exactly what I wanted to capture, but I assumed that was one of the reasons why it was never adapted into a film.  It was so difficult to get it made because it depicts only the every day.  To explain it a little further, in Japan, the treatment of the common, everyday scene, is seen as too common, so it's hard to get investors to be interested in making such a film.

LMD:  Details like the taping of the windows, the bomb shelters, taking a bath once a week and even seeing Satoko dressed in modern clothes with slacks were interesting to me.  Did you do any research beyond into the daily lives of women survivors beyond what might've appeared in the novel?

AH:  Yes, I tried to read as many diaries of people that lived in the era as I could get my hands on; but even on set, I was so anxious that I was reflecting it as accurately as possible, because it was something that happened before I was born.

LMD:  Please talk about that scene by the river, where Satoko's mother is saying she knows what's brewing between Satoko and Ichige.  That in normal times, she would have prohibited an affair even by force, but during the desperation, she not only would permit it, but look to Ichige to keep Satoko safe.  Is this an example of the practicality of women in this life of death situation?  Were the previous standards forever changed after the war?

AH:  I guess in post-war, thanks to the United States, Japan became much more liberated in their thinking, but before the war, I think they had a much more strict moral and ethical standard.  I think it is very much a reflection of the time on the mother that she says that ordinarily she would frown upon Satoko having a relationship with someone that has a wife and kid, but in that scene, the mother assumes that they will die in a B-29 air raid, so death is a presupposition.  But the mother is very conflicted because she doesn't want her daughter to die without knowing a man, so I think she's speaking as a woman, rather than as a mother. It's 40/60; she's supporting the relationship, but she's against it.

LMD:  This is a very intimate look at the lives and inner workings of women, whether it's Satoko's yearning for Ichige, her close relationship with her mother, and also the sibling rivalry that exists between the mother and aunt, even at their age.  As a man, where did you find the perspective to portray that so sensitively and realistically?

AH:  Well, ever since I was young, women treated me horribly, so I've been researching for a long time.  There's a genre called Nikkatsu Roman Porno, as you may know, that has a lot of nude scenes with women, and generally the protagonists are female.  I had penned so many screenplays for that genre; as long as I made women into protagonists and included some nudity, I was pretty much free to do as I pleased in those films, so a lot of people said my depiction of women was very good.  But according to the women that I've had close relationships with, such as my wife and my daughter, I don't understand women at all.

LMD:  At the end, Satoko says her war was just beginning.  What did that mean?  I was anxious to find out what happened after the wife came home? Did you always intend to stop before that point?

AH:  It was my intention that I didn't want to depict what happened August 15th.  I did not want to portray it as if the war actually ended for Japan with the radio broadcast by the Emperor announcing it, because I do not think the war really ended at that time.

The reason why I say that is, of course, specifically speaking, I could have depicted how Ichige's wife and children come back and Satoko sees them across the hedge; how he has his family back and they might even move away.  So her "muddy war" actually begins at that time.

I have a real problem with Japanese people being depicted as feeling so joyous that the war ended and they have no consideration or opportunity to think about why the war started in the first place.  So, of course they feel that the Constitution was forced upon them by MacArthur; Abe is changing it now and so forth, but I really wanted to contemplate whether in the 70 years since the post-war, have we been confronting it as accurately and seriously as possible?

LMD:  Perfect segue: The timing of the film is very interesting, because World War II has become a contentious subject politically in Japan.  Many filmmakers I've spoken with at Japan Cuts have expressed unhappiness at the increasingly right wing swing of the government and the idea of rebuilding the military.  You've made this story that does not deal with politics directly, but shows the effects of war on the innocent citizens.  Was that purposeful?

AH:  So, it's the opposite, actually.  People say that I might've calculated the timing of the release, but it was because it was the 70th year since the war that people were more supportive of making this film.  Remember, I've been wanting to do this project since 30 years ago, but no one took me seriously; but because it was the 70th anniversary of the end of the war that I was given the opportunity.

And in that time since the war, we have Prime Minister Abe, who is trying to turn Japan so that we are able to go to war again, but I think we're changing in that direction because of the United States.  Japan is, after all, considered the 51st state of America.  I don't think this film is a very typical antiwar film.  I've tried the very standard antiwar film, and it's been always critically panned.  I can't get audiences to watch it, so I guess I tried to change my approach.

Morishige Akira:  As a producer, I've been doing a lot of different smaller projects, and I've always known that Director Arai was interested in making this adaptation, but the opportunity didn't quite arise.  In terms of the timing, it was ideal that it was the 70th anniversary; the financing worked out because of that.  But who knew that we would be releasing at a time like this, with Prime Minister Abe?  Had we known, I'm sure the film would've been much more incendiary. {Laughs}

AH:  A Woman and War, nobody came to see that film!  Between writing and directing, I prefer the one that I get the most praise.

LMD:  As a screenwriter, does it make you more careful about script?  Do you allow your actors to contribute or interpret freely?

AH:  Of course, fundamentally speaking, I would like to follow the screenplay, but of course there are pluses and minuses to add and subtract from this, because the screenplay is just words written on a page, and that becomes the movement of the actors on the set.  So, of course I can't always adhere to the screenplay.

But with that said, when another director tampers with my screenplays, I don't care if it's Director Hiroki, I will have words with them.

MA:  I worked with Director Hiroki on Kabukicho Love Hotel.

LMD:  With regard to the movement of the actors, what aspects to their characters did Kudoh Youki and Nikaido Fumi contribute that perhaps you didn't see before?

AH:  There were no instances where they contributed anything. {Laughs} I think Nikaido studied the screenplay quite a lot, so she brought with her what she studied and researched on set, but I would judge what she deemed correct and what she deemed wrong, so I had the final say in that.  For instance, the scene where she rolls around on tatami when she comes back from Ichige's house, just small gestures that I directed.

In regard to Miss Kudoh, in that scene where they're at the river, she did ask me, "What was the mother's feeling when she's advising her daughter about her relationship?"  And I did say that she's feeling both for and against it.  That was a very long scene, but it only took two takes and that was the only time I applauded.

LMD:  Was Satoko's spoken piece at the end, part of the novel?  Why did you include that over the credits?  I'm curious if that poem has anything to do with her decision to continue with Ichige even though he's cowardly, morbid, selfish and a cheater?

She didn't have any options but to choose Ichige.  Besides him, there were only older people around.  All the younger men were drafted into war.  So he's around 38, so he was just the only candidate that she had.  Had she not been in the war, I don't she would have gone for him.

LMD:  What would you like Japan Cuts audiences to take away from THIS COUNTRY'S SKY?

AH:  I'm not sure, because even with the Japanese audiences, I sometimes get feedback saying, 'Oh, they had so much food to eat during war," or, "They're being very lax."  So the feedback is quite unexpected.

MA:  After 1945, Japan has managed to avoid war since then, thanks to MacArthur and since the Constitution.  But with this film, I think it's important for both Japanese people and American people to realise what the conditions were when Japan was under the war.  So if the American audience can take some sort of interest in that, I would be very happy.

Do you feel this content is inappropriate or infringes upon your rights? Click here to report it, or see our DMCA policy.
Arai HaruhikoJapan Cuts 2015Kudoh YoukiMorishige AkiraNikaido FumiThis Country's SkyWorld War II

More about This Country's Sky