Martin Kudlac
Contributor; Slovakia (@martykudlac)
Tweet Post Submit
Rapidly growing and from year to year enforcing its status as Romania's biggest film gathering, the Transylvania Film Festival, has successfully wrapped its 14th edition. Held in the second most populous city after Bucharest, Cluj-Napoca, the festival expanded into a cinematic event of major magnitude with large body of programming and directly contributing to cultivation, support and development of domestic industry with plethora of initiatives.
This year´s edition boasted 223 films from 60 countries in 20 separate sections. The panorama of recent cinematic gems from world cinema, Supernova, screened Andersson´s latest, Golden Lion awarded, bleak existential comedy A Pigeon Sat on a Branch Reflecting on Existence, along Serbian harsh coming-of-age drama No One´s Child, Slovakian award-festooned unusual road docudrama on aging boxer returning to the ring to provide for family Koza, last year´s celebrated Czech drama about the struggle to reverse the unflattering fate because of racial prejudices The Way Out or Ukrainian miracle film, The Tribe.
Miroslav Slaboshpitsky, the director of The Tribe, proved that words are indeed unnecessary in film medium, a fact that was contemplated in special section Word Are Very Unnecessary with an array of inventive and inspiring films among which was last year´s Karlovy Vary big winner, the contemplative minimalistic drama The Corn Island, Rotterdam-premiered dark comedy with touches of absurd, Parabellum. Plucked also from Rotterdam, Ruined Heart - Another Love Story Between a Criminal & a Whore by the pioneer of digital cinema seconds the absence of words. Khavn de la Cruz proved to be a visual treat hypnotically lensed by master of camera, Christopher Doyle. Labeled as "punk noir opera by Khavn", the director picked the cues from a formula in the film´s title to create a dreamy cinematic poem sticking to his trademark poetics.
The competition section aimed at debuts and sophomore features presented "intimate films and those productions that resort, in an intelligent and surprising manner, to the conventions of genre cinema" as the artistic director Mihai Chirilov described the competing titles, "there are films with only two or three characters, films whose story rarely leaves the four walls of a room, films whose tense action scenes are more efficient than any Hollywood blockbuster" he adds. At 13th edition, the festival honored the 80s icon Debra Winger and this year´s Special Award for the Contribution to the World Cinema was handed to 70s sex symbol, Nastassja Kinski.
For selected reviews, scroll through our gallery below. 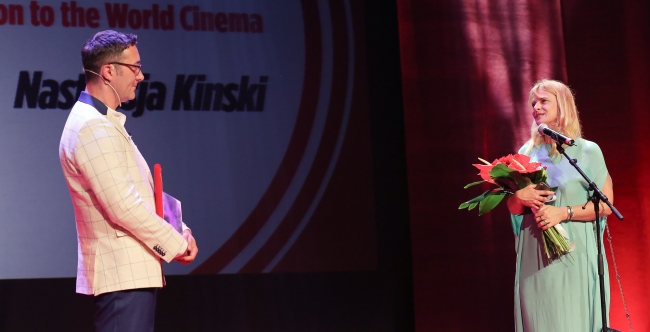 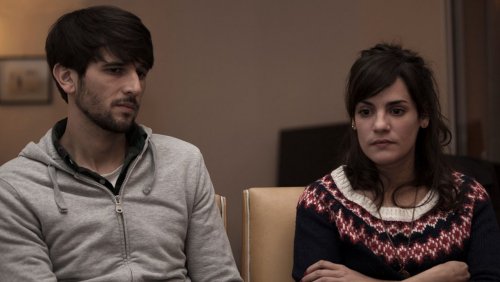 The Fire (dir. Juan Schnitman) The Winner of Transylvania Trophy

Juan Schnitman's debut The Fire is an example movie of this year´s artistic conception of the main competition. A simple exposition, young couple preparing to buy an apartment turns into dramatic conflict as dubiousness starts to erode the foundations of their relationship. Marcelo (Juan Barberini) and Lucia (Pilar Gamboa) wake up in their messy apartment full of boxes on the day of buying new apartment. After a trip to a bank, they are returning home with hundred-dollars bills stacked under clothes trying to look unobtrusively what only leads to awkward looking-behavior. Lucia experiences a minor break down after the pair learns about postponement of their real estate transaction and from that moment on other doubts emerge throwing the relationship into intensive and temperament turmoil questing its continuation. Schnitman delivers a small and intense drama crossing beyond will-they or won´t they formula portraying a complex and difficult psychological picture, not the ordinary battle of sexes, enhanced by tremendous performance of both protagonist. Even though the majority of the film takes place between four walls and the two leads the fiery nature doesn´t wane and the director ups the ante by unexpected twists as Lucia unprovoked emotional striptease, a hypnotizing monologue or in a raw sex scene underlining the difficulty of the relationship to be amended. While The Fire stems from the stale formula of preventing the break-up, Schnitman delivers thrilling psychological portrait. 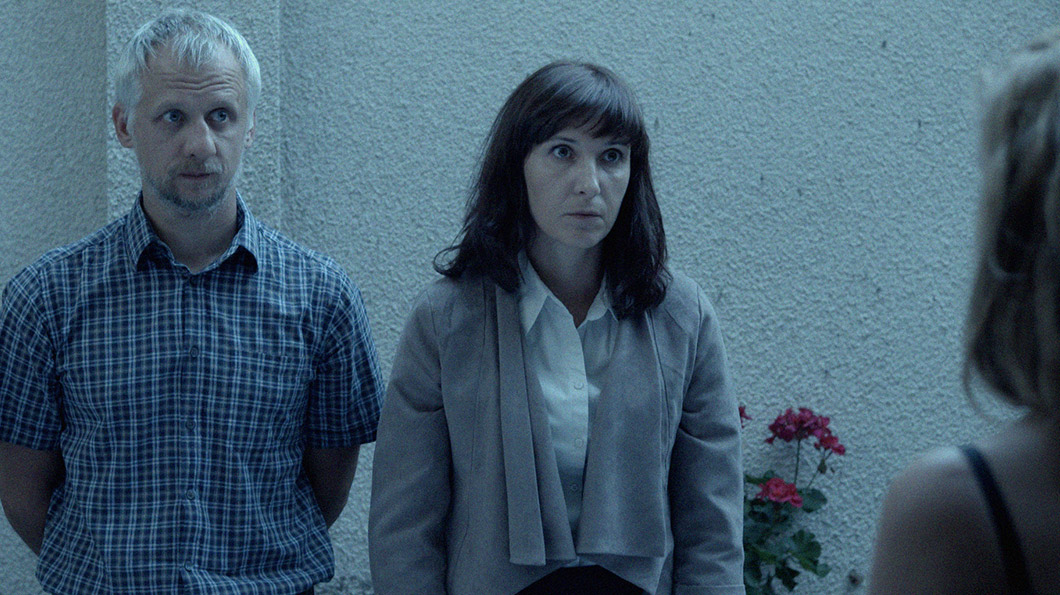 In Kristina Grozeva & Peter Valchanov´s The Lesson, schoolteacher Nadezhda (Margita Gosheva) discovers that there is a thief in her class and decides to not let this petty offense go unpunished. Unfortunately, as soon as she returns home, she finds a creditor ready to seize her family's house because of unpaid debt. Nadezhda has three days to find a large amount of money to save the house. The downward spiral that this young teacher faces, knocks down the door of her own moral and ethial system forcing her to trespass boundaries she would normally not dare to cross, while struggling to maintain a personal integrity and honor. Even though the main ingredients are quite familiar, The Lesson is not the usual social drama. Grozeva and Valchanov use plot components as the time ticks down the high stakes, lending to the dead-end situation for what could be called their poverty thriller. What distinguishes The Lesson from similarly themed dramas is the fact that Grozeva and Valchanov are not afraid to throw some genre spice, even self-parodying elements, into the boiling social drama pot. 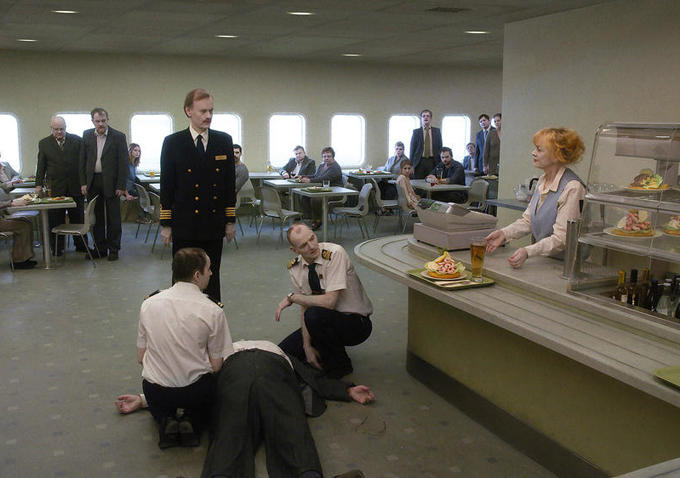 His latest addition, under the ridiculous English title A Pigeon Sat on a Branch Reflecting on Existence, doesn't differ from the fragmented narrative form Andersson established in his prior two features, consisting of unrelated and semi-related vignettes. A strand revolving around a dire pair of novelty-item sellers, whose names could be Vladimir and Estragon but were actually christened with the less-referential Sam (Nisse Westblom) and Jonathan (Holger Andersson), meanders through the Calvary of quotidian miseries.

The duo introduces itself as working in an entertainment business, followed by a dry proclamation expressing a lame desire to entertain people. It's an odd gesture from somebody encompassed by an aura of despair, even odder as the said entertainment business means selling fake vampire fangs. It seems that the sorrowful pair of ill-fitted sellers -- Jonathan is always complaining about being mistreated by his business partner -- ventures on a offbeat crusade to bring joy back into people´s life, an element extracted from Andersson's cinematic world that is usually found only in a dream, as in a charming musical piece featuring newlyweds on a moving train in You, the Living. Yet here the crusade finds itself on a road to perdition. 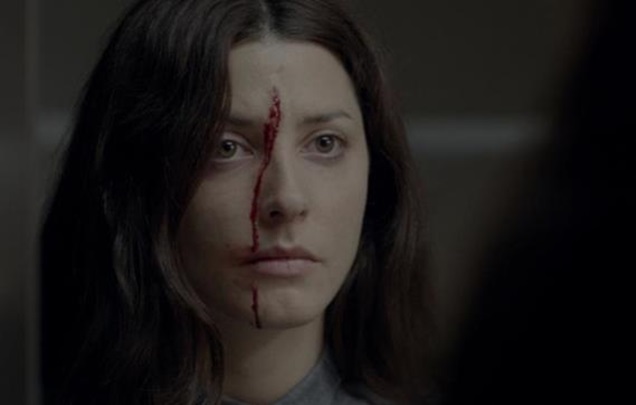 Carlos Vermut´s sophomore feature is an odd tragicomic triptych. World, Devil and Flesh are the tittles of episodes dissolved one into another and the source of unhappiness of the three protagonists. Vermut uses elliptical narration hiding some motives to render situations more weird or funny as in the case of the first third where Luis enables his twelve year old daughter to smoke and drink, only to succumb to her further whimsical demands. Luis goes on to sell a part of his extensive library just to buy his daughter a ridiculously expensive costume from a Japanese anime. Then he has two problems, total shortage of money and a daughter dying of leukemia. In an unexpected, though a bit forced twist of fate he ends up in the bed of Barbara. Barbara doesn´t lack money and Luis doesn´t hesitate to blackmail her. Barbara has two problems, she just cheated on her caring husband and she is mentally disturbed. The third character is an ex-con and retired teacher Damián who tries to help Barbara but has own dark history. The three of them get caught up in a vicious circle of deception. Magical Girl treads the usual ground of a social critique where everybody has a dark side and gets himself draw into bizarre turmoil. 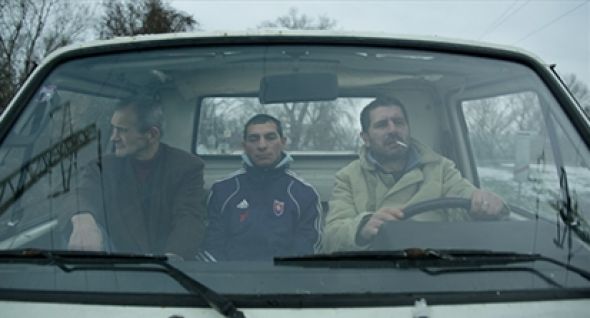 Ivan Ostrochovský is the Slovak documentarian standing behind the award-winning Velvet Terrorists. Here he ventures into feature narrative territory with a minimalistic docu-drama on a god-forsaken boxer struggling to make ends meet. It is inspired by the real life Slovak-Roma featherweight boxer Peter Baláž, who appears as a fictional version of himself in the film.

Peter collects metal scraps for a few euros and relives the star moment of his career from the 1996 Olympic Games in Atlanta via a worn out VHS tape. Peter lives with his partner Miša in a derelict housing estate on the outskirts of society. Miša soon finds out she is pregnant and urges Peter to find some money for an abortion. Peter goes to do what he knows best.

Ostrochovský uses a fixed camera and long takes in the utmost form of observational realism to capture Peter´s downward spiral of reentering the ring while trying to raise money to be able to raise a kid of his own. Unlike a more traditional sports drama, the director focuses on the protagonist pre- and post-match situations, sketching a bleak psychological portrait. 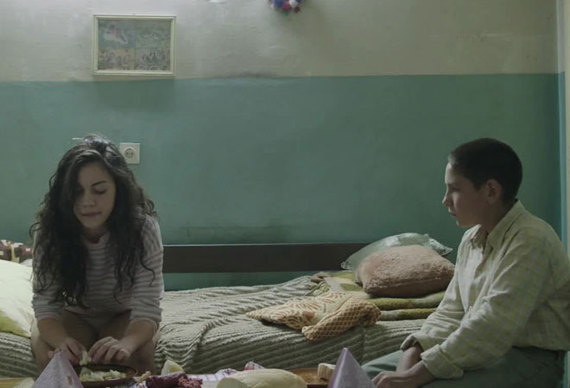 Serbian director Vuk Ršumović's debut is similar to Modris, in that it addresses the theme of a dysfunctional family and the social implication of left behind kids in a Serbian orphanage.

Ršumović uses an actual account about a feral child found in Bosnia and Herzegovina as the launchpad for de-romanticized the Tarzan story. Mapping the transition from animality to civilisation by taming the urges and leading the abandoned wild child into the realm of language, Ršumović echoes the need for social structure. The sidestory of the wild child´s friend, rebelling kid Zika neglected by his father, emphasizes the need. The director also tackles the universal theme of one´s identity and personality.

The Way Out (dir. Petr Václav)

Petr Václav, the Czech filmmaker living and working in France, returned to the theme of racial discrimination that he had already treated in his feature debut Marian (1996). The prejudice based on race persists as a hot topic in the Czech Republic, and attracted even more attention as the government rests idle. The Slovak film My Dog Killer addressed the affair partly. Václav focuses on one decent Roma family struggling to make ends meet. Václav plunges amidst the Roma community in docudrama fashion.

A somewhat Cinderella story emerged from The Way Out's success as the director cast non-actors, and specifically Klaudia Dudová, the main protagonist, a 26-year-old shop clerk, who went from behind the counter to before the camera and then to stroll La Croisette for the film´s premiere at Cannes. To sprinkle more fairy-tale dust in the fate of this young Roma mother, Dudová won Best Actress awards at both Czech Film Critics´ Awards and Lions, a first for a Roma woman.

The Way Out is an unbiased and humane look at common problems within the Roma community, such as youth pregnancy, lack of education, even abuse by Roma moneylenders or pimps. Despite its anchoring in an ostracized ethnic minority and strong social and moral commentary, Petr Václav touches somewhat universal human themes of the daily struggle against all odds to find a modest place in life and in the world. 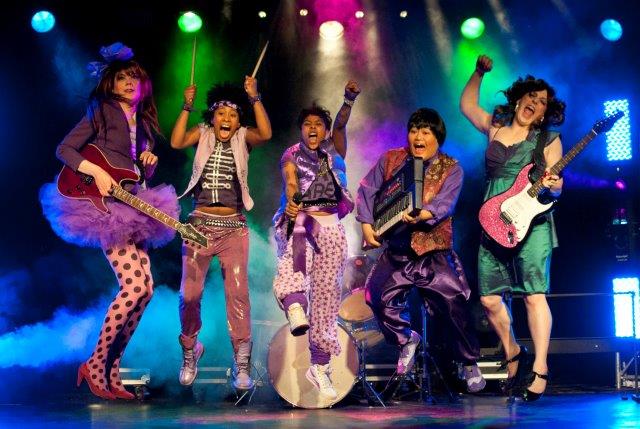 A couple of bullied (and evidently not so popular) girls form a lesbian music band, the eponymous Dyke Hard, with a bully as the lead singer. After the initial stir around their first single hit "Payback" settles down and wears off, and the last venue boos them off the stage, the band´s inevitable demise appears on the horizon. The aggressive and abusive lead singer Riff (Lina Kurttila), who dons an anachronistic glamour costume throughout the film, jumps the sinking boat, as she has little or no respect for her band-mates, considering them merely chain and ball to her wondrous solo career. To add insult to injury, somebody torches the band´s caravan overnight while their manager renounces them. A spark of hope arises in an impending "The Battle of Bands" competition, where Dyke Hard aspires to restart their vanishing fame. 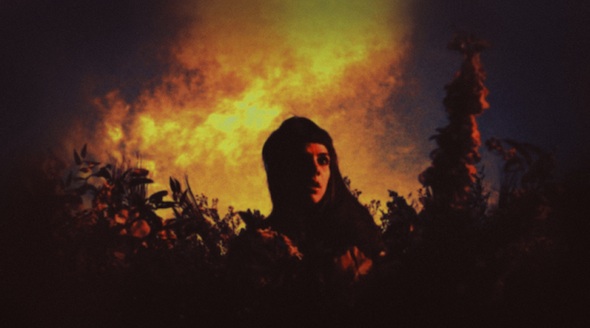