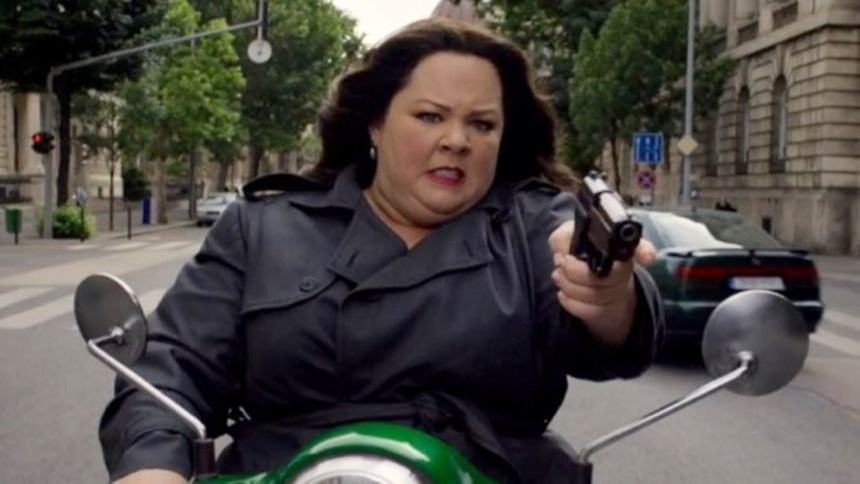 Melissa McCarthy and Paul Feig team up once again for a wickedly funny send-up of the James Bond series with charm and wit in ample supply. Jude Law and Jason Statham add to the fun as, respectively, a suave, painfully vain secret agent and a humorless action stud, while a series of colorful European backdrops help Spy stake an early claim to being the summer's best comedy.

Susan Cooper (McCarthy) is an overly accommodating and homely CIA analyst responsible for guiding super agent Bradley Fine (Law), for whom she harbors an enormous crush, safely through his missions. Routinely put down by her colleagues, Cooper steps up to the plate when a mission goes horribly wrong and she volunteers to go undercover in Europe to stop a nuclear weapons deal. Though underestimated at every turn, Agent Cooper, awakening her long-dormant but more than proficient field skills, proves to be a formidable asset.

As a knowing genre send up, it's fitting that Spy should be so concerned with appearances. The characters are better-looking and deadlier versions of stereotypes we've seen a million times before, but they're also horribly insecure. Then there's Agent Cooper, the overweight and socially inappropriate desk jockey, who puts everyone to shame as the only person who doesn't let vanity get in the way of finishing the job.

Of course, that's also the main source of the film's effortless humor. Forced to don disguises as cat-loving, midwestern housewives and their unflattering ilk, Cooper must constantly prove herself, and while she falls down time and again, she always gets to her feet and finds another way, with often hilarious results.

Following her breakout role in Bridesmaids (2011), her first film with Feig, McCarthy has brought her aggressively ribald humor to each of her subsequent roles, cementing herself as a top comic talent with massive commercial appeal. But she's outdone herself with her latest effort, not only scoring laughs but nailing a two-sided performance that sees her transition seamlessly from frumpy office loner to jet-setting international woman of mystery. As the latter she is lusted after by Italian spies and saves the day (not to mention her veteran colleagues) on more than one occasion.

There's no denying that McCarthy is the star of the show, but she's surrounded with game co-stars each of whom relish their over-the-top characters. Jude Law is all devilish smiles and air-headedness as the most narcissistic secret agent you've ever laid eyes on, while Jason Statham hilariously apes his macho screen persona, even managing to out-testosterone his already outrageously hard-as-nails villain from Furious 7, that hit screens just a few weeks ago.

However, the boys are merely an afterthought in a film where the girls do most of the heavy lifting. Allison Janney brings her biting sarcasm to her CIA boss and Rose Byrne is a hoot as the haughty villainess, but it is Miranda Hart who really stands out from the supporting cast. British comic and star of the exceptionally awkward BBC series Miranda, Hart is hysterical as Agent Cooper's faltering friend and surprising sidekick.

Directing from his own script, Feig demonstrates a strong affinity for genre cinema that avoids turning Spy into a simple gag-filled spoof. The film is sharply put together and expertly paced, while also doing a fine job of balancing its fish-out-of-water insecurities, espionage intrigue and coarse comedy. The film works on many levels, which is a testament to its director's steady guidance.

A delightful comedy with action stakes to rival its progenitor, Spy is a perfect vehicle for Melissa McCarthy and a perspicacious genre hybrid that bodes well for the pair's next project, the upcoming Ghostbusters reboot.

The film is now playing wide in Asia, Australia, New Zealand, and parts of Europe and South America. It opens in North American theaters on Friday, June 5.