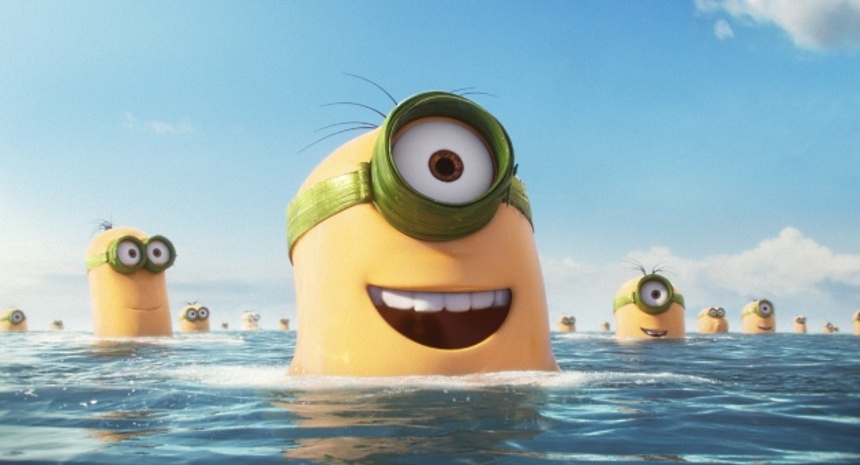 (Nevertheless it will make.... MILLIONS!)

In the increasingly vast catalog of computer-generated animated feature films, the two Despicable Me films aren't exactly considered to be top tier. Weak in story and painfully sentimental, what watchability they have is completely owned by clever visual gags. Well, that, and the minions, the title character Gru's huge army of little clumsy yellow helpers.

For some reason, minions are just inherently funny. Their sped-up movements, squeaky voices, and (cu-)cumbersome indestructible physique just scream "slapstick". Seeing them have fun is addictive, and seeing them screw up is hilarious. It's that easy.
Case in point: last week I took my eldest son (he's 11) to Jurassic World. When the Minions trailer was shown in front of that film, it got the whole crowd in stitches, most of them adults.

Pathé, the largest distributor in the Netherlands, has christened this weekend "Minion weekend", with large-scale avant-premiere showings of the film in its largest venues. I was there Saturday morning, and based on the strength of that trailer, so was my whole family.
And, credit where credit is due, we did have fun. Because the minions are funny.

A good thing that is too, as the film itself has almost nothing else going for it. When people keep mentioning how great the opening credits are, it may point to the rest of the film being not-so-great. The start is easily the best part, showing how the minions evolved, what their primary drive is, and how they have successfully outlived every single evil boss they've worked for.

It's when the story kicks in that things start to sag. Taking place before the minions met Despicable Me's Gru, the pill-shaped army has been stuck in a polar cave for a century. The minions are surviving and safe, but apathetically wasting away due to the lack of an evil boss to serve. Three intrepid individuals take it upon themselves to venture into the outside world to procure a new boss for the clan, and the remainder of the Minions film shows their adventures.

Getting these clumsy guys to their goals proves a task almost too difficult for the scriptwriters. The plot gets ever more convoluted, the jokes ever more lazy, hinging mostly on country stereotypes. Some of the best gags have zilch to do with either the story or the minions, come out of nowhere and lead to nothing. It makes you wish the writers would have had the balls to completely ditch any story whatsoever, and just make their own version of History of the World, Part One. As it is, Minions can't hold a candle to, say, a film like Penguins of Madagascar, another spin-off property which bests it at every level.

But still, all this is inconsequential. Because the minions are funny. People were massively shelling out extra for minion-style 3D goggles (only five times as expensive as the regular ones), and even the kids running around with those look funny already. At this point, the franchise is printing money. Am I asking for too much when I ask for better paper and ink though?

(Minions is currently showing in several public pre-premieres worldwide, and will start its general US run on July 10th.)