Review: INSIDE OUT, Filled With Emotions 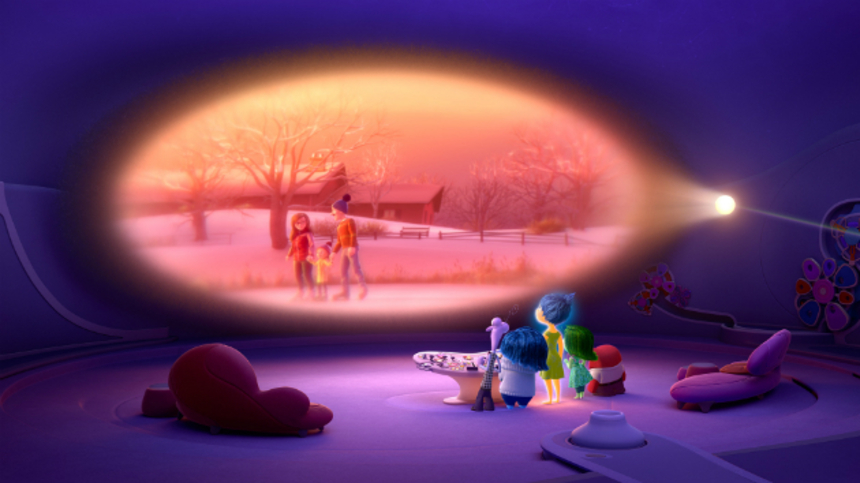 It's no small coincidence that as Pixar enters its cinematic adolescence, it showcases a film that deals with the challenges of growing up.

After changing the world of animation with Toy Story, they made a meteoric rise, crafting some of the most memorable and celebrated films of all time, each seemingly more original and fresh than the previous. A decade after Disney's reignition with The Little Mermaid, which made each of their animation projects hotly anticipated after years of being relatively ignored, Pixar took up their mantle, and it seemed they could do no wrong.

Of late, however, things have looked a bit bleaker. Arguments can be made for some of their sequels (Toy Story 2 and Toy Story 3), but not others (Cars 2, Monsters University). It's been a while since the likes of Up lifted audiences with wonder and surprise, and other studios (including Disney Animation) caught up with smart and challenging computer animated films that made the latest from Pixar feel even less of a special event.

And so when they announced Inside Out, a high-concept film about the emotions of a young girl, I admit to a certain degree of trepidation. I appreciated the desire for reaching for something new, of course, but this sounded like a high-concept stretch, something new that might end up more a pandering to young kids rather than the well rounded tales that their classics proved to be.

About a month ago I had the chance to screen about an hour of the film, and I enjoyed what I saw but wasn't blown away. Yes, the imagery is quite beautiful, and the designers once again have a field day here, using the structures of the brain to create a kind of wonderland made up of dancing synapses and the wrinkled gyri and sulci shapes. It felt sweet and funny, but slight, with some of the characters becoming awfully close to being one dimensional.

As a completed film, however, I'm delighted to report that it's a grand success. Inside Out is tremendous, an instant animation classic that's a far cry from being kids' stuff. This is Pixar growing up, and it's all the better for it.

Audiences that are conditioned to these latest works skewing quite young are probably in for a disappointment. Despite being theme-park ready -- oh to visit the Deconstruction ride at Abstract Thought Land! -- I'm betting younger kids will glean little from it other than the pretty colours and funny action. Not that this is a concern aesthetically, of course, but it's clear that the film skews older, mixing in nostalgia for adults and a kind of teaching moment (but not an egregious one) for kids going through those manic phases just prior to pubescence.

Pete Docter and his team mix in a little bit of Jung to a coming-of-age movie, demonstrating in a truly elegant way that it's through a hybridization of our emotions that we gain inner richness, leaving childhood categorical feelings for the more nuanced memories made during adulthood.

Yes, this is heady stuff, which is apt since the film takes place in a young girl's head. The particular emotion at control - Joy, Sadness, Anger, Disgust, Fear - quite literally drives young Riley. After her family moves from Minnesota to San Francisco, her emotions get a jolt and fight to set things right.

Voiced impeccably by Amy Poehler, Bill Hader, Lewis Black, Mindy Kaling and Phyllis Smith, this team helping to shape Riley's personality makes for an almost slapstick ensemble, yet when called for, there's true depth to the performances. Poehler and Smith in particular are exceptional in that they're given the hardest jobs of all: making sure that their requisite roles don't become obnoxious or overwhelming.

The balance of emotions echoes another beloved story, that of Pooh and his friends. Joy is the hapless pooh, and Sadness has quite a bit of Eeyore in her. It's when Joy loses her cool, or Sadness makes an unexpectedly sweet move, that the film finds its true richness.

The emotion characters themselves are rendered with an almost sparkly exterior, as if where they end and their environment begins is constantly shifting. The new, flexible capabilities of the animation tools allow for a Chuck Avery-style distortion, bringing back a hand-drawn sensibility that has been lacking in many of the rigidly modeled CGI films.

From mad clowns to imaginary creatures, the world of Inside Out is filled with delightful visual flourishes, combined with some sparkling dialogue and an attenuated mood. As jumbled as all of these elements are, there's a keen direction to the storyline, born out by the usual process of years-upon-years of breaking things down until they're just right.

In so many ways this feels like a true passion project, a back-to-the-basics work that still feels very much like it's built upon all that's come before. Inside Out is up and above many of its animated brethren, a smart and sweet film that never hesitates to be both wacky and melancholic. For a film that's filled with emotions as characters, it's perfectly in keeping that it's also full of these emotions in the story it tells so well. A little bit of Joy and Sadness can go a long way, it seems, and my Fear of being Angry or Disgusted is most certainly abated by this exceptional work.

Review originally published during the Cannes Film Festival in May 2015. The film opens wide throughout North America on Friday, June 19.