Review: DOPE, Mushy Like A Marshmellow, And All The Better For It 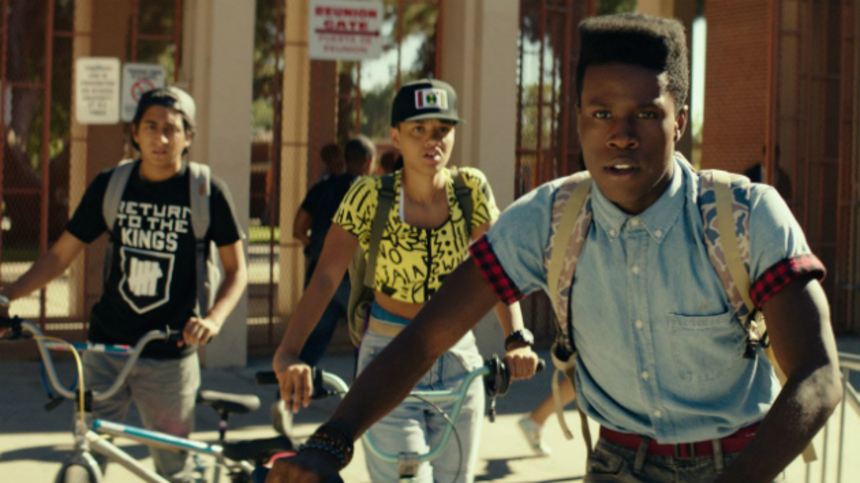 Written and directed by Rick Famuyiwa (The Wood, Brown Sugar), the film sets up its hero Malcolm (Shameik Moore) and his friends Diggy (Kiersey Clemons) and Jib (Tony Revolori, The Grand Budapest Hotel) as geeks. Their general characteristics follow in the footsteps of traditional geeks; they're outsiders at the high school they attend because they're focused on getting good grades and getting into college, and are bullied on a regular basis by big, strong athletic types.

Their nerdy, scholarly focus is attributed to a desire to be white, which keeps them on the outs in the gang-infested African-American neighborhood where they live. (It probably doesn't help that Diggy is an "out" lesbian, though that draws comparatively little attention from the bullies.) But, rather than portraying the trio of friends as doomed victims with little hope of ever escaping their oppressive circumstances, Dope manifests a firmly upbeat attitude: All three are smart enough and sufficiently determined to get out, attend college, and make something of themselves. The real question is: Will they survive?

The casual acceptance of random murders and imprisonments is taken as another fact of life, just one element that sheds light on the perils of surviving in that particular neighborhood. No excuses are made nor judgment pronounced upon those who choose the criminal path, yet neither are those who take the road to legal employment excessively lionized. Everyone has to choose, and be ready to accept the consequences, whether good or bad. Malcolm is a whip-smart, mild-tempered student with Harvard as his goal. One day he crosses paths with local kingpin Dom (A$AP Rocky), who enlists him to pass messages to the alluring Nakia (Zoe Kravitz). Malcolm doesn't really mind, since he's nursed a crush on his fellow classmate for quite a while. She takes a liking to him and encourages him to come along to a party that Dom is throwing that night. A gun-fight breaks out, sending everyone running, but it's not until the next day that Malcolm discovers a large quantity of drugs and cash in his backpack.

The parting gift becomes a web that entraps Malcolm and his friends. They have absolutely no desire to become involved in criminal activity, but they are smart enough to know how difficult it will be to extricate themselves without incurring any permanent damage, either to themselves or to their families. Along the way, they become involved with the spacey and only partially-dressed Lily (Chanel Iman), the spacey and very Caucasian Will (Blake Anderson), and the spacey and oily Austin Jacoby (Roger Guenveur Smith).

As far as the narrative is concerned, Dope is mushy like a marshmellow, often pausing to luxuriate in details that soak up the plot's momentum. That's not a bad thing, however, because the characters are often more fascinating to watch than the story is to follow. Malcolm and Diggy are enacted with great precision by Shameik Moore and Kiersey Clemons, especially, lending substance to the often flighty proceedings.

Leaning heavily on a positive message and sometimes veering into outright fantasy, Dope is definitely not an everyday coming-of-age movie, but it's those qualities that help it stand out.

The film opens wide in theaters across North America on Friday, June 19.

Do you feel this content is inappropriate or infringes upon your rights? Click here to report it, or see our DMCA policy.
Kiersey ClemonsRick FamuyiwaShameik MooreTony RevoloriZoe Kravitz