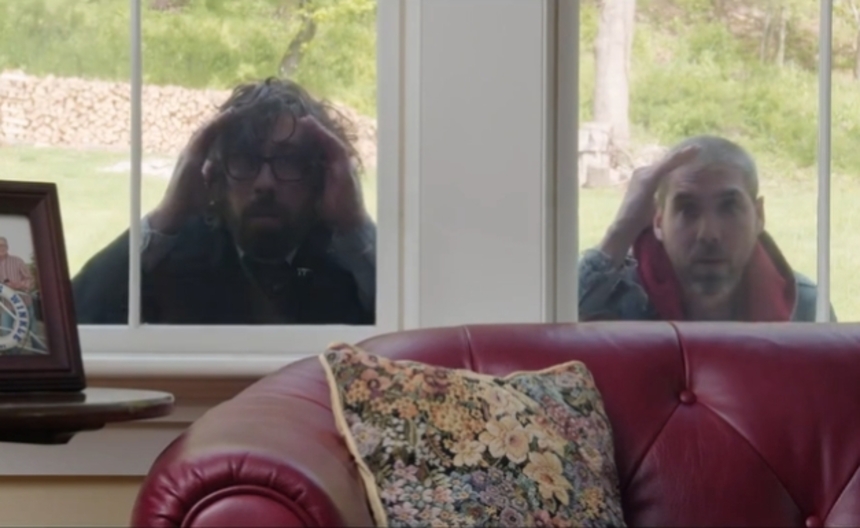 In the superbly static opening shot of Eddie Mullins' Doomsdays, we find two young men making a quick escape from a low window of a handsome Upstate New York home as the real owners walk in the front door, unaware that their abode has been used as a way-stop on their journey to nowhere. One of the pair comes forward in the unbroken shot to slash the homeowners' car tire before they trot off into the deep focus of the frame.

It is an early taste of the many witty, deadpan comic vignettes that gradually combine to form a character (and social) study -- and what just might be the best American slacker film of the 21st century. The bushy-bearded Dirty Fred (Justin Rice), in his wool overcoat and rumpled layers of shirts, is verbose and boozy, whereas Bruho (Leo Fitzpatrick) sports a jean jacket, hoodie and close cropped hair, and expresses himself with a bit more property destruction. Their motto is, "We never stay at any house we are invited."

Fred and Bruho break into and enter a series of luxury homes -- whose absent owners are presumably in New York City -- and go through the pantry, mail, and most definitely the liquor cabinet. Along the way, they pick up a couple more like-minded folks: the young, portly, and enthusiastic Jaiden, and petite stunner Reyna. With two acolytes now in tow, this petty crime spree in a self styled universe that lacks morality or purpose begins to look a bit like a manifesto. All of them are rogue-ishly likeable and shamelessly charismatic on screen, even if they occasionally piss on one another. Anarchy has never been this sweet.

Four distinct personalities are established, passing the time by drinking together, sleeping together, and punching each other in the shoulder. The film is never dour about the oncoming resource shortage, but you get the sense that Bruho has probably seen Chris Smith's Collapse a few times, which has caused him to hate cars to the point of never getting in one. Reyna has a kind of contrary opinion, that people will find a way that leads to yet another banal crisis in the future, so no help there.

Rather than dwelling too hard on the perceived imminent apocalypse, they are intent on taking the piss out of it and whooping it up. (Note that the film's date-driven title cards end on April Fool's Day.) Fred, as always, states it the clearest: "If you are on the Titanic and see that there isn't enough room in the lifeboats, you might as well spend your time at the bar." For people who seem to be doomed, they are nevertheless quick on their toes in any situation where they are caught. They are comfortably at ease in society, even as they exist completely outside of it.

Evoking the spirit of Hal Ashby by way of Withnail & I, but meticulously framed and staged like an old Japanese film, it is no surprise that the director is a former film critic. Yet there is a grace and ease here which is pretty remarkable for a first feature. Across the board, the performances are excellent, and have the feel of the type of cinematic spontaneity that only comes from lots and lots of rehearsal, experimentation, done within the lines of a particular vision.

It takes only a few minutes to become immersed in this wet and leafy world but as time and travail goes on you never want to leave the party.

A slightly different version of this review was originally published in July 2013 during the Fantasia International Film Festival. Doomsdays opens in select theaters across the U.S. on Friday, June 5, and will also be available to watch via various Video On Demand platforms.

Do you feel this content is inappropriate or infringes upon your rights? Click here to report it, or see our DMCA policy.
Eddie MullinsJustin RiceLeo Fitzpatrick