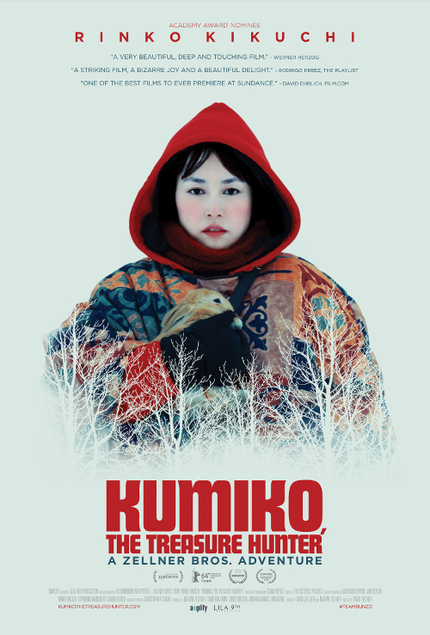 The Zellner Brothers won a whole lot of love with their most recent feature film, the Sundance selected Kumiko, The Treasure Hunter. And with the film due to hit VOD and Digital HD on June 19th and Blu-Ray on June 30th we've got five iTunes download codes to give away to you, the lucky ScreenAnarchy reader. These codes are good for the US iTunes store only and come packed with more than just the film itself, also including alternate scenes, behind the scenes clips and interviews with the Zellner Brothers and star Kikiuchi Rinko.

In this darkly comedic odyssey, Academy Award nominee Rinko Kikuchi (Babel, Pacific Rim) stars as Kumiko, a frustrated Office Lady whose imagination transcends the confines of her mundane life. Kumiko becomes obsessed with a mysterious, battered VHS tape of a popular film she's mistaken for a documentary, fixating on a scene where a suitcase of stolen cash is buried in the desolate, frozen landscape of North Dakota. Believing this treasure to be real, she leaves behind Tokyo and her beloved rabbit Bunzo to recover it - and finds herself on a dangerous adventure unlike anything she's seen in the movies.

You want your chance to win a download code? Simple enough! Just email me here and name the movie that Kumiko mistakes for a documentary. Winners will be drawn at random. Good luck!

More about Kumiko the Treasure Hunter