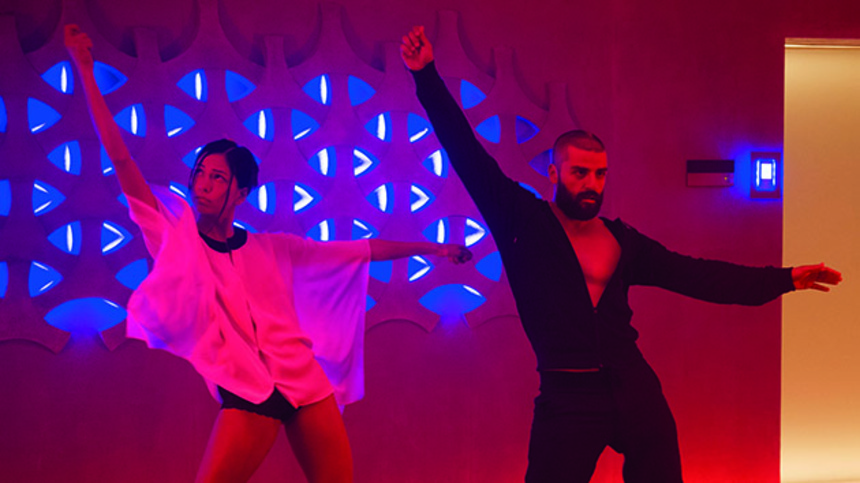 One of the cleverest choices Alex Garland's Ex Machina makes is in its presentation of tech magnate / robot inventor Nathan (Oscar Isaac). He is such a douche.

The movie isn't even subtle about it. There isn't a moment Nathan is onscreen where he isn't being abstractly or directly abusive: of Caleb (Domhnall Gleeson); of his robots, Ava and Kyoko (Alica Vikander and Sonoya Mizuno); or of the rights and freedoms of the human race at large via his "Bluebook" search engine.

There's something cheap and easy in the caricature of the nerdy 21st century genius, in life and in the movies: Steve Jobs in the real world; Mark Zuckerberg in the real world and The Social Network; or Silicon Valley's Richard Hendricks, if you want to deal exclusively in the fictional.

Nathan could easily have been one of those - cerebral, asexual, introverted, and frustrated. He's been living alone in a cabin in the woods building sexy robots, for goodness' sake! He could just as easily have a tattoo that reads "actually, it's about ethics in video game journalism" scrawled across his back.

Instead, Ex Machina takes Nathan in the opposite direction: an alcoholic jock dudebro. (In the Social Network calculus, he's the Winklevoss twins, not Zuckerberg - but if the Winklevii had won, and won early.) Nathan pumps iron. He hikes to the top of a mountain for a chat. (Caleb nearly collapses.) He consumes a bottle of vodka a night and wheatgrass smoothies in the morning, and his coffee table is adorned with an ornamental skull and a bowl of wasabi peas - the go-to party snack of the subtly elitist. What's wrong, Nathan? Too many Doritos in high school?

And he dances. Holy smokes, does he dance. There are all sorts of memeable gifs on the internet of Nathan dancing with Kyoko in perfect time, as though it's "cute," as though that scene and Nathan's behaviour in it is not the top layer of the character's systematic (literally!) domination of women throughout the entire film. As though that synchro dance scene isn't standing in for all the times we don't see Nathan do the other thing he must be doing to the women in his "employ."

"You bet she can fuck," Nathan tells Caleb about Ava, in answer to a question he insists Caleb was about to ask. I try not to imagine all the bench-testing that must have preceded Nathan's calm pride in that moment; Kyoko's automatic removal of her clothes for Caleb in an earlier scene demonstrates it adequately.

Nathan has grand ideas about how sexuality fits into the construction of a personality, ideas which seem to break down in that he's simultaneously kept Kyoko walking around without the ability to interact just because he enjoys fucking her. His words sound a lot like a male-advantageous presentation of "normal" with regard to human sexuality: sex is normal, sex is healthy, everybody likes sex. Nathan's actions, though, seem like the other thing: sex is expected, sex is required, sex is my right as a person.

With Nathan's creations, the robots, there are two levels of meaning at play. One is that, from Nathan's perspective, both Kyoko and Ava are things, whose personhood (evident, I should hope, to anyone who watches the film) is purposely withheld by male captors, and subject to a male-determined schematic - the "test" - of what makes a person a person.

The other is that both Ava and Kyoko are female-identifying beings whose entire sense of femininity and personhood are driven, literally within the diegesis, by male designs, lusts, and interests.

On a larger scale, I'm a big fan of the fact that Ava's A.I. is driven in large part by the collective information siphoned from Nathan's globe-spanning search engine - and not in what people are thinking about, but how they think, as Nathan describes it.

Ex Machina is about many things, primarily artificial intelligence, but to get there, it synthesizes elements of how we interact with technology now. As if the notion of our Gmail accounts tracking everything we've ever Googled in a lifelong spreadsheet of search queries and transforming that information into advertising weren't terrifying enough, Nathan's Bluebook pushes the invasion to the next level. Call it "Bigger Data?"

Mapping how we think means mapping who we are. In the movie's A-story this allows Nathan to derive Ava's artificial intelligence (and by that rationale, proves before Caleb even arrives that Ava must be as human as any of the rest of us).

If Nathan is atypical of the supergenius nerd we might expect to see running Bluebook, Caleb is the original model. The lowly (but super-smart) programmer, single; unconsciously idealizing women while simultaneously (if meekly) standing up for their/Ava's "rights" as he understands them, unaware of the wholesale biases - sexual and otherwise - that are driving that stance.

Caleb is the yin to Nathan's yang, the other end of bro culture, which we didn't know was connected to Nathan's flavour of toxic masculinity until, perhaps, the very last couple of years. I return again to The Social Network, which I think would make an excellent double-feature with Ex Machina. In Aaron Sorkin's (admittedly) fantasy concoction of what drove a nerdy supergenius to create a privacy-stomping friendship A.I. (Facebook), the inability to get the girl drives everything - a raison d'etre so cloying it would torpedo the movie completely if it didn't turn out to be so unerringly on-message for what happened in nerd culture and cyber culture in the real world anyway.

Alpha dudebro Nathan is Zuckerberg/Caleb's dark twin - he got the girl, by doing an end-run around the whole problem set: he built one for himself. And because he built her, she didn't have to have agency, or an independently-arrived personality, or (in Kyoko's case) even the ability to respond and say "no." And, in answer to the question no one in the film ever actually asks: you bet she can fuck.

Do you feel this content is inappropriate or infringes upon your rights? Click here to report it, or see our DMCA policy.
Alex GarlandEx MachinaThe Social Network