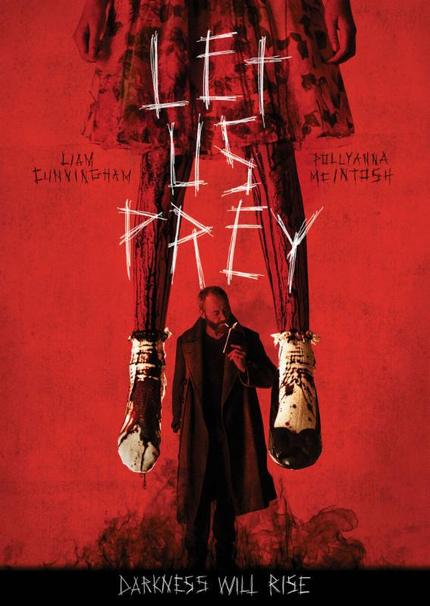 Having wrapped up a very successful - and award winning - run on the international festival circuit, Brian O'Malley's Let Us Prey arrives on disc and VOD in the US today from Dark Sky Films and in Canada via Raven Banner and Anchor Bay Canada and we've got an exclusive clip to whet the appetite.

Rachel (Pollyanna McIntosh, The Woman, Filth), a rookie cop, is about to begin her first night shift in a neglected police station in a backwater town. Surrounded by both disgruntled officers and irate petty offenders, her job becomes all the more difficult and terrifying when a mysterious man (Liam Cunningham, Game of Thrones' Davos Seaworth) is brought in and strange things start happening to everyone in the station.

As it becomes clear that the enigmatic stranger, known simply as Six, has something to do with the supernatural, terrifying events, Rachel finds herself in a fight for her life against cop and criminal alike as one by one they turn on each other. Now she must survive the night and uncover the stranger's true plans for the station's hapless denizens before she too falls prey to the unholy power that seeks to destroy them all.

Check out the clip below!

GAME OF THRONES star Liam Cunningham and THE WOMAN's Pollyanna McIntosh star in this exclusive clip from UK chiller LET US PREY. It hits DVD and VOD today, check out the clip now!

Do you feel this content is inappropriate or infringes upon your rights? Click here to report it, or see our DMCA policy.
cliplet us preyliam cunninghampollyanna mcintoshtrailer

More about Let Us Prey

Could be VERY Good though.
*thinking A Lonely Place to Die vibe; ..It Follows, perhaps -- albeit haven't gotten around to seeing all of this one yet.

This movie had so much potential, but it misses it's mark entirely. It's not much better than the similar film Val Kilmer did a few years ago. I will say the acting is top notch though...