LA Asian 2015 Review: THE CHINESE MAYOR Manages To Be Portrait And Landscape 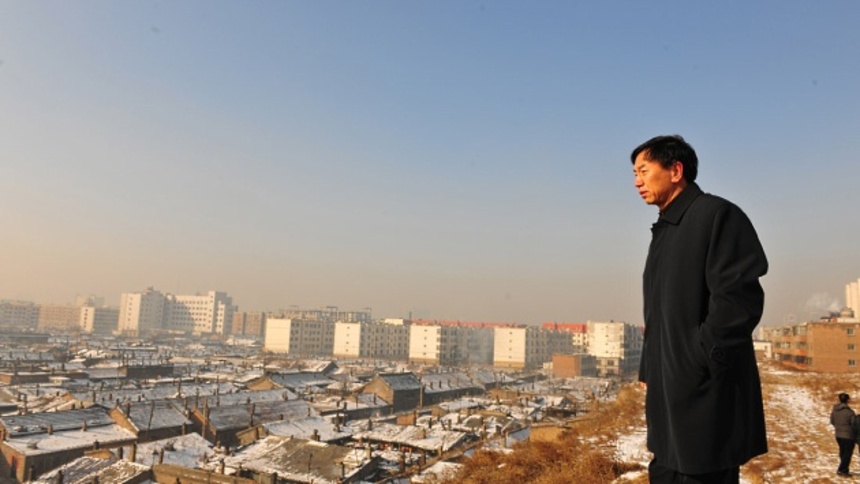 The documentary scene in China is difficult to approach, especially when so many of the works are strictly forbidden to be shown there. With so many independent film festivals being banned and even raided by Chinese government officials, it's truly amazing to see a film that manages to not only approach one of those officials, interview him and even portray him as not a completely glowing figure, but one that has its shades of darkness. The Chinese Mayor is not inherently a problematic film, but it is one that is faithful to what happens in front of the camera, and doesn't shy away because of fear to authority or any prohibition that could be issued against it.

The movie follows a mayor with a vision, Geng Yangbo, mayor of Datong, which was at one time the capital of China and one of the most richly historic cities. It has now fallen to disgrace after being considered the most polluted city in China (and hence, one of the most polluted in the world), but Geng Yangbo has the dream of turning it again into a cultural and at the same time modern city, that mixes both the cultural history and the modern life of China. Lamentably, to do that he has to demolish houses lived in by 30% of the population of the city, and that's where most of the conflict in this movie comes from.

The camera follows the mayor in his daily works, that seem to be endless. He starts a meeting here, and then goes in terrain, and supervises the departments that he is giving to the people that are being transferred from their demolished houses. At the same time some groups of people plead for his presence, camping in front of the government house, and much to my surprise he actually comes out the gate and helps the people. I guess there's no real need to be afraid in a country like China, where after years of the same kind of government, they don't expect some sort of revolution, especially from people that you're trying to help.

It is mentioned by some of the citizens that he actually is the best mayor that they've had, but this documentary isn't a hagiography, as it moves many times from that focus to point to the people that don't have a chance to be in one of the new departments, either because of the location of their house, or the way that it was built, or how the papers are missing. These things prevent them from even going to "cheap" housing, especially those poor in the suburbs, where a giant wall is being built. Geng Yangbo is compared by one of his critics to the emperor that built the Great Wall of China, who history now considers a tyrant.

The film presents both sides of the coin, while also deciding to not put out moments like the times when the mayor asks for the camera to not record or to not come with him on a car trip or a reunion. All this, combined with the beautiful shots of the city as well as the dreadful sights of the destruction of families and houses, comes together as a landscape of the city and its time while under the government of Geng Yangbo. It also, quietly, decides to criticize the way in which officials are "elected", where the members of the Party have to vote "out of one candidate". This is filmed without any resistance as they think it's the most normal procedure in the world, which certifies their so-called democracy.

With a powerful voice, The Chinese Mayor doesn't need to be a loud cry to present its themes and questions. At the same time I do think it's necessary to hear a more revolutionary and reactionary voice that is being quieted down by officials. Not many filmmakers are as lucky as Zhou Hao, or have this kind of access, as well as the intelligence to show what it's needed to be shown, and that is something to think about. This is not Ai Weiwei, but it doesn't necessarily need to be, but I will take both voices to compare, contrast and see what's really going on "over there".

Do you feel this content is inappropriate or infringes upon your rights? Click here to report it, or see our DMCA policy.
Hao ZhouQi ZhaoLi FuZheng HuiMa SuyingGeng YangboDocumentaryDramaNews