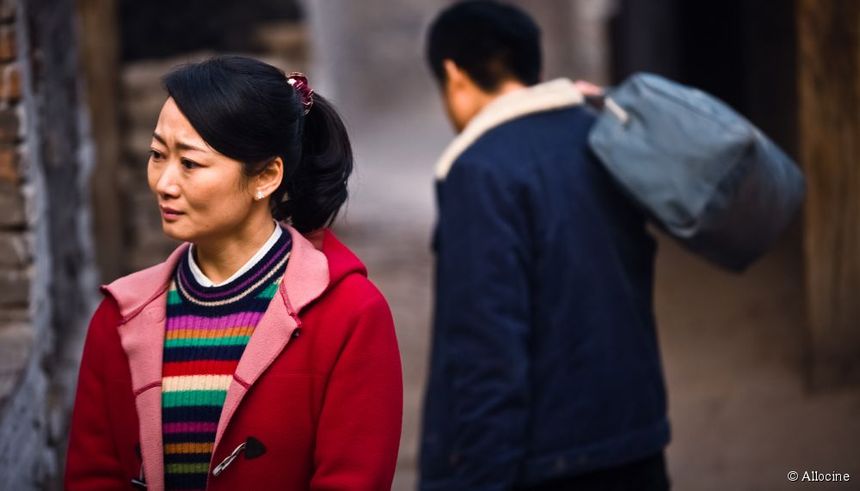 Director Jia Zhang-ke is a big fan of segmented narratives. His last film, A Touch of Sin, was an anthology of sorts tackling different stories surrounding the larger topic of the the modernization of Chinese culture.

In his latest film, Mountains May Depart, Jia again employs a multi-narrative structure. This time the theme is love and loss. And instead of loosely connected stories, this film takes us to three different decades (and different aspect ratios) in one family's life. The result is a creative exploration of Jia's themes that is at times poignant, and at times completely pointless.

The film opens in 1999, where we meet Tao, played wonderfully by Jia's wife Zhao Tao. Youthful for her mid-20s, Tao seems mostly oblivious to the fact her two best friends Jinsheng (Zhang Yi) and Liangzi (Liang Jin Dong) are both madly in love with her. Liangzi is playing the long game, just enjoying spending as much time in Tao's exuberant presence as possible. But things come to a head when Jinsheng, confident from his new-found wealth during China's recent capitalistic boom, buys the coal mine where Liangzi works and give him an ultimatum: he can leave Tao alone and keep his job, or he can start over from scratch.

This first segment is shot in a distinctively video-feeling 1.33 aspect ratio. It is rumored that some of the footage is actual DVCam video from 1999. While this technique is somewhat clever, it is unfortunately moreso annoying to see so much of the screen unused. However the drama in this segment is undoubtedly the best of the three and it also begins with the most iconic scene of the film: a highly choreographed dance number to The Pet Shop Boys' rendition of "Go West."

In the second segment, we fast forward to 2014 and widen out to 1.85. The story is again set in the rural mining town and again Tao is at the center. This time, however, the story focuses on Tao's relationship with her son Dollar and elderly father. Both Liangzi and Jinsheng play ancillary roles.

The second segment is the most outright emotional of the three with the theme of loss at its height. Again Zhao Tao's performance carries the story but in this section, Jia chooses to use fewer gimmicks. The wider format is a welcome change but the space left on the side of the screen belies another approaching time shift.

Sure enough, as 2014's story comes to a close, we jump forward to 2025 and shift all the way out to 2.39. Aside from the drastic change to the future, we also switch locales to Australia and swap Tao as our protagonist for her son Dollar. This proves a fatal mistake as this third segment derails the entire experiment and leaves us wondering why we even bothered.

At the heart of the problem is the general lack of believability in anything that happens in this storyline. Whether it's the not-so-clever jokes about the crumbling US economy or the core idea that Dollar has no memory of his mother, Jia's execution is completely ham-fisted. Not only are we asked to believe that 18-or-so-year-old Dollar would be engaging in a romantic relationship with his 50-something teacher, Jia also makes the preponderous assumption the audience will buy that Dollar (who has forgotten Chinese) has no way to communicate with his father (who he lives with) except for emails translated through Google translator. There is little to appreciate about this third segment save the gorgeous widescreen Australian vistas, and it unfortunately colors the whole experience of the film.

In the end, Jia's latest experiment with time shifting narratives proves to be too clunky to be successful. Taken on their own, the first two stories are enjoyable, though also flawed for reasons other than their plots. What can't be questioned, however, is the strength of Zhao Tao's performance. She makes sitting through this film a worthwhile experience. If nothing else, it's encouraging that we have a director like Jia who is willing to give movies like this a shot, even when that shot is a partial misfire.

More about Mountains May Depart