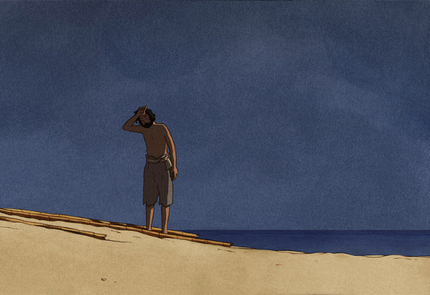 While famed Japanese production house Studio Ghibli is in the midst of a major transition period with nobody seeming to be sure what - if anything - will be the studio's next steps in Japan following the retirement of co-founder Miyazaki Hayao that doesn't mean they're not keeping busy with other things. No, as it turns out the studio embarked on their first ever European co-production back in early 2014 with minimal fanfare and very little public notice.

The film in question is Dudok de Wit's The Red Turtle, the debut feature from the director of Oscar winning short Father And Daughter. The story goes that Miyazaki was so taken by de Wit's short that he reached out to Studio Ghibli's international sales agents, The Wild Bunch, and asked them to track he man down and reach out on Ghibli's behalf. The result is a co-production between Ghibli, Wild Bunch, Why Not Productions, Belvision, Arte France Cinema and CN4 Productions with Paris-based Prima Linea overseeing the animation.

That image up above is the first released still from the picture with word being that Wild Bunch will be presenting the first footage in the Cannes Marche du Film.

Do you feel this content is inappropriate or infringes upon your rights? Click here to report it, or see our DMCA policy.
Animationdudok de witmiyazakistudio ghiblithe red turtleMichael Dudok de WitPascale FerranFantasy