Destroy All Monsters: Death And The Superhero 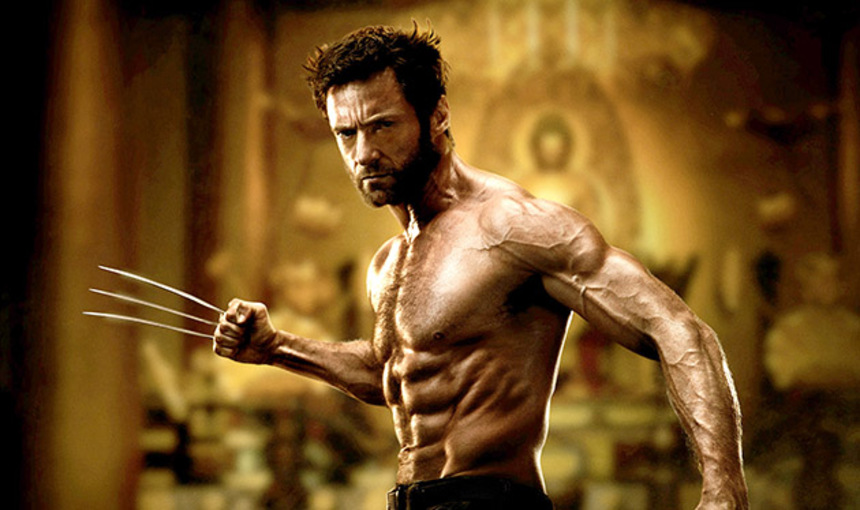 On the weekend, Hugh Jackman posted a picture which seemed to suggest that the yet-unsubtitled Wolverine 3 (or, I presume, Wolverine III, with the i's to be replaced by claws, claw-scratches, or something similar) will be his final appearance in the role that made him famous.

It's an exit long in coming, and surprising only for the degree to which Jackman has tenaciously held on to Logan far longer (and more successfully) than any of us had any business hoping, back in 2000. The man doesn't age, which has certainly helped him; or if he does age, those crags seem to simply disappear into the even-more-holy-fuck-ripped upper body that Jackman turns out with each successive appearance of the mutant on screen.

Last summer I argued that X-Men: Days of Future Past would serve as a perfect end-point for the entire X-Men franchise, if the producers had any interest in the niceties of telling a good story, with a "beginning," "middle," and "end."

Naturally, they don't, and I don't blame them; if such concerns as closure were ever part of the conversation in major franchise filmmaking, those concerns evaporated as soon as the credits rolled on Iron Man 1 and Nick Fury stepped out of the shadows behind Tony Stark's couch. Like network television before it, mainstream filmmaking's 21st century calling card will be Sustain, Sustain, Sustain - an unending plethora of tales with beginnings and middles (and the occasional re-beginning, per Spider-Man), but never, ever anything resembling an ending.

This will pay out great dividends, at least in the short term, and at least in the financial considerations of how these properties are run. I don't even want to guess at what Marvel Phase Three, for example, will be worth in worldwide box office; but with ten films rolling out in four years, all in 3-D or whatever the hell comes after 3-D, it's going to be a lot.

But in a week where The X-Files was brought back from the dead for a new run on Fox, and the details on Rogue One were fleshed out, and I read my umpteenth post-series, in-canon issue of Buffy the Vampire Slayer (the comic book), I am perennially wondering what this death of endings means for our relationship with the stories themselves.

Endings are terrible for franchises, and the last time (I suspect) we'll ever see such a thing on the franchise scale is Christopher Nolan's The Dark Knight Rises, a superhero property where the filmmakers were at such a level of power that they could seal off their entire trilogy like a walled garden that didn't have to play with the other imagined universes, and conceive of an end-point for their Bruce Wayne that hasn't existed in any movie, or comic book, before.

But for everyone else, the name of the game is now the reset button at the end of each episode, much like the unseen force which made sure that the crew of the Enterprise would be right back in their seats in time for next week's opening credits, each week on Star Trek: The Next Generation.

But even Next Gen ended - the episode title itself was a musing on the importance of such things - while these mega-franchises will go on, and on, and on.

There's something troubling about the idea of a story that simply cannot end, cannot die; or a popular culture where fan interest in these properties is such that we will happily revive them after the fact to get a bit more of the same flavour, without considering what such infinite sustainment means for our emotional relationship with the tales themselves.

No one would argue The X-Files ended well, but it ended, and that ending means that the story as a whole has a shape, and an arc, and is something we can actually talk about critically. Now, The X-Files are coming back - and yes, I am delighted, because I am one of those over-rabid fans upon whom Fox is counting - but the ending of The X-Files is no longer an ending, and no further "endings" from the series can be trusted in quite the same way.

Buffy is a better example, but one which has only been extended in comic books, albeit comics written by Joss Whedon. The series concluded on a nice grace note about Buffy's power and her responsibility to others like her; the show has gone on in the Dark Horse comic series, and has sometimes been wonderful, but more and more often feels disappointingly similar to our own, real-world lives: the sun comes up the next day, and more of the same shit happens.

Stories have endings precisely because they aren't like life, except in that life has the ultimate ending, after which we aren't going to be watching any more X-Files episodes anyway. That's what endings in stories, ultimately, are about: acclimatization processes and meaning-building - psychological dress-rehearsals - for the big meaning at the end of it all.

But money is money, and fanbases become more entitled year by year, and no major company is going to turn down that kind of energy, or its potential rewards. So you can kill Coulson in The Avengers, but you'd damn well better have him back on his feet again next summer for Marvel's Agents of S.H.I.E.L.D.. It plays fair within the narrative construct itself - this is a world with Kree in it, after all - but the resurrection adds a Post-It to the death scene in The Avengers, which will be there forever: this didn't actually matter.

The X-Men franchise is playing with its own infinite sustainability by bringing time travel into the frame. X-Men: First Class introduced younger versions of the principal X-characters; X-Men: Days of Future Past threw both generations into the mix together, and in so doing, created a permanent loophole in the question of closure, completion, and narrative arcs for that series: we can always jump to another point in time. As actors age out of their roles, they can be succeeded by younger (or, hell, older) versions of the same thing; the movies will always say X-Men at the head, but the repertory company within can expand and contract as needed to suit the whims of the bench at that particular point.

We'll slowly carve out every available inch of each character's lifespan - surely, Mutant Babies featuring diaper-bound Charles and Erik can't be too far away - and when absolutely every last gasp of air has been expended, the future, alternate timelines, or a wholesale in-continuity reboot (à la J.J. Abrams' Star Trek) are waiting on the shelf to be exploited.

Here's what I'd like to see happen, and I'll be interested to see if Marvel, who is in the best position to try, decides to go for it. In the Marvel Cinematic Universe, prime characters are now on the verge of aging out; Iron Man will be the first example, with Downey retiring to the supporting character list after Age of Ultron and an Iron Man 4 becoming more and more likely with each passing year (and four-year Phase Three road map).

Well, great: let him. Let Downey go, because the job of replacing him will be nightmarish anyway; and having a 60-something billionaire Tony Stark pop up occasionally in Phase Four and Five MCU movies will be a hoot, and a serious value-add.

Aging is normal. Aging is a legitimate, human experience. Like closure in stories, it's the part of human life that gives it weight, and meaning, and purpose over time.

The Marvel comics have been trapped in a perpetual motion machine since the 1960s, and have paid for it by keeping 90% of its roster stuck in their twenties, which has led to the creation of precious few new, viable heroes or stories. (Ultimate-universe Miles Morales, and the recent Ms. Marvel, and my all-time faves, the Runaways, are exceptions that prove the rule.)

The Marvel movies have the opportunity to break that model, and legitimately bring innovation to the superhero genre - print and screen - for the first time since, arguably, the mid-1980s. Imagine a Phase Four where Thor has died, Tony Stark has retired, and Sam Wilson has replaced Steve Rogers as Captain America. It doesn't, ultimately, matter: the movies will still be about superheroic derring-do and will involve a lot of CGI stuff exploding.

But the characters within them, and the weight of those characters' stories, will be afforded the one thing they've never had, up till now: the threat that it all may end, and that they should do the best they can with it while they're still here.

Destroy All Monsters is a weekly column on Hollywood and pop culture. Matt Brown's new podcast about superhero movies, Super Zero, is hosted on the Modern Superior network.

Do you feel this content is inappropriate or infringes upon your rights? Click here to report it, or see our DMCA policy.
Marvel Cinematic UniverseThe X-FilesWolverineX-Men