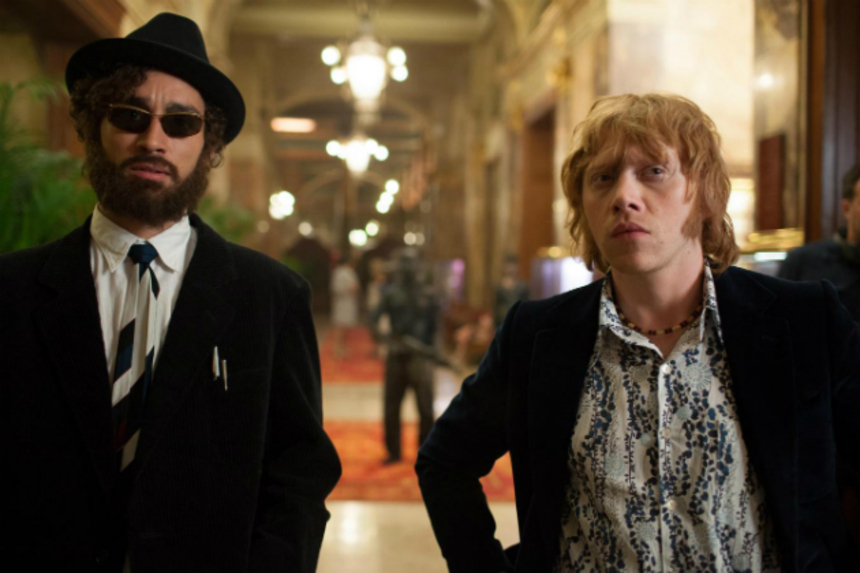 What if you wanted to fake a moon landing in 1969, and could get Stanley Kubrick to do it?

The idea is so silly that it lends itself easily to comedy, and Moonwalkers milks it furiously, spinning into a very broad commentary on Swinging London, complete with numerous topless women, an excess of psychedelic drugs, and a brain-fried Ron Perlman, who must team with well-meaning yet ineffective music manager Rupert Grint to accomplish the task at hand.

Perlman stars as Kidman, a Vietnam War veteran who served three years and is now suffering from post-traumatic stress disorder, plagued by horrifying visions. Nonetheless he is drafted for a dubious mission by the CIA: go to London and secure Stanley Kubrick, fresh off 2001: A Space Odyssey, to stage and film a fake moon landing as a backup in case things go wrong with Apollo 11, the first manned mission to the moon.

Honor-bound, Kidman heads to London to set up a meeting through Kubrick's agent, but thanks to a series of coincidences, instead meets Jonny (Rupert Grint), who pretends to be Kubrick's agent and, upon hearing Kidman's offer of a substantial sum of money, proceeds to enlist his bearded friend Leon (Robert Sheehan) to impersonate the great director.

As noted, it's an incredibly silly idea for a movie, and Dean Craig's screenplay and Antoine Bardou-Jacquet's direction treat it as such, filling the screen with a barrage of lowest common denominator humor and sight gags. The advantage of the premise is that you can't really take anything seriously, which contributes to a very loose narrative flow -- aided by the gleeful quantity of drugs consumed, with no serious ill effects -- and lowers expectations.

That's also the disadvantage of the premise; with the bar set so low, the "loose narrative flow" tends to go downhill, following the line of least resistance. Much of the intended humor falls flat, as might be expected from a very uneven comedy, and there's a certain amount of aimless time spent waiting for jokes to be delivered. When the humor hits -- and it's usually the totally unexpected gags that hit best -- it's funny without being especially clever.

Grint makes for a very personable straight man, teaming up well both with Sheehan, as his drug-addled mate, and Perlman, with whom he gradually forms a begrudging partnership. Perlman is Perlman, a gruff badass with especially wobbly eyes, and Sheehan, who was quite good as an 80s musician in Nick Hamm's Killing Bono (2011), lends a bit of welcome variety, giving a sense of how stoned he is at any particular moment.

It all makes for an agreeably good time, and its setting feels fresh. Its lack of ambition actually helps; all it wants to do is make you laugh, please! It helps if you're a fan of Ron Perlman, or of Swinging London in the 1960s, or of drug humor, or of Rupert Grint, or of fake moon landing movies and very broad comedy with topless women.

Do you feel this content is inappropriate or infringes upon your rights? Click here to report it, or see our DMCA policy.
Antoine Bardou-JacquetRobert SheehanRon PerlmanRupert GrintSXSW 2015Dean CraigStephen Campbell MooreComedy