Review: MICHIEL DE RUYTER Brings All Cannons To The Fore 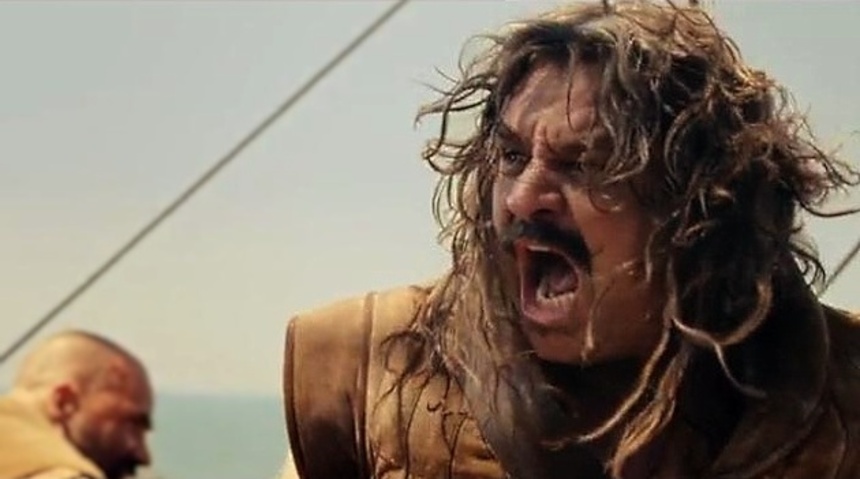 (Fear the man who yells louder than William Wallace, and kills more Englishmen than Joan of Arc!)

In Dutch cinema, there isn't really a tradition of celebrating our (I'm Dutch) historical heroes. Not so much because we don't have them, but because the most famous ones tended to be of the sea-going variety. Piet Hein, Michiel de Ruyter, and Maarten Tromp were all active during the 17th century, in vast, VAST sea battles across the world, and doing their stories justice on film would cost major moolah.

But lo-and-behold: someone rose to the challenge and made Michiel de Ruyter, a film about the brilliant admiral, who was pivotal in securing a future for the Netherlands at a time when it was much beleaguered. The end result is a two-and-a-half hour long film which is surprisingly low on embarrassing moments, and impressively manages a truly epic look at the time period in which it takes place. 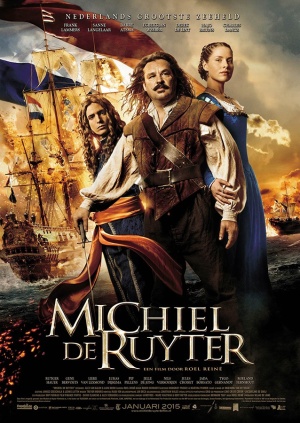 It's the 17th century, which in Dutch history will become known as the Golden Age. After their 80-year-war with Spain, the Dutch are independent, and with money flowing in through the East Indian Company, they are also filthy rich. On top of that, the country is (then) a republic rather than a kingdom, meaning it's seen as a dangerous development by all surrounding countries, which ARE kingdoms.

Being small, rich and dangerous, the Dutch Republic does not lack for enemies, with England being the most obvious one. Trade disputes lead to sea piracy, and declarations of war lead to massive fleets clashing. After one of these huge sea battles, the Dutch are suddenly one dead hero richer but one admiral poorer. Replacements are unsatisfactory until the government appoints Michiel de Ruyter.

An older, retired merchant with a reputation as a brilliant strategist, Michiel reluctantly takes the job. Basically given a blank check, he reforms the Dutch Navy, commands the building of next-generation warships, creates the Marine Corps of elite sea-soldiers, and proves to be a VERY nasty surprise to the British.

With success after success, his popularity soars. But internally, the Dutch Republic is split by several political factions, almost to the point of civil war. When the largest opposing party wins control of the government, their leaders fear Michiel might become a dangerous pillar for a possible rebellion... 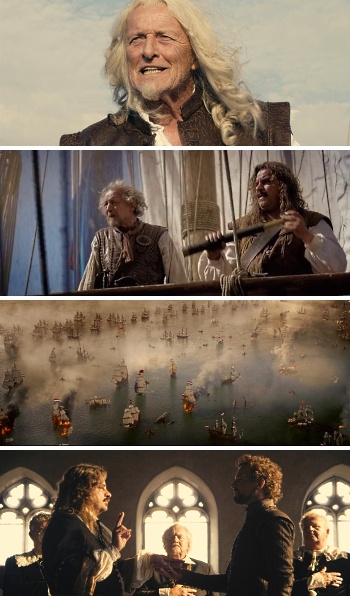 Within minutes after the start of Michiel de Ruyter, we're treated with a look at the battle of Scheveningen, and it's a jawdropper to be sure. Starting with a shore-based money-shot at what basically is an entire sea on fire, we switch to admiral Maarten Tromp, leading the Dutch navy through a confusion of smoke, wood splinters, blood, and cannon balls. It's an impressive start for sure, and thankfully the film mostly keeps this level throughout its running time.

It also shows where the money went on this, the second-most expensive Dutch movie ever made (Paul Verhoeven's Black Book being the number one). Using a canny combination of practical effects, cgi and existing historical locations in Belgium and the Netherlands, Michiel de Ruyter looks consistently realistic. Three real full-scale ships were used for most of the close-up action, and it shows. It's a monster of a production, but one which hasn't gobbled up the quality.

Director is Roel Reiné, back on a Dutch project after an extended stay in Hollywood, where he made the two Death Race sequels, a Scorpion King sequel and the upcoming The Man With The Iron Fists 2: The Sting of the Scorpion. For Michiel de Ruyter he used a Michael Bay-ish approach, with explosions, flag-waving, slow motion, orchestral music, intercutting the action with crying family members and dastardly politicians, the works... Thing is, this approach is mostly effective, and doesn't bring down the film.

Due to a clever script and the way the naval battles are handled, Michiel de Ruyter never becomes boring despite its length. Historical events and battles are simplified or exaggerated, but not to a cringe-worthy level. Painting the political situation in 17th century Europe, without turning into a lecture, takes cutting corners, something which is deftly done here. The battles, which took days in real life, are each shown as hinging on a (dirty) trick or two, but they look different each time, and set up the huge battle of Kijkduin. This is one of the film's highlights, in which a vastly outnumbered Dutch Navy has to stop a combined English-French invasion force from reaching the beach, and Michiel uses every single trick shown in the previous battles to do so.

Acting is pretty strong. Even the supporting acts are filled by often internationally known actors as Derek de Lint and Rutger Hauer, and Charles Dance shows up as a gleefully evil decadent English King (think Tywin Lannister with French hookers). But the main role here is for an excellent Frank Lammers. The real Michiel de Ruyter has a famous face, as he featured on the Dutch 100 florin bill, and there are plenty of statues of him. Showing him as a dashing, handsome lad was therefore out of the question, and the brutish Lammers portrays him rather more truthfully, physically, as a weary Shrek-like figure. In his portrayal, Michiel is a base-born but cunning soldier, doing his duty just so he can be with his wife and children afterwards, and within the story told here that sounds true as well.

With all these good points, is it a perfect film? Well, no. The simplification of politics is necessary, but is done here in such a way that some of the villains turn cartoonish after a while. Also, the excessive use of music gets grating near the end. But they are mere blemishes on what is a damn impressive whole, and once again my general fear and loathing of Dutch cinema prove to be mostly unfounded. This film is definitely recommended!

(Michiel de Ruyter is currently on its finishing lap in Dutch cinemas.)

Thank you for this review, Ard - I really wasn't sure about the film. But you've given me enough reassurance to give it a go! On another note, boy I loved Black Book - I'd been hoping for something equally as good to come out of Holland ever since. I doubt this will be that, but maybe if it becomes successful outside of Holland, there's potential for more.

Does anyone know of a review done by someone who isn't dutch ? it seems it didn't really get much attention outside of our borders, which is totally understand by the way: who would want to watch a film about someone else's historical heroes? i mean i don't think the Brits are major fans movies where when their ships sinking you are supposed to cheer.

Hi Tom, I am an Indian and I really liked this wonderful movie. Here's my Review of it... http://theworldofmovies.com/mi...
I hope you will like it. Thanks!

Thanks Ard Vijn for writing such a nice review.I too worte a review of this movie on my website. http://theworldofmovies.com/mi...
From nowonward I will be a regular reader of your website as I really loved it. Thanks!

Thank you so much !