Review: 52 TUESDAYS, A Revelation In Storytelling 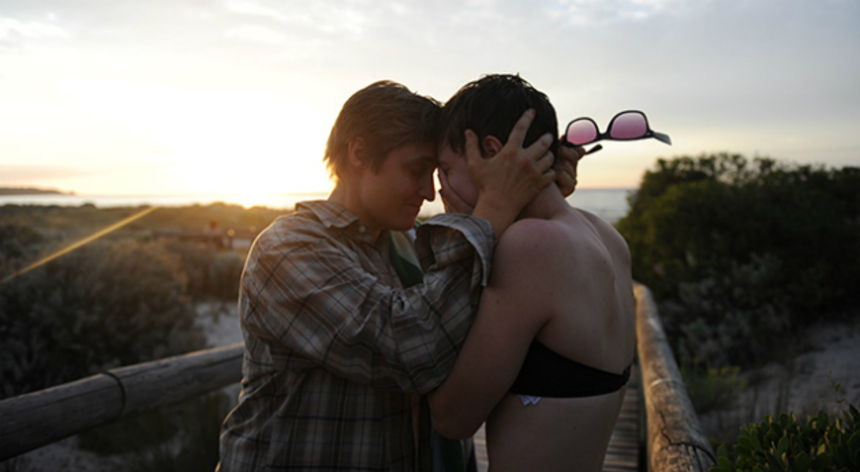 It is rare that a filmmaker's fiction debut feature is as assured, polished, and incredibly moving as Sophie Hyde's 52 Tuesdays.

Winner of the World Cinema Dramatic Directing Award at Sundance 2014 (among numerous awards), not only does it tell the kind of story that is not seen enough on screen, it tells it in such a unique way that will make you wonder why more films do not use its technique. Combining the theatre of immediacy with the intimacy of the cinematic lens, and with extraordinary performances by its leads, 52 Tuesdays is a remarkable film, raw and intelligent, immediate and funny, heartbreaking and uplifting.

Billie (Tilda Cobham-Hervey), 16 years of age, lives with her lesbian mother Jane (Del Herbert-Jane), who comes out as a transgender man. Now to be called James, while he is going through the transition process, Billie is sent to live with her father. James and Billie agree to meet every Tuesday for a year. The film follows both characters as they grapple with their adjustments: James, as he finally comes into his true self, though not without problems both physical and emotional; and Billie, as she not only must adjust to her mother's new existence, but as she begins to explore her own burgeoning sexuality.

Hyde, who co-wrote the story, and Matthew Cormack, the screenwriter, set rules for the film: they would only film on Tuesdays, every Tuesday, for a year, without fail, and they couldn't shoot again if anything went wrong. The actors, non-professionals, were only given the script a few days in advance of shooting, and only for that Tuesday's shoot.
As this is a kind of long-form filmmaking, inevitably some comparisons might be made with Boyhood. But 52 Tuesdays not only is a more interesting story, it has far greater immediacy and displays a lack of control over its environment that is reflected in that story. In essence, the audience is experiencing the story exactly as the actors and filmmakers did, as it happened.

This isn't to say that the film didn't have a script; it did, but it was written as they went along, as Hyde, Cormack and the actors explored the story and relationships between the characters. We (luckily) live in a time, at least in many countries, where transgender people are more visible and (hopefully) accepted. The relationship between a parent and teenager can be difficult at the best of times. But as both James and Billie are learning new things about each other, and themselves, not to mention both going though hormonal changes, what was once a strong, solid mother-daughter bond starts to fray at the edges.
By allowing this to develop week by week, as opposed to setting up a full structure in advance, the story develops organically, allowing the actors (as stated, non-professional) space to find the moments that feel natural. All of the performers are great, but Herbert-Jane and Cobham-Hervey are completely enthralling, their bond as parent-daughter completely believable in its intimacy and its difficulties.
On the one hand, the film is exploring gender and sexual identity. Is it just about the clothes we wear, or how hair grows on our bodies, or are those things just the outer expression of our inner selves? Billie had always accepted her mother as a lesbian, but can she accept James? Her rebellion takes different forms: she cuts her hair to look 'boyish'; after her Tuesday meetings with James, she spends time with new friends Josh and Jasmine, videotaping them as they explore their sexuality (and she explores her own). In equilibrium, the film shows James before the Tuesday meeting with his new lover, again, exploring his new sexual identity.

Sometimes, Hyde only shows a few seconds of a particular Tuesday; other times, several minutes. Some nights, Billie and James just talk and watch TV or eat dinner; sometimes, they dress up in costume and play like children; other times, they argue. And while there is particularly dramatic climax (or arguably two), the film doesn't necessarily have an even tone; instead, Hyde finds the ebbs and flows, letting them unfold, while at moments finding the small moments for the camera to capture, such as how Billie might move her body when alone with Josh, or the difference in James' stride when he's interacting with companions in the transgender community.

Each Tuesday is introduced with its date, often along with footage from a notable international event of that time; the world continues, even as people are wrapped up in personal problems. Or perhaps the opposite: the personal is more important, and in this case, just as political.

This is not an common family drama, as this is not a common family. It both speaks to the problems that most parent-child relationships have, and yet understands that the problems and developments that James and Billie, and those around them, face are not so common. By using long-form filmmaking and storytelling, Hyde and Cormack are asking the audience to understand that families and relationships are processes are opposed to solid fixtures. 52 Tuesdays is a refreshingly honest, thoughtful, and open look at that process, good and bad, happy and sad, male and female, and the spaces in between.

52 Tuesdays comes out in New York on Friday March 27th, at the Quad Cinema, and also online in the USA via Fandor. It will be released in The Netherlands and Luxembourg on May 14th, Belgium on June 17th, and UK & Ireland on June 19th.