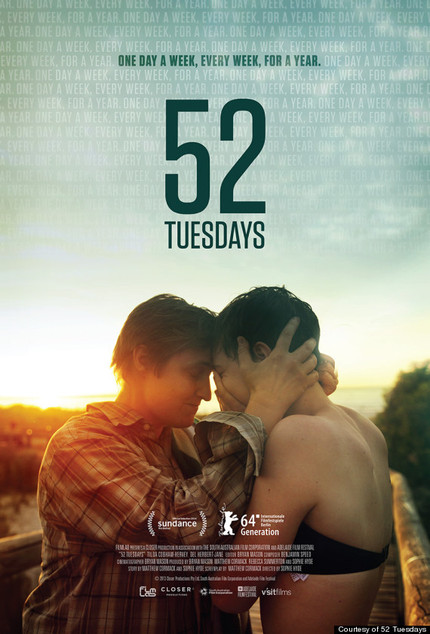 Have won raves around the world on its successful festival run, Sophie Hyde's 52 Tuesdays is now gearing up for theatrical release in Australia and the first trailer has arrived online. Though a work of fiction the film has an uncommon sort of intimacy to it, the result of the unusual manner of its creation.

16-year-old Billie's reluctant path to independence is accelerated when her mother reveals plans for gender transition and their time together becomes limited to Tuesday afternoons. Filmed over the course of a year, once a week, every week - only on Tuesdays - these unique filmmaking rules bring a rare authenticity to this emotionally charged story of desire, responsibility and transformation.

Sophie Hyde's directorial debut, 52 Tuesdays, is a one of a kind film. The fascinating aspect of this intimate story is also the unique form representing the chronology of the story, as it was shot every Tuesday for 52 consecutive weeks. The filmmakers had set themselves the same rule, that they could only shoot on Tuesdays up until midnight and only consecutively, so whatever filmed on that day is what happens in the story on that day. The writers, Matthew Cormack and Sophie Hyde, created the structure first before they decided on character and story. Led by the very real performances of the collaborators playing the mother, "James" (Del Herbert-Jane) and teenage daughter "Billie" (Tilda Cobham-Hervey), the actors, all non-professional, were given the script one week at a time and only given the scenes that they were in. Consequently, the audience is also invited to experience these condensed events happening on Tuesdays.

Get your first taste of this acclaimed film below.