Now On Blu-Ray: Peter Cushing In CORRUPTION From Grindhouse Releasing 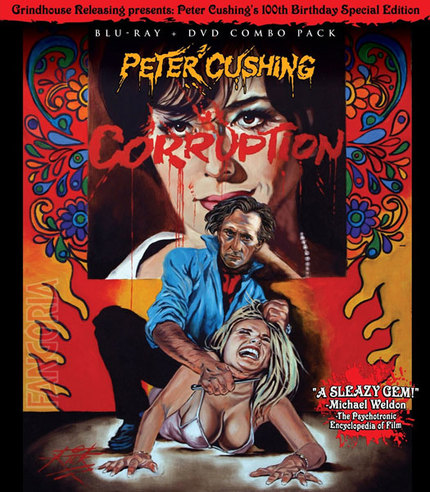 These were the titans of horror films for a good thirty year stretch beginning in the late '50s with Hammer Horror's rise following the release of The Curse of Frankenstein. Price focused more on the campy stuff once he realized he was good at it following his long standing collaboration with Roger Corman and American International Pictures, but Lee and Cushing have a much less fanciful CV behind them. Hammer Films was retelling the classic horror tales introduced to audiences by Universal's gothic romances with the romance largely replaced by vicious violence and unrelenting unpleasantness.

It was this early willingness to go the extra mile to repulse audiences that made Cushing and Lee into icons of the new generation of horror that ultimately led to the grimier horror boom of the '70s.

In Corruption, Cushing plays one of his sleazier roles as a hero doctor who must heal the mutilated face of his supermodel girlfriend. It turns out that the cure is easy, it resides within the pituitary gland of living humans, however, one must remove the pituitary to get to it, what a conundrum. Cushing does as any good boyfriend would and goes on a spree of murder for the sake of beauty, eventually overpowering his own healthy trepidation in an attempt to return his love to her former glory.

Corruption treads the line between swinging '60s psychedelic thriller and flat out horror very well. While in 1968 the giallo boom was well underway, it hadn't really made its way to the UK, so there was no interest in the mystery element of the film, which makes the gory proceedings all the more sleazy. Even in 1968, Cushing was old enough to play a man out of sync with his own time. At 55 he was playing a character clearly out of touch with the youth scene into which he was being thrust by his society gal pal, and that gives Corruption a sort of "Creepy Uncle" vibe that wouldn't have been possible with an actor who was age appropriate for the goings on.

The concept of stealing beauty, or stealing the life force of others (in this case via the pituitary gland) was nothing new in horror. The idea goes far back, probably at least as far back as the story of the the Bloody Countess Elizabeth Bathory, whose story has been told many times on screen.

What makes Corruption exceptional is the interesting dichotomy between Cushing's classical performance and the more contemporary performances of those around him, particularly the members of a hippie gang who eventually show up to investigate the disappearance of one of their own. These frequent clashes of culture are expertly played off by Cushing, who is able to mold himself to the surroundings not in so much as his ability to become like his antagonists, but more in that he's able to recognize and utilize his own looming obsolescence and turn his murderous doctor into a pitious creature who simultaneously repulses by his actions and endears by his own inability to adapt to his new role as fetcher of the dead, not unlike Frankenstein's Igor.

Peter Cushing was probably best known among horror fans as Hammer's Dr. Van Helsing to Christopher Lee's Dracula, and it is that built in recognition as the dogged hero on screen that allows his performances as villain to sting just a little more. It also makes it feel just a little bit more wrong when the moral high ground abandons him, as it does in Corruption. The film is tight and well paced, Cushing's performance bolsters those of the performers around him, and the film feels very much of it's time and in touch with the late '60s in much the same way as many of the AIP psychedelic features of the same period did. I really enjoyed this one and highly recommend it.

Grindhouse Releasing's second Blu-ray release after An American Hippie in Israel is every bit as impressive as one would expect. Corruption is offered on Blu-ray in two different versions, the US/UK original theatrical release, and an "international" version. The former is the preferred version of just about everyone who has seen the film, but that latter has more boobs and blood. Both versions look stellar. The film has been restored with the kind of care we've come to expect from Grindhouse Releasing, and the image is virtually spotless, vibrant and clear, and feels like watching a brand new print, rather than a digital approximation. The audio is straightforward and clear. No tricks or gimmicks, just dialogue, music, and ambient sound all coming from right up front. Commendable.

As I've come to expect, Grindhouse went the extra mile on the bonus material for this one, which means stretching out a bit more than usual since all of the leads are no longer living. The distributor did manage to obtain an archival audio interview with Cushing, and video interviews with several of the supporting players, who are able and quite eager to talk about the project and Cushing's professional manner in particular. There is a commentary track with horror pro Jonathan Rigby and Cushing biographer David Miller, it is lively with plenty of conversation regarding the film's odd marketing and programming upon its initial release.

Beyond that we get lots of text, a booklet features interesting writing on the film, a DVD-ROM version of the director's annotated shooting script, and a filmography. All help to complement the feature and round out this exceptional package for an above average film.

Do you feel this content is inappropriate or infringes upon your rights? Click here to report it, or see our DMCA policy.
corruption grindhouse releasingpeter cushing