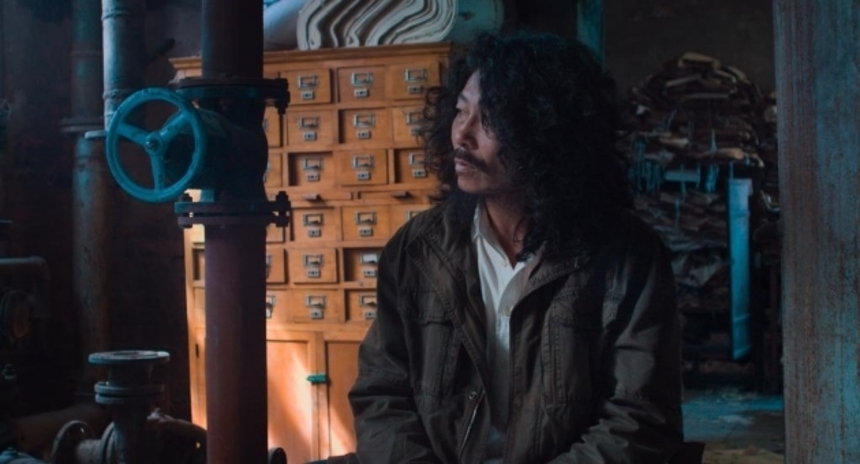 Here is a thought: what if Kafka's Castle was transposed from the cramped, dreary, dark Eastern European city to the airy, spacious word of Inner Mongolia? It is realized by Mongolian director Darhad Erdenibulag and English born Emyr ap Richard in their simply titled film, K. They put a new twist on Kafka's unfinished, ultimate bureaucratic nightmare story (along with The Trial).

Frizzy haired land surveyor K (Bayin) arrives in a village in the middle of nowhere. He gets a very hostile reception from the locals and can't seem to get access to either the castle or the governor Klamm who supposedly has assigned him the job. His path crosses with a series of beautiful women who string him along and feed him only snippets of information at a time which don't amount to much and often contradict each other.

With his two assigned leather jacket wearing assistants (both of whom he names Jeremiah, for convenience's sake), K tries to wade through the local bureaucracy and get to the bottom of the nature of his role.

Then he is told that his service is not needed anymore that there was a miscommunication. Now he has to report to the local school to be a school janitor. It seems that it's a taboo to criticize the castle and its bureaucracy because it's flawless even though it's obviously not. I mean, his whole situation is bungled.

It also seems that all the Castle employees are feared and all the girls are only at their disposal for sexual favors. A beautiful mistress of Klamm, Frieda (Jula) who works as a barmaid, becomes K's companion but ultimately leaves him for another, less important man (is it Jeremiah or Arthur?). But in order to not to piss off all mighty but unseen Klamm, she needs to go back to the being a barmaid.

The directors smartly stick to Kafka's dialog and western names faithfully and through Mongolian actors and their language, the effect is quite otherworldly. Other than K wandering the windswept landscape in the opening, the rest of the film takes place exclusively in simple interiors mostly with natural lighting. It has an airy, hazy feeling of eternal morning. Everyone, including K sleeps a lot and conduct their business in their beds. With this eternal sunlight seeping through the windows, K has a feeling of a lucid dream.

Concerning the film, the only comparison I can think of is Erik Skjoldbjærg's neo noir classic, Insomnia. Of course K doesn't really work as a thriller, but with its somnambulist protagonist who finds himself lost in a moral and literal fog and paranoia, it is very similar to that of the Norwegian film. I didn't think of the Skjoldbjærg's film as Kafkaesque before. Heh.

K is a different, artful interpretation of the source material for sure. But Kafka's writing is usually associated with grim reality and unfathomable pressure associated with living in a certain immobile social stature: life as an entrapment. Not to mention the author being Jewish in an oppressive society.

Bureaucracy can be universal, but compared to the characters in Kafka's original writings, what Mongolian K is experiencing seems not quite hopeless enough. As one of the characters says to K in the film, "Sometimes the smallest thing can become a great irritancy"; for us, irritation seems to describe what K feels, not life-long suffering.

Do you feel this content is inappropriate or infringes upon your rights? Click here to report it, or see our DMCA policy.
Darhad ErdenibulagEmyr ap RichardKkafkamongoliand/nf 2015new directors/new films