Winner of the two prizes at the Venice Film Festival 2014, Chaitanya Tamhane's Court lends an earnest look at India's judicial system. The film is a sobering, eye opening experience.

It starts with an arrest of an old folk singer and tutor of children, Narayan Kamble (Vira Sathida) at an outdoor stage in a Mumbai slum, as he sings an incendiary, but deliciously catchy song about government corruption and unjust system. In the court, he is accused of abetting the suicide of a sewer worker who died in a manhole. It was one of his songs that allegedly drove the worker to his death. He was working the same job for 5 years but he was found dead without any protective gear inside the manhole, so says the prosecution.

The charges are obviously absurd and unfounded, but as we soon learn, everything needs to go through the judicial proceedings. Narayan seems to be used to this: he's been a radical activist in the slums since the 70s. When he is asked if he wrote and performed a song, "Manhole workers should suffocate and die," he wryly responds, "I haven't written that one yet, but now I might."

It's his human rights activist attorney Vinay Vora (Vivek Gomber, who also serves as a producer) who is more affected by the arrest because without bail, the possibly lengthy trial and being in the judicial custody will undoubtedly worsen the health of the 65 year old defendant. The presiding judge, following the procedure by the rules, just orders that.

A John Grisham Courtroom thriller it is not, Court has no star witnesses or heart stopping twists and turns. The crowded courtroom is shown in static shots where other cases are waiting one after another. Narayan's case is one of many of that day in front of the same judge. With the rigid caste system, the film paints a much more complicated picture of the society than a simple white-trash-been-done-wrong-by-the-big-corporation scenario. Tamhane avoids the film becoming a melodramatic hero/villain story. We don't see Narayan in jail at all. Instead, the film follows the inner lives of Vinay the defense attorney, the public prosecutor (wonderfully played by Geetanjali Kulkani) and the judge (Pradeep Joshi) in succession.

Vinay is the face of India's global elite society: from a wealthy household, he drives an expensive car, listens to jazz and hangs out with his suave friends in chic bars where a musician sings English and Portuguese songs on stage. Still living at home, he is seen throwing tantrums at his nagging parents. Yet he is a compassionate one, trying to do right by his defendant.

We see the prosecutor taking public transportation, talking to her friends about the latest fashion, picking up her son from childcare, going home and cooking food for her diabetic husband. Her family time is in front of the small TV set. For entertainment, her family goes to see a comedy play that is extremely jingoistic. For the judge, he goes to a water park with his large extended family for the summer vacation. 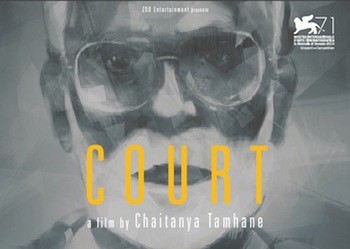 For our public prosecutor and judge from the middle class backgrounds, even though they are socially close to the defendants they are persecuting, they process the cases by the book, lacking any kind of sympathy or considerations. The film raises questions about the nature of our society where only the wealthy can afford to be compassionate and the within-the box-mentality of the judicial system.

After finding out the prosecution's witness is likely bought by the police, and the wife of the dead worker testifies that the dead man never wore any protective gear while cleaning the sewer and drank heavily before the job to ease the smell (these facts are revelatory for everyone involved), the case against Narayan is dismissed and the bail is granted. Vinay ends up paying for the bail.

The most powerful and telling scene plays out in a car ride. After testifying, the dead man's wife and her family is chaperoned by Vinay in his white sedan. He instructs her to fasten her seat belt which she doesn't seem to know how to. It's her bewildered expression as the car passes through the streets of Mumbai that tells a thousand words. She fled out of fear to her village when her husband died and doing so she lost her job in the city. She tells Vinay that she would take any kind of job so if he knew any, please send them her way. She doesn't want his monetary help, she just wants a job. He drops them off in a slum populated by a murder of crows.

The next scene is Narayan getting picked up by the police again from a printing press factory while supervising the printing of his book "A History of Humiliation". This time, the charge is using his tutoring place as a breeding ground for terrorist elements who are obviously into seditious activities. The police's persecution of the untouchables continues, packing up the courtrooms, making the procedure an unending cycle.

When Vinay protests that summer recess will put the defendant in judicial custody for a long time, the same judge replies, "We are closed, but you can always take it up to High Court."

All the performances are stellar, considering many of them are non-actors. In the heart of it all is Vira Sathida. A real life activist, his rhythmic, infectious, biting songs come to life whenever he performs. I would love to see him perform for hours.

Tamhane's understated, layered script highlights the lack of understanding among different social strata in a complex society which is still deeply bound in tradition in the 21st century. As the film ends with the judge falling asleep on his chair on his vacation, the audience is left to grapple with the death of a sewer worker who's already forgotten by everyone. It is also chilling to think that there isn't going to be any kind of investigation on the condition of these lowly workers. Biting and devastating, Court is one of the real standouts of this year's New Directors/New Films.

Court plays part of ND/NF 2015 at FSLC on 3/26 and at MoMA on 3/28. Q & A with director Chaitanya Tamhane will follow each screening. For more info, please visit ND/NF website.