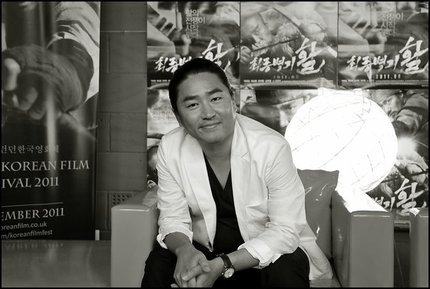 In the wake of the record-breaking success of last summer's Roaring Currents, Kim Han-min is opting to remain in the period war genre as he is busy preparing a new film called Bongoh Town Battle (working title), about a two-day skirmish between independent Korean forces and the Japanese army in Manchuria in 1920.

A little known event of the Korean independence movement during the Japanese colonial era, the battle, which pitted 1300 Korean guerilla fighters against a Japanese battalion numbering 500 troops, was an overwhelming victory for the independence fighters. With Korean forces beating or repelling Japanese invaders against the odds, the story bears some resemblance to Kim's previous blockbuster

It is also known the director Kim is planning to make an Yi Sun-shin trilogy, as well as a documentary on the famed Admiral (due this summer), though this new project will take precedence, pushing back the two installments that will eventually follow Roaring Currents.

Preparations for Bongoh Town Battle are well underway, with scripting almost complete and casting calls already sent to talent agencies. Shooting is expected to start in the second half of the year.