What inspired this extravagant and glamorous parade?

Countries around the world nowadays compete ruthlessly to attract film productions. From Panama to Lithuania, all offer financial incentives to film-makers to take their productions there. Thailand has always done remarkably well in attracting international productions. In spite of having no incentives, martial law and a coup, last year Thailand welcomed over 600 productions. The truth is that if you want to make a film with jungle, beaches, mountains, and rice-fields, Thailand has always been the 'go to' place. However, competition from Malaysia, the lack of incentives, rising prices, and a shortage of infrastructure (no big studios, water tanks, etc) means that Thailand's position is under threat. One also must not underestimate the fact that five years ago, one would have been crazy to consider filming in neighboring countries like Myanmar, Laos, or Cambodia. But now these countries are becoming more accessible.

So Thailand came up with TIFDF, the only festival in the world themed not around the genre, length or style of a film, but around the fact that the films were shot in a particular location - Thailand. This festival rule made for an understandably mixed bag.

First to the films of note.

The film is a deeply satisfying metaphor for everything ailing Japan after the glow faded from its economic miracle years. Director Yoshida skilfully details a sclerotic culture, on the cusp of the digital age, sliding into a malaise of material corruption. The rot has set in not only into the younger generation's feckless materialistic aspirations but also within the hierarchy of the banking system.

Almost stealing the film from the enigmatic Miyazawa is Kobayashi Satomi, playing bank supervisor Yorika, a  helmet-haired,  stern eyed guardian of the disciplined old order. Yoriko is being readied for the junk heap. Her crime: she is no longer young.  Yoriko will, however, not go quietly - especially as she starts to suspect financial shenanigans within the bank. 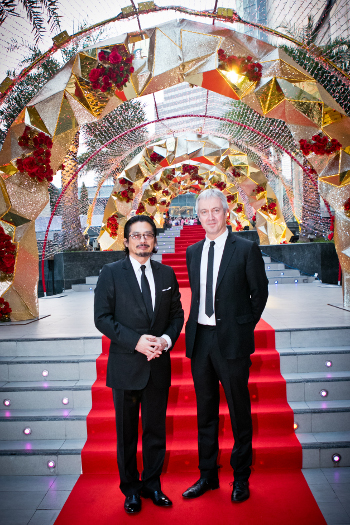 The festival also featured a welcome screening of Jonathan Teplitzky's The Railway Man.  The film is a deeply satisfying examination of the cathartic effect of forgiveness between Eric (Colin Firth), an ex-POW on the notorious WW2 Thai Burma railway and his Japanese tormentor Nagase Takeshi (Hiroyuki Sanada) .

In most films, Thailand is used mainly as a backdrop for either its gorgeous scenery or hectic capital.  In The Railway Man the country's history and in particular the actual location of Hellfire Pass, where men perished by the thousands, is used in powerful, terrifying flashback scenes. As reported by the producer Andy Paterson, Eric's wife Patti  (Nicole Kidman) summed it up best when visiting the scene of the crime many years later:  'I wouldn't have lasted a day out here'.

In addition to producer Paterson, the actor Sanada Hiroyuki, attended, and the festival must be given credit for the fact that of the ten films, nine were followed by Q&As with international and local film-makers and cast, all entertaining and informative.

Zero Tolerance was directed by Wych Kaosayanda, a Thai director who had a brief career in Hollywood, directing Ballistic: Ecks vs. Sever. Wych's latest film was originally released in Vietnam in 2012 under the title Angels, starring Dustin Nguyen, Gary Daniels and Sahajak Boonthanakit. It tells the story of a Vietnamese ex-special forces guy (Nguyen) whose daughter turns up dead in Bangkok. The Thai policeman charged with the investigation (Boonthanakit) is an old friend, and together they seek both justice and revenge.

After a disappointing opening the producers dragged up fresh funding and shot extra footage with Scott Adkins and Kane Kosugi. The  film was re-edited, placing more emphasis on action, and  has re-emerged as Zero Tolerance.

The muddled pedigree of the film is evident throughout. It ends up working neither as a serious crime drama, nor as a commercial action film.  The editing now highlights the scenes of violent gun-fights, where our two heroes take on whole whorehouse-fulls of gangsters, with no mercy or remorse.

Nguyen and Boonthanakit give good performances, but they cannot rescue the film any more than they can rescue the victim. When Ballistic was released, it was criticized for its plot holes, clichés, senseless violence and an incoherent script. Sadly, Wych brings these same qualities to Zero Tolerance.

Making a rare appearance was Charles De Meaux's 2011 film Stretch. The film made the news when it lost its star David Carradine in Bangkok to suspected asphyxiophilia during the filming. The story follows the rise of Christophe a young French jockey who, when suspended from racing in France, journeys to Macao where, despite his best efforts,  he is sucked into the murky corrupt world of a sport run by gangsters.

As result of Carradine's tragic death, watching the film becomes something of a cinematic forensic exercise as one tries to work out how much footage of Carradine was missing, and how the film was pieced together without him. De Meaux faced legal action from Carradine's estate for failing to take due care of the star, and in the ensuing legal dispute, the film virtually disappeared. De Meaux seems to have struggled mightily to overcome a host of obstacles.  Six years on from the time it was filmed, it was a brave and interesting choice for the festival, and De Meaux was rewarded with a packed house.

Director Bill Muir's  The Lost Medallion was billed as a 'faith-based' film.  Turns out the film is warm-hearted and well-executed, with strong performances by all. Muir aimed to make a wholesome family film, and managed to do so without being prudish or preachy. The 'faith' it prescribed was more about faith in ourselves. This is exactly the sort of film parents can enjoy watching with their kids without feeling guilty that they might be ruining them for life, so one has to say that Mr. Muir succeeded.

Bringing up the mixed bag portion of the festival  came  the woefully scripted and shamefully executed horror flick Pernicious as well as the culturally untranslatable Indian comedy Entertainment and the slightly less perplexing Malaysian film Bikers Kentai. Dragged out from the back catalogue was the affable 2011 straight to DVD, The Prince and Me Four.

Receiving its premiere was a potential late night cult classic (unintentional) Last Flight featuring a crazy vampire cat creature slashing its way through a sparsely occupied jumbo jet liner.  The film was unfortunate enough to be released just after the loss of Malaysia Airlines MH370, and so barely got a release in China. But thankfully, TIFDF recognized that this gem could not be missed.

Last but certainly not least is the 'Amazing Thailand Film Challenge' which is a part of the festival, and this year flew 72 international film students to Thailand to make a short film. With the aid of a budget, local PAs and a van, they had seven days to tell their Thailand stories.

The winners were given generous cash prizes and feted at the gala.  I would encourage any and every ScreenAnarchy reader (who is currently a student) to friend the Amazing Thailand Film Challenge Facebook page so they can get an early heads up on next years competition. There really is no film student film competition quite like it.