SHINJUKU SWAN: Watch The Teaser For Yet Another Now Sono Sion Film 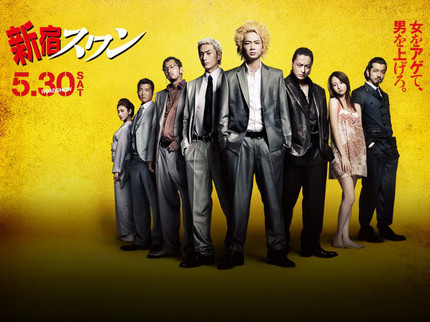 There are American directors for whom six feature films represents a lifetime of work. For Japan's Sono Sion, six pictures will reportedly be his output for 2015 alone. Prolific? Oh, yes, on a scale that's going to make it very difficult to keep all these titles straight.

Hitting screens in May will be Shinjuku Swan, an adaptation of the Wakui Ken manga starring Ayano Go as a young man who becomes a recruiter for the sex industry with Sawajiri Erika starring as one of the working girls.

Sono has always had a fairly blithe acceptance of sexual exploitation in his films which, coupled with the source material, means this one may very well occupy a troubling space for many, though given that Sony is planning a fairly wide release for the picture in Japan I wouldn't expect the content to be particularly extreme.

The first teaser for this one actually arrived back in January but we've just come across it now. Check it out below.