Review: OUT OF THE DARK, Strong And Persuasive Suspense In South America 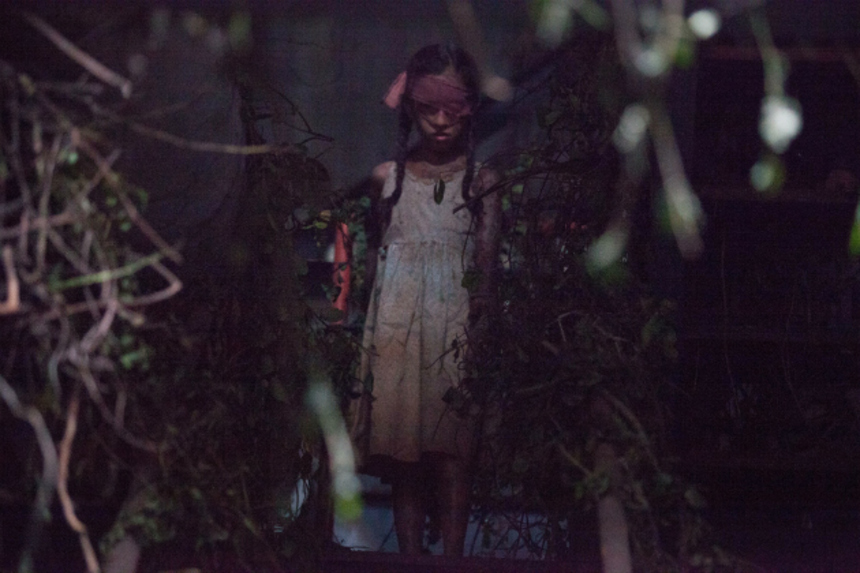 Attention, white people: Why do you keep going where you're not wanted?

At first blush, Out of the Dark falls easily into the category of horror films in which white people -- usually Americans -- trespass into unknown territories, leading the natives to exact a terrible vengeance upon them. Sarah (Julia Stiles) and Paul (Scott Speedman) move to Colombia, South America with their young daughter Hannah (Pixie Davies). Sarah is meant to become manager of a large paper mill owned by her father, Jordan Harriman (Stephen Rea). The factory is the town's largest employer, and Jordan is proud of his accomplishments to benefit the local populace.

Early signs point to trouble in paradise, however. The movie's prelude is filled with dark omens from decades past at a large house in the countryside and, lo and behold, that house is the new residence of Sarah, Paul, and Hannah. While Sarah heads to the factory the next day, Paul, an illustrator, stays home and watches Hannah until the arrival of the nanny, Catalina (Vanessa Tamayo). Within about 24 hours, Hannah wanders off from nearby adults twice, each time ending up in an ominous moment, reinforced with a dramatic WHAM! on the music score.

The ominous musical stingers are way overdone, but director Lluís Quílez -- making his feature debut -- steadily tightens the narrative rope with thoughtful framing and varied staging, aided and abetted by Isaac Vila (his longtime director of photography), Bernat Vilaplana (a veteran editor), and the remainder of the cast and crew.

For much of its running time, Out of the Dark is a slowly-building suspense drama that maintains attention thanks to the quality of its production components, but that's not to minimize the subtle intelligence of the script by Javier Gullon, David Pastor, and Alex Pastor. (The latter two collaborated on the very good Carriers, among others.) Without giving things away... it's good. 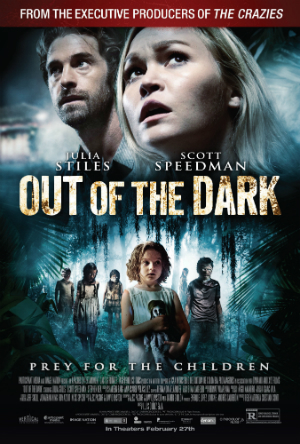 Stiles, especially, is impressive. As it happens, it wasn't too long ago that I finally caught up with The Omen, in which she plays the wife of a U.S. ambassador and a mother of a young child, dealing with horrors of another type.

Here she flips that on its head, playing a character who is more proactive as well as the clear breadwinner of the family. She is happily married and secure, and fully supportive of her husband's modest artistic endeavors. Speedman has played this type of role before, in which his character is secondary to his mate, which makes his actions later in the movie entirely understandable.

While there are a few elements in Out of the Dark that don't make much narrative -- or even logical -- sense, overall I was swept along by the film's ultimately strong point of view and persuasive sense of right and wrong. I liked the way it tackled the stereotype of 'white people attacked by brown people' and emerged with a clear-cut verdict. The movie is a fine thriller that has something meaningful to say about the world we live in.

The film is now available to watch via variou Video On Demand platform. It opens in select U.S. theaters on Friday, February 27.

Do you feel this content is inappropriate or infringes upon your rights? Click here to report it, or see our DMCA policy.
ColombiaJulia StilesLluís QuílezScott SpeedmanStephen Rea

More about Out of the Dark