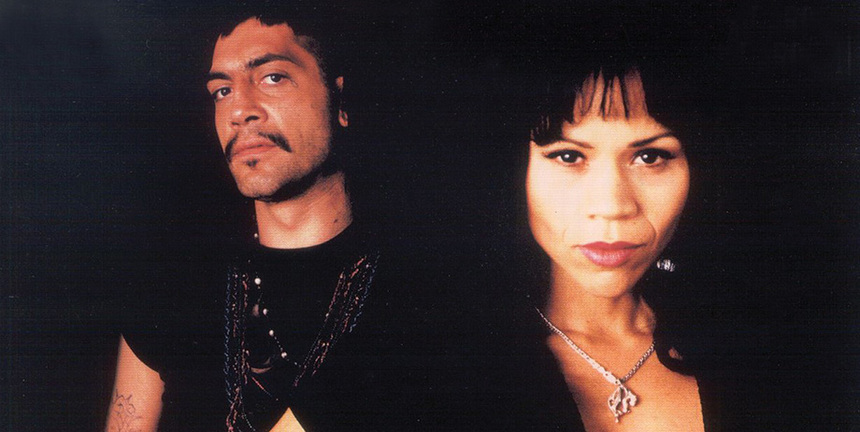 Hey, Toronto! ScreenAnarchy is proud to present Dancing With The Devil - an extensive retrospective of Spanish maverick Alex de la Iglesia unspooling at the TIFF Bell Lightbox. Things continue this week with a February 7th screening of his Perdita Durango and we want to give you tickets!

De la Iglesia made an ambitious bid for the English-speaking market with this balls-out adaptation of Barry Gifford's 59° and Raining. A typically grim Giffordian tale of mad love, hot cars and ultraviolence, the film stars Rosie Perez as the title heroine (previously played by Isabella Rossellini in David Lynch's Wild at Heart), who hooks up with lusty, loose-screwed bank robber/witch doctor Romeo Dolorosa (Javier Bardem, sporting another in his long line of bizarre haircuts) and joins him in his quest to sacrifice a pair of teen lovers to his dark gods; James Gandolfini co-stars as a determined DEA agent who pursues the passionate pair as they cut a bloody path down Mexico way. Perdita's potent blend of outrageous humour with graphic sex and violence made the film too hot to handle for de la Iglesia's American distributors -- who cut it for content and sent it direct to video under the title Dance With the Devil -- and it suffered further significant cuts in many territories around the globe. We are delighted to present Perdita Durango tonight in its original, uncut Spanish release version, courtesy of LolaFilms.

Do you feel this content is inappropriate or infringes upon your rights? Click here to report it, or see our DMCA policy.
alex de la iglesiadancing with the devilgiveawayPerdita DurangoretrospectiveTIFF