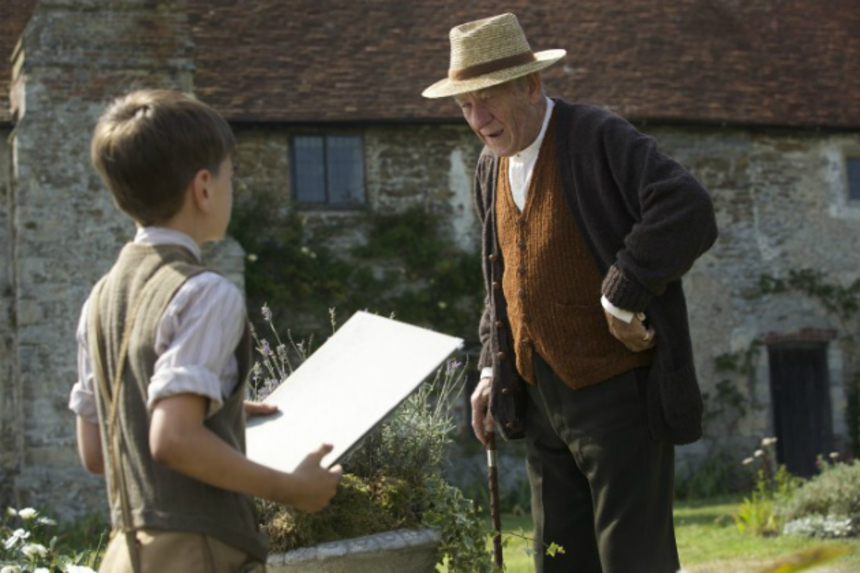 According to Guiness World Records, Sherlock Holmes is the most portrayed fictional character, by more than 70 actors in over 200 films, plays and television shows. I haven't seen all of those, but Ian McKellen can certainly put his performance near the top of the list of great ones (my favourite will always be Jeremy Brett).

Reuniting with director Bill Condon (Gods and Monsters, Kinsey), McKellen brings the world's greatest detective to life in a somewhat sedate mystery, more of an examination of the ravages of old age and senility, and the guilt that can prey upon those who have perhaps been a bit too insensitive. While not a surprising film, in that the story unfolds in expected ways, Mr. Holmes (based on the book A Slight Trick of the Mind by Mitch Cullin)is still an engaging film, sure to please even the most discerning Holmes fan.

Holmes has been quietly retired for three decades in a small seaside town in southwest England. In 1947, at age 93, he lives alone but for his housekeeper Mrs. Munro (Laura Linney) and her young son Roger (Milo Parker), who dotes on the aging genius. Senility and memory loss are setting in fast, and Holmes tries to write the story of his last case (whose conclusion made him despondent enough to retire), while at the same time recalling a recent trip to Japan where he procured something he believes will help his memory. While trying to put to right what he sees as serious factual errors in the stories about him, he begins to realize how his devotion to facts have blinded him to the subtleties and depths of human nature and emotion.

As with Gods and Monsters and some of Condon's other films, Mr. Holmes is less about the work of the genius per se, and more about the effect of the work on the genius. While old age brings memory loss for all, such loss is particularly felt by someone like Holmes. Attention to detail is his trademark, and now he reduced to writing people's names on his shirtsleeve to avoid embarrassment. He treats his housekeeper with more than a little indifferent disdain, but takes Roger under his wing, as if to keep off death.

There are two sets of flashbacks: one of his recent trip to Japan, the other of his last case. In the former (which happened just before the time of the film's story), he sees how out of the world he has been when exposed to the ravages of the atomic bomb; this is juxtaposed against his Japanese host's misconception between Holmes the character and Holmes the man. Holmes is struck by what he used to sees as people's strange obsession with persona over the realities of true horror, and his own ignorance over how deep grieving can drive some people insane.

In the latter world, he sees how his own hubbis and commitment to discovering truth, perhaps more accurately, facts, has isolated him from human affection. He tries to make up for this in his relationship with Roger, much to the chagrin of Mr. Munro. She is a poor, not highly educated woman who must do the best she can after being widowed by WWII. Roger is a clever boy, frustrated at being stuck in the working classes and menial jobs, and rebels against his mother through Holmes. For Holmes, his attempt to rewrite the story of his final case as it really happened (as oppose to Watson's invention) is as much an attempt at atonement as clarification, though he can't remember what he is atoning for.

It would be hard to imagine McKellen not excelling in this part, and of course he does, bringing his skill at creating an understated yet powerful performance. Having to play more feeble than I would assume he is in real life, McKellen easily yet movingly portrays how the ravages of old age on the mind are far worse and more disheartening than those on the body. As for Linney, the part seems somewhat slight for an actor of her talent, but she adds depth to her character whose struggle for a decent job and life for her and her son is marred by her son's ambitions which she, in her economic status, will never be able to fulfill. Parker is very engaging as Roger, conveying the character's advanced maturity and yet boyish curiosity, more than able to hold his own against the seasoned McKellen and Linney.

As with most UK period films, the production design is excellent, with great detail put into furnishings and props to add to th authenticity that a film like this requires. There is also a fantastic scene where Holmes goes to see a film adaptation of one of his cases; in this film within a film, the detective is played by Nicholas Rowe, who some readers may remember played the detective decades ago in Young Sherlock Holmes.

Mostly, this is a film about the story, and it comes down to McKellen as the focal point of the themes of age, memory and atonement for perceived sins. While the ending veers perhaps a little too far into sentimentality (something that might not have agreed with Sir Arthur Conan Doyle), it is pleasurable to the audience. While it will unlikely be the most memorable of Condon's films, it will certainly be one of McKellen's most appreciated performances, and a worthy addition to the Sherlock Holmes cannon.