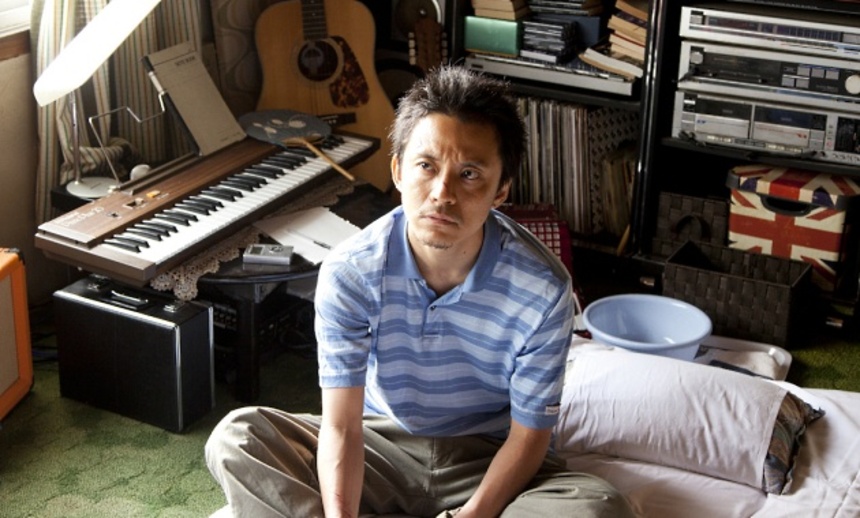 (How a thug's head sometimes contains both rock and a hard place...)

If director Nobuhiro Yamashita is going to be remembered for something, it will be his ability to keep things real, to tone down craziness to an acceptable level, to keep the story down to Earth. In his best-known film Linda, Linda, Linda, his band of schoolgirls doesn't suddenly attend an international contest, but just try to be awesome in front of a local crowd. And in Tamako in Moratorium, shown at last year's Rotterdam festival, he had a superpopular pop star at his disposal, yet made a film about her being a girl who does nothing for a year.

Almost being a mix of those two films, Nobuhiro's newest La La La at Rock Bottom fits perfectly in his oeuvre. It features a pop group and indeed another real-life pop star breaking into acting: Subaru Shibutani, member of the incredibly popular band Kanjani Eight. And once again, Nobuhiro Yamashita delivers a pleasant film where all the actors shine.

In La La La at Rock Bottom, a struggling amateur pop band discovers a beaten-up man with amnesia. As nobody knows what to do with him, and intrigued by the fact that the stranger has quite an educated singing voice, the young widow who manages the band takes him into her home. Docile and robotic at first, slowly but surely the man starts to heal, and quickly becomes able to do small jobs around the house and sing in the band. But the more he sings, the more it jogs memories in him, nasty memories of the gangster life he used to lead...

Of course, a story this maudlin could go all the way from slapstick comedy to tragic melodrama. Will the pop group suddenly become world famous? Will the man's re-emergence cause a yakuza war? Are there copious amounts of death, bullets and sex? NO. This is a Nobuhiro Yamashita film. Which means we get a bit of slapstick and melodrama, but never outrageously so. The people seem real, the places they live in seems real, and whenever the story takes a groan-worthy turn, there will be some caustic, wry humor to soften the blow. Or, when necessary, to harden the blow.

Japanese cinema is often rightfully criticized for looking like crap, but that does not apply to La La La at Rock Bottom. Being down-to-Earth is no excuse for looking ugly apparently, and while the film is never flashy, and its locations often ugly, it all looks... pleasant, for fear of starting to overuse the word.

Lead actor Subaru Shibutani may be a newbie in films, but he is very good here, plausibly selling his healing process from stumbling harmless zombie back to dangerous thug. The tough young widow is played by Fumi Nikaidô, who you might know as the Yakuza starlet daughter in Sion Sono's Why Don't You Play in Hell, and she is similarly eye-catching here, albeit in a lot less glamorous way. Both actors have a nice tug-of-war going between them, with Nobuhiro Yamashita once again coaxing great natural performances out of everybody.

All in all, La La La at Rock Bottom is good, pleasant fun. Not laugh-out-loud funny, not soul-rendingly devastating, but very well made, and treating its audience as a bit more intelligent than usual. Definitely recommended!

The International Film Festival Rotterdam had the world premiere, with star Subaru and the film's band live playing some songs after the Q&A. While that may inflate the score somewhat,Rotterdam audiences voted the film into the current top-10 with a solid 4.0 out of 5. 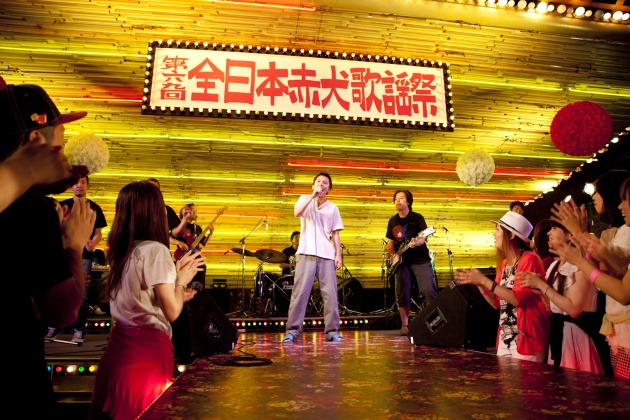