Something funny happened on the way to delivering a found-footage time-travel movie for teenagers: it grew a heart and developed a conscience.

Project Almanac (formerly titled Welcome to Yesterday) features science nerds, unrequited crushes, and an extended concert sequence. All the principal players are teenagers; adults are glimpsed only on occasion for brief bursts of time. The action revolves around high-school tomfoolery by day and scientific experiments in a basement by night. The footage is shot largely in the style of a child playing with a new toy.

And yet, out of that agonizing and distracting visual mess, something good and pure gradually emerges, maybe not enough to salvage the movie as a whole, but sufficient to give pause to dismissing it altogether.

The set-up involves four childhood friends, now in their final year of high school. David Raskin (Jonny Weston) is the smart, extremely scientific one; he has been accepted to M.I.T., but with only a partial scholarship offered, he has no idea how he will be able to afford it, especially since his widowed mother is out of work. Quinn (Sam Lerner) and Adam (Allen Evangelista) are his interchangeable, somewhat dimmer friends; they both serve as loyal comic relief. David's younger sister Christina (Virginia Gardener) is the chief camera operator. By a stroke of luck, the group is soon joined by Jesse (Sofia Black-D'Elia), David's longtime crush turned possible authentic love interest.

One day David discovers an old video camera in the attic, evidently belonging to his late father, and then watches a 10-year-old tape containing footage of his 7th birthday party. With some shock, he catches sight of ... himself! From there it's a relatively short hop, skip, and a jump to uncovering blueprints for a time machine (?!) and building it in the basement. 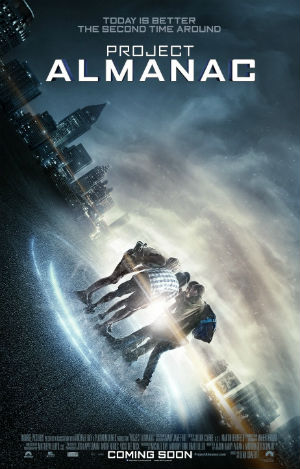 Once the machine is assembled, one thing leads to another and the group soon finds themselves merrily tripping through the recent past -- for some reason I didn't catch, they can only travel up to three weeks in time -- and "fixing" things that need fixing in order to better their lives, as any normal teenager might do.

These are good kids, so their impulses are fun and generous, and (mostly) only benefit themselves and others. (Even a "payback" is more of a prank rather than a malicious act.) Inevitably, though, the growing desire and opportunity to correct their own mistakes leads to trouble.

Jonny Weston shines as David; it helps that his is the only character with more than one layer to be revealed. That being said, it's still a very solid performance that earns empathy for the swirling emotions that leak out of his very restrained personality as the troubles start to multiple.

Making his feature directorial debut, Dean Israelite gets the credit for the decision to stop the rampage of found-footage, occasionally, and allow the camera to sit still. It allows the eyes to rest, at least once in a while, though it made me wish the entire movie were shot in more traditional narrative style instead of working so hard to distinguish itself visually.

My reservations about found-footage movies aside, Project Almanac eventually asserts itself emotionally, first quieting down the party-hearty mode and then -- shocker! -- allowing the characters to think about their actions and try to do the right thing, no matter the cost to them individually. On that score, it's a refreshingly mature teen movie.

The film opens wide in theaters throughout North America on Friday, January 30. Visit the official site for more information.